Pulse crops are important in rotations across Western Canada. When properly inoculated, pulse crops can fix a large portion of their nitrogen requirements, and often extend those benefits to the next crop.

To maximize the benefits, selecting the right inoculant for the right crop, and proper handling and application, are important.

“A specific type of bacteria called Rhizobium bacteria works together symbiotically with the crop to produce nitrogen in the plant from surrounding air in the soil pore spaces in the soil rooting zone,” says Dale Risula, provincial specialist, special crops, with the Saskatchewan Ministry of Agriculture. “The bacteria will infect a root thread and begin to form a nodule in the root of the plant. The nodulation becomes apparent usually within three weeks after planting, and that is when the plant begins to start fixing N [nitrogen].”

The Rhizobium bacteria are not very mobile in the soil, so the inoculant has to come into contact with the developing seedling rootlets for infection and nodule development to take place. There are also specific species of Rhizobium bacteria required for different legume crops including pulses and forages, so selecting the right type for inoculating specific crops is important (see Table 1). Most commercial inoculants are either single strain for one specific crop, or dual or multi-strain that may be suitable for more than one crop. Check product labels before selecting a particular inoculant and follow application directions.

There are various types of inoculants available, each with different handling and application requirements. Inoculants are living organisms and must be treated with care. Factors like heat, sunlight and certain chemicals such as seed treatments and fertilizers can kill the bacteria, and storage conditions can also impact the life of inoculants.

Peat-based powders are fine powders that contain a certain number of Rhizobium bacteria per gram and usually require the addition of a commercial sticker to stick the inoculant directly to the seed. These inoculants are usually dribbled or sprayed onto the surface of the seed after the seed is moistened, which can be done in a tub or cement mixer. There are also peat-based powders with pre-formulated stickers that can be applied directly to the seed while it is being augered or when the seed tank is being filled. Liquid-based inoculants are another option that can be applied directly to the seed.

“Another inoculant type that is starting to be quite popular are granular based that can be metered directly into the furrow at seeding,” says Risula. “The consideration is growers need to have a separate tank to meter the inoculant in order to apply it.” You also have to be careful not to mix the inoculant with granular fertilizer because if you do it will likely kill the inoculant. One other type is pre-inoculated seed, which usually comes encapsulated with a special coating.

“Research done on the performance of these different types of inoculants indicates they all work well, particularly under good conditions with good soil moisture,” says Risula. “In some cases where soil conditions are dry, granular inoculants have shown better performance than others. Granular inoculants tend to produce inoculation throughout the entire depth of the root, not just by the seed. We recommend that growers use inoculants every year at the recommended application rates. The cost of inoculants is inexpensive investment for ensuring optimum N fixation for maximizing yields.”

For most pulse crops, there is usually adequate N in the top six inches to allow the initial growth to take place until the crop starts to fix its own N, except for dry beans. “Dry beans tend to be a poor N fixer in comparison to other pulse crops, so a lot of growers will add a starter N application of about 50 lb. N/acre separate from the seed,” says Risula. “However, this is not required for other pulse crops.”

For soybean crops, inoculants are very important, particularly in the first few years, since the bacteria are not typically found in soils in Western Canada. “The first question I ask growers is whether or not they are a new soybean grower,” says Dennis Lange, farm production advisor, crops with Manitoba Agriculture, Food and Rural Initiatives (MAFRI). “If they are a new grower and are seeding soybeans on a field that has never had soybeans before, then they should really be applying a granular inoculant with a liquid inoculant. These two different forms infect the root differently through the growing season, making the combination much more important.”

The liquid inoculant goes on with the seed, and is much more beneficial early in the season. The granular goes on separately in a separate box on the seeder and tends to work a bit later in the season. “By applying the combination, you are giving yourself a bit more insurance, rather than putting everything on with the seed and hoping nothing goes wrong,” notes Lange. “This is especially important in a really wet spring where some of the seed-applied inoculant may wash away and reduce nodulation and N fixation.”

Lange adds that if growers don’t have access to granular inoculants, then a liquid and peat-based combination is a good alternative. “The type of inoculant is not as important as ensuring proper bacteria numbers, which is why the combination of liquid and granular inoculants is really important,” he says. “There are also extenders available that various companies use to give you a longer seeding window in case the weather turns and you can’t get it all seeded at the ideal time. Ideally, soybeans should be seeded as soon as reasonably possible after inoculating. Most growers use the full rate of inoculants every year, because it is still cheap insurance when it comes to growing soybeans and other pulse crops.”

Although very rare, Lange did have a situation in 2011 where a new grower did not apply an inoculant because he assumed the treated seed was already inoculated. “The question was whether or not a nitrogen application of 100 lb./ac could rescue the crop, so John Heard (soil fertility specialist, MAFRI), Joe Peters from KR Crop Check and I did a small replicated trial to see what the results would be,” says Lange. “The main purpose of inoculation is to provide the plant with N throughout the growing season. If you put all of the N on at the beginning of the season, the soybean crop uses it for growth but may run out of N by the time it gets to the early pod filling stage or R3 stage.”

Soybean plants use anywhere from 150 to 200 lb. N to produce a 35-bushel crop and the study shows it makes better use of the N for yield at pod fill stage rather than earlier in the season. “Applying fertilizer is a rescue treatment and not something we recommend growers do,” says Lange. “What is most important is making sure an inoculant is applied in the right form and making sure the bacteria numbers are high enough to ensure the plant has N throughout the growing season.” 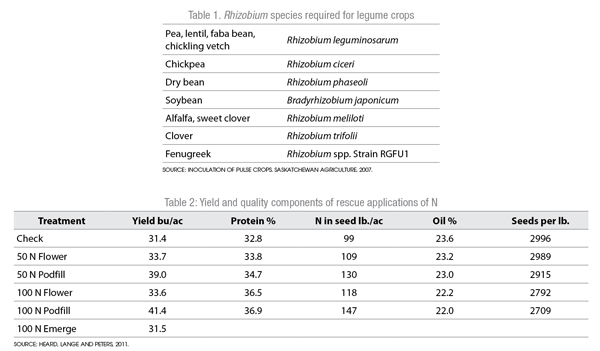 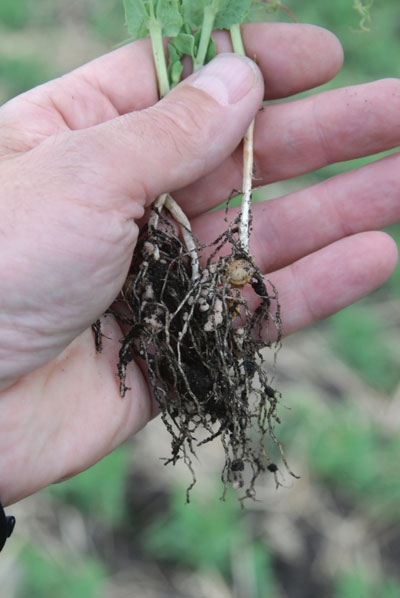 A well-nodulated pea crop is the key to high yield. When properly inoculated