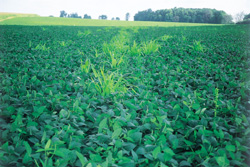 Growers are seeing more diverse weed problems than in the past, and many are
seeking effective management strategies to cope. With the advent and adoption
of reduced and no-till production systems, growers are facing more challenges
as they attempt to control a seemingly diverse and expanding list of problem
weeds.

In the recent past, the industry has had to deal with Group 2 resistance, particularly
in ragweed, pigweed and eastern black nightshade. In 2003, the subject of glyphosate
resistance in Canada fleabane in the US, merely as an industry-wide 'heads-up'
surfaced late in the year. Waterhemp also came up on the radar screens of weed
specialists and government extension personnel.

Today's newest 'problem' weeds include volunteer Roundup Ready corn, wirestem
muhly, wild carrot, chickweed, cleavers, dandelion, prickly lettuce and common
waterhemp. Many of these, like chickweed and prickly lettuce, are not as new
as weeds like cleavers or common waterhemp, but in terms of their impact on
crop yield, they all warrant our attention.

Wirestem muhly
Although it has not been a widespread problem, wirestem muhly is one of the
weed species that has been gaining prominence in recent years. The good news
is that in two post-emergence studies in corn, glyphosate in Roundup Ready corn,
Liberty in LibertyLink corn and Option in conventional corn all provided greater
than 95 percent control. Ultim, at below 60 percent and Accent, at just 50 percent
control, rounded out the list. In soybeans, we saw excellent post-emerge control
from glyphosate in Roundup Ready and Venture in conventional soybeans, with
more than 95 percent control with two applications, and nearly 90 percent control
with one.

Wild carrot
This is another weed that is not new but is proving to be an emerging challenge
for growers. The results with pre-plant applications of glyphosate have been
variable. A pre-plant tank-mix of glyphosate plus either Broadstrike or Pursuit
provides approximately 75 percent control in a pre-plant program with the rest,
including tank-mixes of glyphosate with Sencor, FirstRate or Conquest, all coming
in at or below 60 percent.

In post-emerge applications in soybeans, the choices were somewhat limited,
with just 80 percent control using 2.0L/ac of glyphosate. Classic came in second
at about 75 percent with Clean Sweep, Pursuit and FirstRate all coming in at
less than 50 percent control.

Chickweed
Wheat growers are seeing more of a problem with chickweed. Pre-plant applications
of glyphosate at 0.5L/ac, 0.75L/ac and 1.0L/ac in the fall prior to seeding
wheat all provided near 100 percent control. Refine Extra applied after wheat
emergence in the fall or early in the spring provided nearly 100 percent control.
A tank-mix of Buctril M, Mextrol or Badge plus one-third rate Refine Extra in
both fall and spring applications, controls roughly 85 percent of chickweed.
Even at 60 to 80 percent the rate of Refine, we see chickweed control that is
clearly above 90 percent in wheat, and that is in both spring and fall applications.

Cleavers
With just two experiments in winter wheat, we found Attain and Prestige to be
the best with near 100 percent control. Frontline provided better than 95 percent
control and the dicamba based herbicides, Banvel, Dyvel and Target all gave
above 90 percent control. Growers are advised that wheat may be sensitive to
the dicamba based herbicides especially as the time of application is delayed
in the spring.

Dandelion
An old favourite that seems to be on a come-back is dandelion, which has been
the subject of considerable study with a summary of six experiments in determining
spring pre-plant rates, alone. Across the board, with spring or fall applications,
we are finding that 1.5L/ac of glyphosate alone will provide more than 90 percent
control of dandelion.

Mixing glyphosate at 1.0L/ac with either Amitrol, Banvel, Distinct or 2,4-D
ester provides roughly the same control as simply increasing the rate of glyphosate
to 1.5L/ac in experiments completed in both the fall and spring. As for formulations,
whether it was Transorb, Touchdown iQ, Vantage Plus, Credit, Glyphos or Clearout
41 Plus, they all seemed to perform similarly. In wheat, Estaprop fared best
with 90 percent control averaged from three experiments.

Prickly lettuce
With prickly lettuce, the word again is glyphosate, particularly in pre-plant
and post-emerge soybeans. In corn, Marksman was the best with near total control,
while Summit, Pardner + atrazine, Distinct and Shotgun also came in either above
or slightly below 90 percent. In another experiment, we also saw total control
using Accent + Callisto + atrazine, with Accent Total, Ultim Total and Option
plus Distinct, doing quite well.

Common waterhemp
Common waterhemp is relatively unknown compared to others, which is why there
is such an interest in its control. Josh Vyn and I have studied it in corn and
soybeans, with pre-emergence and post-emergence applications.