Post-harvest control of kochia offers an additional window to help reduce the seed bank. Kochia is the 10th most abundant weed in Western Canada, and because kochia flowering is photoperiod controlled and has indeterminate growth, flowering and seed set continues in the fall until the plant is killed by frost.

“If kochia is ‘decapitated’ during harvest, prior to the seeds becoming mature, seed production can be reduced as seeds on the harvested portion will not be viable. Any vegetative material not harvested, however, will continue to mature and will be able to produce viable seed,” says Ryan Low, a graduate student at the University of Alberta.

Post-harvest kochia regrowth and seed set is a real possibility. James Mickelson of the Southern Agricultural Research Centre at Huntley, Mont. reported in a Weed Science Society of America article that uncontrolled kochia plants that regrow after a small-grain harvest can produce a substantial number of seeds. His research in the early 2000s found that an average of 4100 seeds per plant were produced between harvest (late July to mid-August) and the first killing frost (late September) at three locations in Montana.

Low says the good news is that since the plants are limited in height (usually 15 cm, the height of the combine header) and have reduced lateral branching, they are unlikely to become tumbleweeds, and the seed will remain near the parent plant. However, that doesn’t negate the fact that kochia has been shown to reproduce after harvest.

“If seed deposition could be prevented by reducing populations before they become mature and set seed, kochia populations in subsequent years are likely to diminish,” Low says.

Mickelson’s experiments were conducted to determine the optimal timing of post-harvest herbicide applications to prevent kochia from producing viable seeds. Herbicide treatments were applied at three timings from late August to mid-September. The most effective treatments were glyphosate, and paraquat (Gramoxone) applied at the
second application timing (late August to early September). These treatments reduced kochia seed production by 92 per cent or greater at each site. The kochia in this trial were susceptible to glyphosate.

In Mickelson’s research, kochia regrowth had sufficient leaf area for herbicide absorption, but few viable seed had been produced. Herbicide treatments at the first and third application timings were generally less effective and more variable in reducing kochia seed production.

In southern and central Alberta, Low conducted research on post-harvest kochia control on two wheat fields in 2011 at Hussar and Cluny, and two pea fields near Lethbridge and St. Albert in 2012.

Low says that after cutting kochia to 15 cm height at harvest, kochia leaves remained green, and flowers and immature seeds were present in the stubble. He says treatments applied immediately after harvest “caused visual injury compared to untreated controls but control was difficult to separate from natural senescence of the plants.”

By the third week after harvest in mid-September, kochia plants were beginning to dry down and seed was maturing. When herbicides were applied three weeks after harvest, the kochia plants had begun to mature, lose leaves and start seed maturation.

“None of the herbicide treatments used in our study showed a significant difference in seed reduction compared to the untreated check, and it was our conclusion that herbicides applied post harvest are not an effective option for kochia population control in Western Canada,” Low says.

The difference between Low’s trials and Mickelson’s is likely due to the differences in kochia growth after harvest. Low observed that no re-growth of kochia plants occurred after harvest, and that seed set was from flowers left in the field at the time of harvest. Mickeleson’s trials found that kochia had plenty of time to regrow after harvest and set seed before a killing frost in September.

Another Montana State University study at the Southern Agricultural Research Centre at Huntley in 2012 and 2013 produced similar results as Mickeleson’s earlier studies. Researcher Vipan Kumar and graduate student Prashant Jha applied post-harvest herbicides to kochia on spring wheat stubble. The wheat was seeded on April 10, 2012 and April 6, 2013, and harvested on Aug. 14 and Aug. 16 respectively.

Addition of atrazine to dicamba improved late-season control (80 per cent) and seed reduction (78 per cent) compared to dicamba alone, and reduced seed viability and 100-seedweight. Dicamba alone, dicamba + 2,4-D, or diflufenzopy + dicamba + 2, 4-D applied at the early bloom stage were ineffective, with less than 70 per cent late-season control, less than 45 per cent biomass reduction, and less than 55 per cent seed reduction of kochia.

In the absence of a post-harvest herbicide, Kumar found that uncontrolled kochia plants at a density of eight to10 plants per square metre contributed over 100,000 seeds per square meter back to the soil.

Kumar and Jha’s research was published in Crop Protection Journal (Crop Protection 71, 144-149) in February 2015, and the researchers concluded that: “The effective postharvest-applied herbicides investigated in this research should be utilized to prevent late-season kochia seed bank replenishment in wheat, and as a component of herbicide resistance management program for the containment of glyphosate- and/or acetolactate synthase (ALS)-inhibitor-resistant kochia in wheat-based crop rotations in the U.S. Great Plains.”

For Canadian farmers struggling with kochia control, given the conflicting research results, the best advice is likely to monitor kochia regrowth after harvest. If new growth is evident and the likelihood of the new growth developing seed before a killing frost occurs, a post-harvest application might be warranted, based on the Montana experience. But if regrowth is limited, and harvest is late, post-harvest herbicide application likely wouldn’t be warranted. And always leave a check strip. 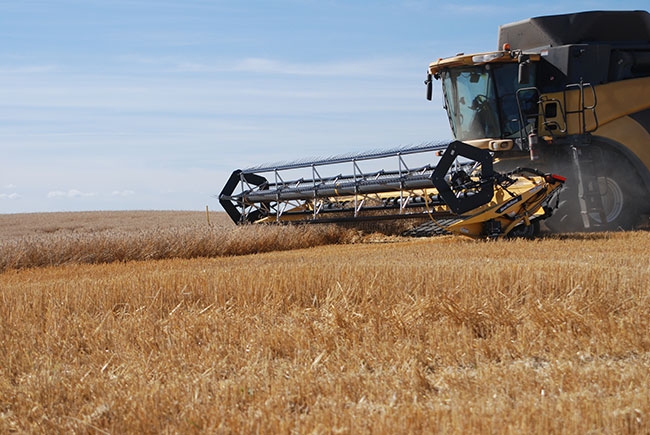 Kochia has been shown to reproduce after harvest. Post-harvest control of kochia offers an additional window to help reduce the seed bank.
Print this page