Results from a 12-year Saskatchewan wheat disease survey show weather trends were a key factor in increasing leaf spotting severity. The study’s findings can help wheat breeders and growers in dealing with this important disease complex.

Leaf spotting is very common in Prairie wheat crops and can result in significant yield and quality losses when conditions favour disease development. It is caused by a group of pathogens that usually occur together, including: the tan spot pathogen, Pyrenophora tritici-repentis; the septoria leaf blotch complex pathogens, Phaeosphaeria nodorum, Mycosphaerella graminicola and Phaeosphaeria avenaria; and the spot blotch pathogen, Cochliobolus sativus.

The study’s objective was to evaluate the leaf spotting complex in common and durum wheat fields across all 20 crop districts and all soil zones in Saskatchewan, from 2001 to 2012. The researchers wanted to see how the amount of leaf spotting and the prevalence of the different leaf spotting pathogens were related to the wheat species, field location, previous crop, tillage system and weather patterns, across the province and over time.

To collect the field data, randomly selected commercial fields were surveyed each year, for a total of 1657 fields after 12 years. Overall, 21 per cent of the fields were durum wheat and 79 per cent were common wheat.

For each field, the surveyors determined the previous crop in the rotation based on the crop residue type, and they estimated the tillage intensity based on the residue amounts. Because of time constraints, it wasn’t possible for the surveyors to also contact the farmer to get information about such things as the crop cultivar, fertilizer practices and fungicide use in the wheat field.

Fernandez explains that surveys have advantages and disadvantages compared to plot research trials. “Surveys are great because you can get far more information, especially with this kind of province-wide survey. But at the same time, the data are very difficult to analyze because there are so many confounding effects [unmeasured factors that can directly or indirectly influence crop disease]… For instance, fertility could have a huge effect on leaf disease [for example, by affecting disease resistance or influencing canopy density], and we don’t have fertility information for our study.”

During the survey period, Saskatchewan experienced changing weather patterns. In some years, conditions were so dry that there was hardly any leaf disease, while unusually wet weather occurred from 2010 to 2012. Temperature varied but didn’t show an overall trend up or down over the 12 years.

One thorny issue for the researchers was how to get accurate weather data for each field, given that most of the fields are not near Environment Canada weather stations. Again, innovative thinking came into play.

“This approach is much more accurate than just relying on the data from the Environment Canada weather stations,” explains Fernandez, adding, “Our study represents the first time this approach has been used in crop disease research.”

As expected, leaf spotting was widespread. On average over the 12 years, 43 per cent of the surveyed fields had an economically damaging level of leaf spotting infection.

“We confirmed that Pyrenophora tritici-repentis, which causes tan spot, was the main leaf spotting pathogen throughout the province in all years of this survey for both common and durum wheat,” Fernandez says. In every year, this pathogen occurred in at least 94 per cent of all fields where leaf spotting pathogens were found, and in most years it occurred in 100 per cent of those fields.

Averaged over the 12 years, the percentage of fungi isolated from the leaf samples was highest for Pyrenophora tritici-repentis (63 per cent), followed by Phaeosphaeria nodorum (15 per cent), Mycosphaerella graminicola (10 per cent), Cochliobolus sativus (seven per cent), and Phaeosphaeria avenaria (four per cent).

The researchers also confirmed that, for common wheat, leaf spotting severity increased going northward and eastward, so it was more severe in regions that tended to be wetter. That pattern was also true for P. nodorum. In contrast, P. tritici-repentis decreased eastward, and C. sativus decreased northward and was more common in the southeast. In durum, the pathogens didn’t show trends with latitude or longitude.

Overall, leaf spotting severity tended to increase in both durum and common wheat over the 12 years. The greatest increases occurred in the Brown and Dark Brown soil zones, the main areas where durum wheat is grown.

Although leaf spotting severity was influenced by wheat species, field location and previous crop, it was most affected by the weather. Greater severity was associated with higher precipitation and warmer temperatures.

The increase in severity was not because of changes in P. tritici-repentis infection levels. Instead, it was due mainly to increased infection by P. nodorum and especially C. sativus.

Cochliobolus sativus was the leaf spotting pathogen most affected by the changing weather patterns during the survey. As well, it was the only pathogen that showed a marked increase over the 12 years. This increase coincided with the wetter, warmer conditions in 2010 to 2012 and peaked in 2012. In that year, C. sativus occurred in 97 per cent of common wheat fields and 94 per cent of durum fields where leaf spotting pathogens were found – so it was in almost as many fields as P. tritici-repentis.

Based on these results, Fernandez concludes that if wet, warm conditions occur for a number of growing seasons in a row, then C. sativus could become an important leaf spotting pathogen in Saskatchewan, especially in durum wheat.

“I had seen reports that this pathogen was increasing in other areas of the world, such as South Asia, to the point that it is becoming a major problem. In that part of the world, it is associated with wet and warm conditions, which was exactly what was happening here,” she notes.

Fernandez emphasizes that C. sativus is not new to Western Canada. “It is the main root rot pathogen of wheat, infecting the roots and crowns. Root rot has been increasing in Saskatchewan for many years, especially in durum wheat. It is favoured by dry, hot weather – the opposite of the moisture conditions that favour leaf infection by this pathogen.

“Cochliobolus sativus also infects wheat kernels, causing black point, which is a main downgrading factor. If we get wet weather during kernel development, then we could get a lot of black point because of increased availability of inoculum of that pathogen.

“So, the pathogen has always been here, but for the most part conditions were not conducive to the development of leaf spots caused by this pathogen.”

Fernandez also points out that, not only is C. sativus a common soil fungus, but its host plants include barley, other cereals, wheatgrass and other forage grasses, in addition to wheat. As well, the pathogen is able to survive in residues of non-grassy crop types such as pulses and oilseeds.

So, C. sativus is common and increasing in Saskatchewan, and it can attack different parts of the plant, depending on the weather.

Implications and next steps
What might the study’s findings mean for Saskatchewan wheat growers and breeders?

Fernandez and her team are currently preparing to publish a scientific paper on this study. They are also continuing to work with SCIC. “It is wonderful to have this kind of interaction and co-operation between two completely different organizations with very different mandates. It also points to the efficiencies and economics of having this type of partnership,” Fernandez says.

Survey data collection on leaf spotting and Fusarium head blight is continuing. In fact, based on the findings from the 12-year study, SCIC has agreed to collect even more information about each surveyed field by contacting the farmer for details about the crop production practices used. SCIC has been conducting this expanded survey in 2014 and 2015. Although this is very time-consuming for SCIC staff, the extra information could help increase understanding about the diseases. Fernandez has published the 2014 leaf spotting results in the Canadian Plant Disease Survey.

She and her team are also partnering with SCIC to study Fusarium damaged kernels and ergot. SCIC has provided its grading data on these two diseases from 1998 to the present, and the researchers are analyzing the data for long-term trends. 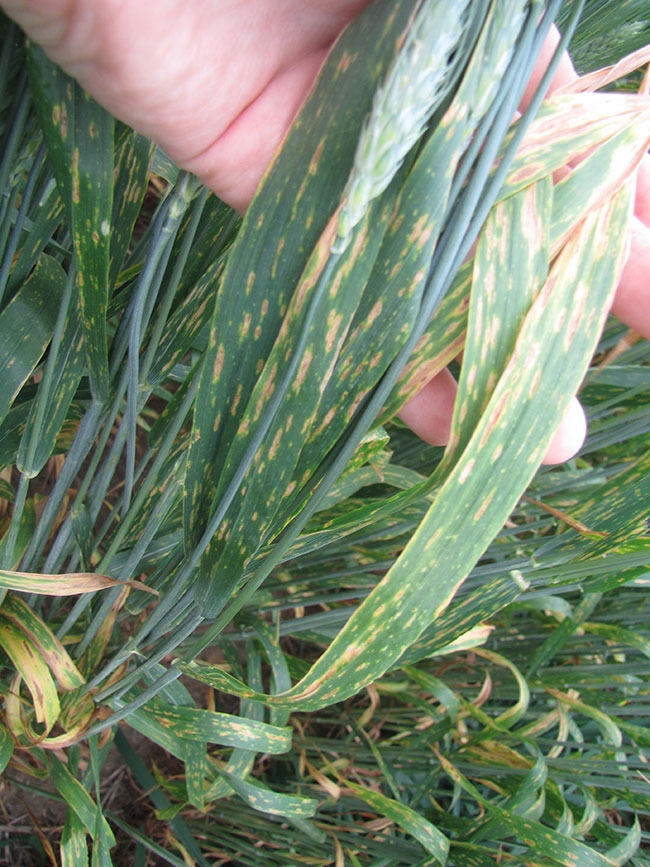