Researchers are testing polycultures as a strategy for improving forage biomass and quality, and finding low-input solutions for weed control, nutrient and moisture management. After two field seasons of research to evaluate polycultures or cocktail mixes of annual forage plant species in semi-arid regions, early research results are promising.

“We have two years of field data collected and are in the third year of our polyculture research project,” Schellenberg explains. “The first two years were under much moister conditions than we have this year, with recent maps showing that the Swift Current area in early July 2015 has less than 40 per cent of moisture. For research purposes, having a range of moisture conditions during the research certainly helps our evaluation and provides a broader picture of what we might expect under the semi-arid conditions in our area.”

In the project, 12 annual forage species considered somewhat common to the area were selected for the trials. The crops are sorted into four groups: warm season grasses corn, millet, sorghum; cool season grasses barley, forage oats, triticale; nitrogen fixers field pea, forage pea and hairy vetch; and root crops kale, radish and turnip. All 12 species are being grown as monocultures and then mixtures of two, four, eight and 12 species to determine the optimal mix of crops. Control plots containing two perennial species mixture of meadow brome and alfalfa are included for comparison to the annual mixes. In 2016, barley will be seeded across all of the plots, and researchers will be evaluating soil improvements such as changes in organic matter, nutrient levels and other factors that are expected to be a result of polyculture production.

Results so far show that some species are outperforming others; but overall, polycultures are yielding higher quality biomass and increased productivity over monoculture plots. “In the spring, the forage quality among the mixtures seems to be similar. However, as the season progresses into August, we are seeing differences in the quality with some mixtures having better digestibility ratings and higher quality,” Schellenberg says. “We are also seeing a relationship between an increasing number of functional groups of species and an increase in biomass production. At the end of the 2015 field season, we should have a better idea of the species mixtures that are providing the benefits we are looking for in terms of biomass and quality, weed control, nutrient and moisture management.”

Overall, early results are showing better weed suppression with more species in the mix, such as mixtures of eight or 10. Schellenberg believes this is likely due to increased competition between the crops and weeds for space and resources. “Species such as hairy vetch, which is growing more like an annual rather than a biennial in our system, seems to be forming a nice mat on the ground and is providing good weed control. We are also seeing some alleleopathic potential with triticale, radish and turnip.”

Root crops such as radish and turnip are also doing quite well at suppressing weeds, but are not performing as well as expected for nutrient management. Brassica root crops were included in the mixtures to be able to make other nutrients besides nitrogen (N), such as trace elements, more available to the system. The root crops were expected to pull in micronutrients during the growing season, left to die and decay over winter, releasing nutrients for use by other plants in the system the following spring. However, so far researchers have not noticed any benefits for micronutrients, although phosphorus levels have increased.

Researchers have also not seen the impact on N that was expected. Schellenberg suspects it may be that the ratio of species doesn’t include a large enough proportion of legumes to get the impact they were looking for. For this project, all species were included at a 1:1 ratio (at 100 live seeds per metre) to keep the comparisons more even. In the future, other proportions may be recommended to achieve the nutrient effects expected.

In terms of production performance, some species may be removed from the recommended list by the end of the trials. Researchers have seen very poor establishment with sorghum and kale in the research plots under local conditions, so they probably don’t have the best fit.

“Corn is another crop that is doing okay in our area, but we have not been able to achieve a full grown plant that some producers expected,” Schellenberg adds. “We are getting a reasonable two or three feet of growth before the plants dry out by the end of August. As a warm season crop, corn typically does a lot of its growth in August. However, in our area we don’t have sufficient moisture even in wet years to bring corn plants to full growth.”

In 2015, researchers added another component to the research by splitting the plots into two and comparing direct seeding to cultivation prior to seeding. In the first two years of the project, all plots were direct seeded; however researchers noticed that in adjacent cultivated plots productivity seemed to be better.

“So far, it appears that where we have done some cultivation, more seedlings have emerged as compared to the zero-till plots,” Schellenberg explains. “Although the soil moisture is similar in the plots, we suspect there may be a possible nutrient release from disturbing the soil that is making a difference. We will be comparing biomass and quality for all plots at the end of the season, and will have a better understanding of whether or not cultivation as
compared to no-till makes a difference.”

To measure forage quality and biomass production, the first forage samples are collected in mid-July and the final forage harvest is completed at the end of August. Samples are evaluated for nutritional and quality aspects. Schellenberg emphasizes the trials are designed for forage production, not grain production.

Although the overall performance of polyculture mixtures is usually much better than monoculture crops, triticale is one crop that is performing well as a monoculture. “In most of the trials, the mixtures with the greater number of species are providing the best quality,” Schellenberg explains. “With a monoculture crop, the growth and nutrient quality peaks at one time in the season and typically slumps in August, compared to a mixture where different crops grow at different rates and typically continue growing through August.”

Schellenberg is pleased with the results so far and is seeing similar benefits to polycultures of annual forages as with perennial polycultures. “We are trying to imitate Mother Nature using annual crops as opposed to native pasture in this study. The mixture of crops provides something different, with the roots growing at different depths and accessing more of the soil profile for both minerals and water. This opens opportunities to utilize the environment more fully, and provides a bit of an insurance policy particularly in drier years like 2015. Under drier conditions, the crops with deeper roots can access resources at a greater depth, and typically bring moisture to the surface and make it available for other more shallow rooted crops.”

To further explore the benefits of diverse cropping systems, Schellenberg has received funding for a new project that will begin in the fall of 2015. This project will focus on using winter annual crops, such as fall rye, winter wheat, winter rapeseed and winter pea. “The winter annuals will be seeded at the end of August into barley stubble after harvest,” Schellenberg says. “We will be comparing various mixtures of winter annuals to monoculture control plots to evaluate biomass production, quality and other benefits.”

At the end of 2015, Schellenberg will have three years of field data and expects to be able to make recommendations on the best polycultures and species mixtures from the trials. Early results have been shared with producers through various field tours over the past three growing seasons.

“We know from other research work on perennials that the right combination of species and a more diverse stand does show an increase in productivity over a monoculture perennial crop. We expect to find similar results with annual forages, and plan to provide information on reliable polycultures for semi-arid regions and the benefits for producers in 2016.”

Schellenberg adds they are also looking at utilizing these mixtures of plants as a way to improve grain yields by including an underseeding of a low growing legume perennial that will provide ongoing N benefits. “We are just starting to explore diversification in the field for both forage and grain production and, so far, there are benefits for producers. As an ecologist, I believe there are benefits to diversifying crop stands, and polycultures need to be explored more extensively than we are presently to understand all of the benefits.” 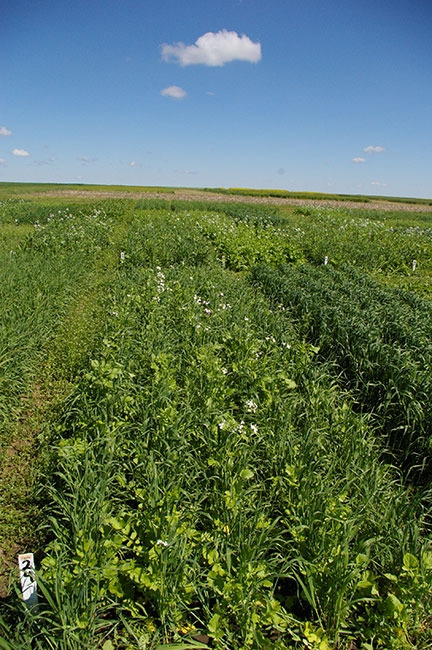 Polyculture plot with an eight species mixture. Researchers are testing polycultures as a strategy for improving forage biomass and quality.