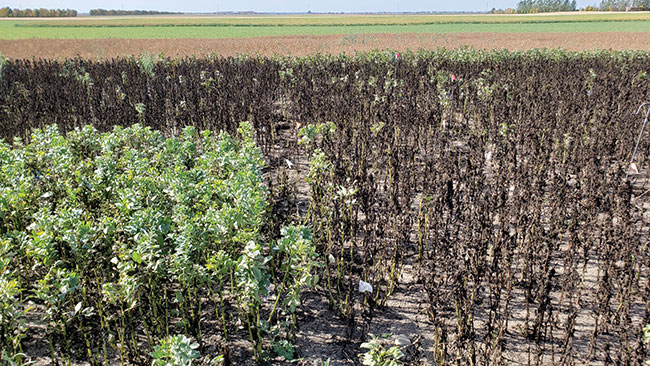 Fababean plots showing an early treated plot on the left that was treated with an insecticide at an early density of aphid infestation, and the untreated control plot on the right where the aphid population was allowed to continue unchecked, mid-September 2019. Photos courtesy of Tyler Wist.

Pea aphids in pulse crops not only cause direct damage from feeding, but also cause indirect damage through transmission of viruses, such as Pea Seed-borne Mosaic Virus (PSbMV). PSbMV symptoms on pulses include mosaicked leaves, delayed or uneven crop maturation, and various forms of seed and pod deformation. Although pea aphids are not always present in fields every year, they have been confirmed across the pea, fababean and lentil-growing areas of Saskatchewan since 2017, causing damage and yield losses at higher populations.

“Diseases caused by viruses such as PSbMV are tricky, and people tend to presume that plant viruses are not here in the Prairie provinces,” explains Sean Prager, assistant professor and entomologist with the University of Saskatchewan. “Although viruses really haven’t been enough of a problem to be concerned, there are records even back to the 1960s that report some incidences of viruses. Pulses are a relatively [new] crop, and most of the other vectors, such as leafhopper or whiteflies, don’t occur in the Prairies. However, breeder records, such as those from Dr. Slinkard in the late ’80s, did report occasional viruses in pulses, which may have come up during the breeding process or during commercial seed production,” Prager says, adding there’s a postdoctoral fellow currently working on addressing this question. “Today, my lab has the expertise and mechanisms to test for viruses, and we are definitely finding some samples of peas and fababeans with PSbMV, but not with high frequency.”

The symptoms can be challenging to identify, and since the virus is seedborne, infected seed may not even germinate, so plants with the virus don’t always show up. There are different testing options, including a quick and easy commercial strip test, that growers and agronomists can use in the field to determine if an unusual looking plant is positive. Prager’s lab has several other tools available, including some sophisticated molecular biology tests using reverse qRT-PCR. Prager and his lab members have sequenced almost the entire genome of the PSbMV virus from samples from North Dakota and Saskatchewan.

“Although we can test for the virus, pea aphids are the primary vector causing transmission of the PSbMV virus in pulses in Saskatchewan,” Prager says. “We are concerned that if we are getting higher populations of aphids more often, then we will start to see the virus on a more common basis since we do not have resistance for any current varieties of pulse crops we grow. Therefore, controlling the vector or the aphids is a priority for controlling the pathogen. And the key to control is developing new and better economic thresholds. An accurate threshold will allow growers to optimize the timing of pea aphid control, reduce pesticide use, increase profits and will result in overall better integrated pest management.”

Prager and graduate student Ningxing Zhou, in collaboration with Tyler Wist, research scientist – field crops entomologist with Agriculture and Agri-Food Canada in Saskatoon, are in the second of a three-year project to establish economic thresholds of aphids on lentil and fababean. Field surveys for the presence of important aphid vectored Potyviruses, and controlled lab studies were conducted to evaluate the symptoms and damage of PSbMV. A nominal threshold has been established for lentil, but there is no existing threshold for fababean and little information about aphid in fababean. For field pea, there are two different thresholds: one for flowering and a second for early pod stage.

“There does not appear to be much in the way of plant resistance against aphids in the commercial pulses. Without available plant resistance, controlling the pea aphid vector in lentil and fababean is important, as they are capable of doing a lot of damage even without virus transmission,” Wist explains. “All it takes is one aphid to get the population started, because the pea aphids are all females who produce live aphids without any external egg stage. Within seven to 12 days, these new aphids reach maturity and can start their own hatch, leading to exponential increases in aphid populations, which stress plants. The aphids usually start to appear in crops in the first week of July, often only one individual per sweep net will be observed. However, aphids like hot and dry conditions, and populations can increase dramatically to damaging populations by the last week of July. A big rainstorm can knock aphids off the plant and reduce populations, and beneficial predators such as lady beetles and parasitoid wasps also help to reduce aphid populations. However, at high aphid densities, the beneficial predators just can’t keep up.”

As part of the project, Zhou counted aphid numbers on lentil and fababeans in 2018. She counted 1,200 aphids on a single fababean plant, with some single plants having more than 2,000 aphids. Wist adds that in 2017, counts of 1,700 to 2,000 aphids on individual fababean plants were documented. Although beneficial predators were also present, there wasn’t enough to provide control at those higher aphid counts. The project also included experiments at two locations to determine economic injury levels of aphids and to test the efficacy of three insecticides (lambda-cyhalothrin, lambda-cyhalothrin and chlorantraniliprole, and cyantraniliprole), in controlling pea aphids on lentil and fababean. The experiments included CDC Impulse lentil, a small red variety, and CDC Snowdrop fababean, a non-tannin variety. In Saskatoon, pea aphids appeared in lentils around the bud to early flowering stage, and a week later in fababeans around the early flowering stage.

“The highest yields came from the plots controlled early at the lowest density of 50 aphids per plant, with yields double compared to the highest aphid density,” Zhou adds. “Waiting to apply insecticides until populations reached over 1,000 aphids/plant resulted in complete yield loss. The fababean plots were sprayed once in 2018, while the lentil plots had a second follow-up application to keep the aphids at low density.”

Zhou says the team noticed in 2019 that lentil plots with more aphids tended to mature earlier than plots without aphids. “In the plots where aphids were controlled early, the plants stayed green longer.” Zhou used a sophisticated backpack sprayer with the same nozzles, flow rate and active ingredient used in commercial sprayers that should closely represent a real field application.

Wist adds that the lentil and fababean plots were located side-by-side in a commercial lentil field, so pea aphid populations may have been influenced by migration from the larger lentil field or neighbouring fields. In commercial fields, if growers sprayed a field of lentils for aphids and there were no other fields nearby, a re-infestation of aphids would be unlikely. Fababeans are later maturing and stay green longer, therefore aphids may migrate to the still green fababean fields as lentils and peas mature. 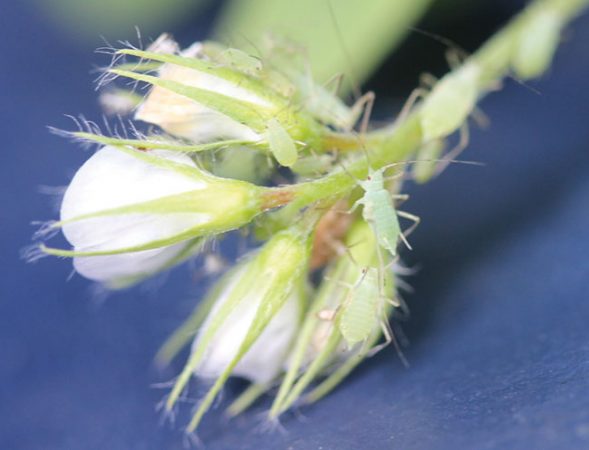 Next steps
“We are confident in the insecticide results and recommendations, but now we want to work on refining the economic thresholds. We certainly know when aphid populations are too high, but we want to refine the lower numbers to help decide how long to wait before spraying and densities get too high,” Prager adds. “Thinking about aphid population ecology, the ideal time is at population densities just below where aphids will start to cause damage. Because their numbers grow exponentially, waiting too long can quickly increase damage and yield losses. We expect sometime in the next year to have relatively good numbers and optimized economic thresholds that we can provide to growers to help with control decisions.”

Researchers are also trying to develop a fairly simple way to measure aphids in the field that will be reasonable for growers and agronomists. “Trying to count aphids on a plant is difficult and time-consuming, so we are working on sweep net counts and hope to translate that into something reasonable,” Wist adds. “Last year in lentils, we compared a 180-degree sweep net count of aphids to a hand count on one plant to try and establish a correlation. We measured and counted aphids in a half-cup, as well as wet weight in grams, similar to thresholds used in the U.S. We are trying to do the same thing in fababean, where we were getting cupfuls of aphids. We want to get to some type of reasonable proxy of so many cups or a particular weight measure that can be used as an economic threshold. For now, growers should be monitoring pea aphids frequently from the end of July to mid-August, and considering control options at higher population densities to reduce yield losses. It is also important to rotate between different classes of contact insecticides when controlling pea aphids to limit the development of insecticide resistance.”

Once the optimal aphid density and economic thresholds are established, the next step will be to develop and design a proper sampling and control plan, similar to cereal aphids. “The current thresholds we are developing are assuming no virus, so ultimately we would like to go back and look at the same thing with the virus added in,” Prager explains.

“There is the potential that if you have large aphid outbreaks you can also have an increase in the PSbMV virus. Aphid damage is due partly to population density and how many can be tolerated before damage occurs. However, with virus transmission, the question is how many aphids need to be on a plant before the plant gets sick. Once the plant is sick, there is no reverse course, therefore a lower economic threshold may be needed. And if there a lot of aphids, then those infected plants will serve as a source of inoculum for other aphids, potentially increasing the virus spread. Although the virus is not in every field and is tricky, it would be good to have this in mind to keep us ahead if increases of the PSbMV virus occur in the future.”