And although he says it’s still a work in progress, he’s justifiably proud of the results.

His efforts have earned him the 2017 Ontario Soil and Crop Improvement Association (OSCIA) Soil Champion Award, which is handed out annually by the OSCIA to recognize leaders in sustainable soil management.

“There is no one practice to farm conservation; everything has a part to play,” says Kaiser, who has a civil engineering degree from the Royal Military College and bought the first 300 acres of his farm in 1969.  “Sustainability has many components, but the preservation of top soil must be the final result.”

Today owned by Eric’s youngest son Max, Kaiser Lake Farms sits on the shores of both Bay of Quinte and Hay Bay - a recreational area for water skiing and wind surfing and also from where the Kaisers and their non-farming neighbors draw their water.

The challenges of the land, the unique location and Eric’s determination not to see erosion sweep his soil into the bay sparked his lifelong love affair with conservation. As a conventional farmer till the mid-1980s, he knew he wanted to evolve into no-till production, which meant systematically tile draining the land as quickly as he could afford to do so.

“The farm land isn’t good enough to support that kind of endeavor, but we have layers and pullets that gave us the financial wherewithal to do all of that over time,” he says. “We did infilling as late as 2013, so it continues to be a work in progress.”

“If I won the lottery, I would tile the land on two foot centres,” he adds. “Tiles are step one here, without tiles, nothing works.”

A long-time advocate of no-till planting, Kaiser says the key to doing it well is putting a new planter in the field every day. That means replacing missing or worn out parts daily and every winter, pulling the planter into the shop and disassembling every row unit for an overhaul.

“We farm like cash croppers, but we’re actually livestock producers so we have manure to spread,” he explains, which comes with big soil compaction concerns.

All equipment travels only on the farms own driveways and grass waterways, and there’s not a single piece of equipment on the farm that hasn’t been modified and improved somehow to be better suited to their land.

The Kaisers use an 8,000 gallon Nuhn quad-train manure spreader with radial tires at 14 PSI from front to back to spread their poultry manure after wheat harvest. As it’s applied, the manure is incorporated into the ground with a small, light disc that penetrates only about two inches into the soil. Then, cover crops are planted.

“We’re doing the best we can for compaction, which is a big issue especially as machinery keeps getting bigger,” he says. “But the livestock are an important part of this operation, and one of our guiding principles is integration of animal and vegetable protein production.”

The Kaisers feed their corn and wheat crop to their 30,000 layers and the 130,000 pullets they grow annually, and sell their soybeans to buy back meal for their poultry feed.

Their crop rotation has included cover crops since the 1980s, but it really became much more diverse after Kaiser met renowned soil scientist Jill Clapperton in 2003 when he served as chair of the Innovative Farmers Association of Ontario annual conference and she came to speak at the event.

Corn, soybeans and wheat on their own were not a rotation, she told him, so the experimentation began with crops like field peas, red clover, oats, barley, sudangrass, buckwheat, sun hemp, sunflowers, and tillage radish.

Peas and barley have worked well, and sunflowers have proven to both a successful cover crop and popular with the neighbors, who are welcome to come to the Kaiser fields and pick flowers for Thanksgiving and Halloween.

Other organizations like the Soil Conservation Council of Canada and the Quinte Soil and Crop Improvement Association have also recognized Kaiser’s work and he’s a frequent speaker and participant at conferences and workshops across North America.

Overall though, Kaiser says its dirt that has been his biggest challenge – the relatively impermeable soil that is 80 – 95 per cent silt and clay and has defined conservation efforts throughout his farming career.

“We never do the same thing every year, but we do the things we think are important for this farm,” says Kaiser, who believes the combine to be an essential farm management tool. “When you’re combining, you see every acre of every crop. You can see the effect of what you did and it allows you to plan for the future.”

That’s the same reason he encourages other farmers interested in soil conservation to just take the plunge and do so – and to do it front and centre on the farm so it can be seen every day. Cover crops and no-till aren’t new technologies, he argues, and if they’re implemented where they can be watched daily, it will help farmers figure out how to make improvements.

“Don’t hide it away, that’s a lack of commitment to something new you’re trying,” he believes.

Do you know someone worthy of the title Soil Champion? The submission deadline for the 2018 Award is September 1, 2017. For the application form and details, visit ontariosoilcrop.org 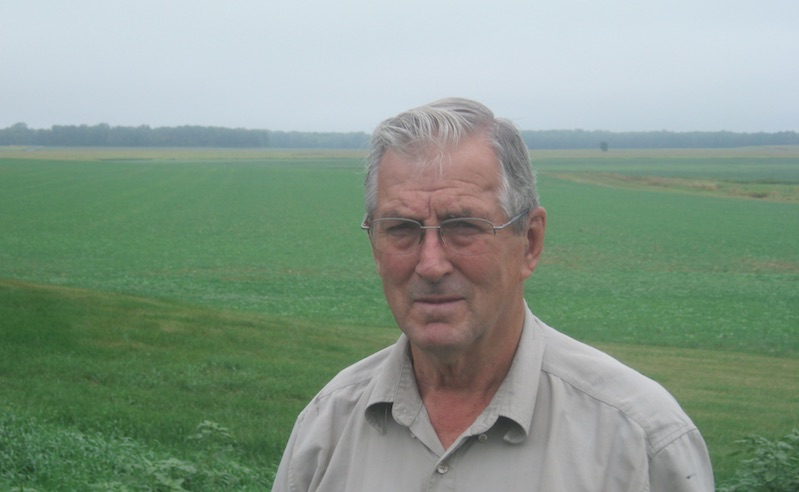