August 23, 2016 - Even when you do all the right things, there are no guarantees that everything will go as planned. That’s certainly been Tyler Vollmershausen’s experience in this tough cropping year.

The young Oxford County cash cropper and his family were named the Ontario Soil and Crop Improvement Association’s (OSCIA) 2016 Soil Champion at the organization’s annual meeting this past February. The recognition is handed out annually for excellence in soil management.

They won the award for their strip tillage practices, implementation of Greenseeker technology for variable rate nitrogen application, and innovative use of cover crops on their operation near Innerkip. But despite all good intentions, Mother Nature is still in charge - and when there’s no rain, plans can change quickly.

“We only had small amounts of rain in May and June - one tenth to two tenths of an inch at a time mostly - which stunted the growth of our early edible beans,” says Tyler, adding that a crop-saving rain of an inch and a half finally fell on about two thirds of their crops during the last week of July.

In ideal conditions, Greenseeker uses sensors to detect where additional nitrogen should be applied to corn, but the Vollmershausens’ corn was so stressed and wrapped from drought this year that they weren’t able to use the technology for a variable rate nitrogen application. Instead, they opted for a very conservative flat rate application.

The lack of rain has also brought other challenges this year. Their corn stands suffered from considerable insect pressure in early May, and western bean cutworm problems in their corn and edible beans are the strongest they’ve seen. In fact, provincial insect experts will be coming to the farm in August, according to Tyler, a delegate with the Ontario Bean Growers, for some work to help establish edible bean thresholds for cutworm to help growers better manage the pest in their crops.

Although cover crops did nothing to alleviate extreme drought stress for the Vollmershausens this year, their biggest benefit actually comes when there is rain as they help the soil absorb and retain moisture. And by coincidence, the large rainfall at the end of July helped illustrate that benefit and validate the Vollmershausens’ cover cropping and strip tilling approach to soil management.

“A piece of one of our fields was plowed this spring for a Union Gas project, essentially destroying everything we’ve been doing with strip tillage and cover crops in bringing up weeds and creating a pan in the soil that impacts drainage,” explains Tyler. After the heavy downpour, the water hadn't yet drained from the plowed ground after two days, whereas a field a couple hundred meters down the road that had been strip tilled and cover cropped was nicely drained – and shows less weed pressure too.

The Vollmershausens preferred cover crop continues to be cereal rye as it grows well and is excellent at choking out weeds; they’ve had less success with ryegrass and oats. “Rye works well for us and we’re comfortable with it; it’s not an expensive cover crop,” says Tyler, adding that they’re now experimenting with thinner stands and using fewer seeds so the crop is easier to burn off in the spring.

Although Tyler is very active on social media and had previously done a bit of speaking about his soil management approaches, the Soil Champion award garnered him more speaking invitations this past winter than he’d ever had before, including being part of Farm & Food Care’s Soil Health Road Show. Sharing knowledge is something he enjoys and says is important for continued progress with cover crops and tillage strategies.

“Others are doing interseeding now too and I’m looking forward to seeing other growers’ results this year,” he says. “It’s better for success when people share their results and use a collaborative approach.”

The Ontario Soil and Crop Improvement Association is accepting nominations for the 2017 Soil Champion Award until September 1, 2016. More details concerning eligibility and how to make a nomination are available here. 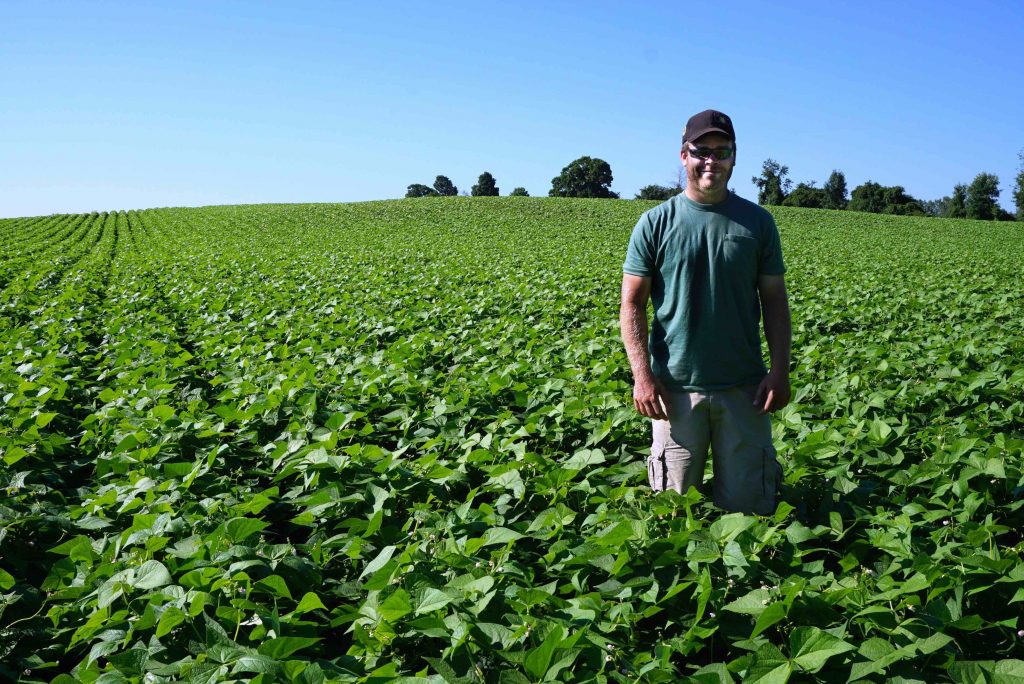