According to a new study out of Agriculture and Agri-Food Canada’s Lethbridge Research and Development Centre, most spring wheat could go in the ground earlier than traditional planting date recommendations would suggest. 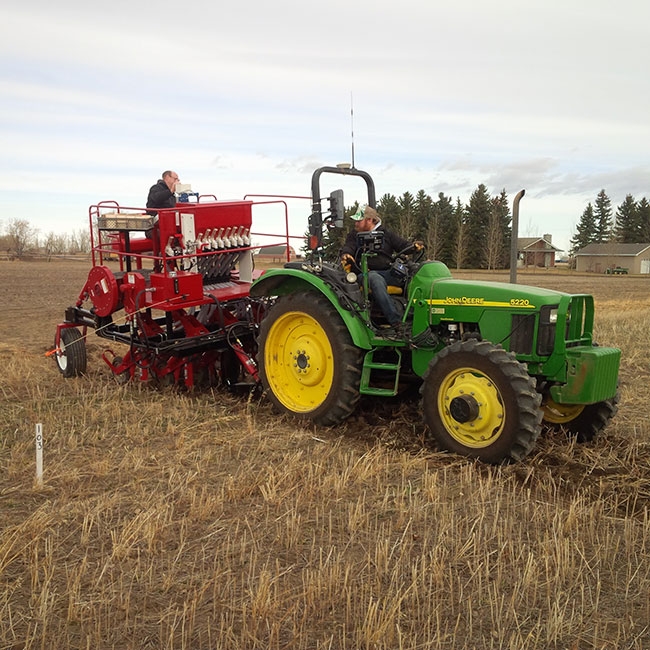 AAFC Lethbridge technicians Steven Simmill (on tractor) and Warren Taylow (on drill) planting the study’s first set of treatments in 2016. According to a new study out of Agriculture and Agri-Food Canada’s Lethbridge Research and Development Centre

It was inspired, says Beres, by a trip to Montana in late March. From the road, he could see producers prepping for seeding and even some seed drills already in motion.

“I thought, ‘This is what we should be doing – pushing our systems and asking when the soil is ready to take the seed on, rather than thinking about a date,’ ” he says.

Most producers are used to planting based on dates, says Beres, but researchers aren’t any better. “Most publications give prescriptive dates when summarizing a seeding date study. That gives you a snapshot of when the study was conducted, but you can’t predict from one year to the next what May 10 is going to be like,” he says.

Crop insurance providers also lean heavily on dates as a measure of whether or not fields should be insured.

“The old myth was that if you got in too early that seed would just sit there and rot,” says Beres.

Beres’ study, which was funded by Alberta Innovates, Alberta Wheat Commission and the Western Grains Research Foundation, set out to look at whether the team could couple alternative genetics – meaning wheat lines more tolerant to cold soils – with alternative planting practices, using soil temperature as the trigger for planting rather than a date.

What they found was that though most recommendations cite a soil temperature of 10 C to be optimal for seed growth, both the cold-tolerant wheat lines and regular CWRS spring wheats performed well when planted in soils as cold as 2 C in the top five centimetres of soil.

In fact, Beres’ team saw a yield drag when wheat was planted closer to so-called “optimal timings” of 6 C to 10 C.

Study setup and results
The study was set up at four sites over three years – Edmonton and Lethbridge, Alta., Swift Current, Sask., and Fort St. John, B.C. The conventional check variety used in the study was AC Stettler and Conquer VB in Lethbridge.

Preliminary results to the first part of Beres’ experiment indicate that seeding very early did not result in yield losses, but seeding between soil temperatures of two and six degrees resulted in the most stable yields.

The second part of Beres’ experiment, evaluating cold tolerant line response to agronomic management, compared seeding times based on soil temperature triggers – at 0 to 2.5 C, 5 C, 7.5 C and 10 C – as well as varying seeding rates (200 and 400 seeds per square metre) and depths (2.5 and five centimetres).

Preliminary results from the second experiment suggest that seeding early did not result in yield losses, and in fact sometimes resulted in a yield advantage. In addition, the higher seeding rate at earlier planting dates increased yield potential.

In both experiments, cold-tolerant lines did not outperform conventional lines.

Applications
Beres says early planting has many benefits. The most obvious is that producers can get on their fields earlier, which is a plus as farm sizes continue to increase.

But it also acknowledges the reality that the climate is changing. Farmers have received Beres’ research positively at grower meetings, and they say planting is possible earlier than it was generations ago. “You could find general agreement that the climate is changing and it’s changing in a way that’s going to force us to adapt our practices,” says Beres. “While this strategy won’t work every year in every location of the Prairies, it is a step in that direction.”

A second phase of the project is underway, funded by the Alberta Wheat Commission and led by PhD student Graham Collier under co-supervision by Beres and the University of Alberta’s Dean Spaner, that will look at other agronomic factors to the early planting system, including fall-applied residual herbicides for early season weed management, nitrogen sources and application timings, and the identification of conventional varieties suited to ultra-early planting.

Collier will identify genes that perform equally well or better at early seeding as conventional seeding dates, which could be used in future breeding programs.

Results from this second phase should be available in 2020.

But Beres says there’s no need to wait for a cold tolerance trait to apply his research. “The registered cultivars as represented by AC Stettler indicate that you can go ahead and plant early with minimal risk even with what’s available today,” he says.

Producers who choose to plant early should use a dual fungicide/insecticide seed treatment to help protect seed from abiotic stress.

“You need that package where you’re using soil temperature as a trigger point but your system includes a good seed lot packaged with a good fungicide/insecticide seed treatment and planted at optimum seeding rates,” Beres says.