What’s your worst weed? Pigweed? Canada fleabane? Field horsetail? Ontario farmers recently had the opportunity to vote on which weeds are the most troublesome. The results provide an intriguing glimpse into changing weed challenges in the province.

“Back in 2007, we decided to ask people what their worst weeds were, just to see what their concerns were. Then in 2016 we followed up with another survey,” says Dave Bilyea, a research associate in weed management at the University of Guelph’s Ridgetown campus. “Things are always evolving in agriculture, so we thought it would be interesting to see how things have changed given the almost 10-year span between the two surveys.”

Bilyea worked on the 2016 online survey with his Ridgetown colleagues Kristen McNaughton and Christy Shropshire. More than 300 people from 31 counties participated in the survey, which was publicized by various agricultural and government agencies.

Respondents were asked to identify and rank their five worst weeds from a given list. If their own worst weeds weren’t on that list, they could add their choices. They weren’t asked to give reasons for their choices. From all the votes, Bilyea determined the top 10 weed problems for Ontario-east, Ontario-west and Ontario-wide (see tables). Since more of the respondents were from the southwest than the east, the Ontario-wide results are tipped slightly toward weed concerns in the southwest.

Bilyea emphasizes that the survey results are just for people’s interest, providing a way to create conversations about weed issues. Although the collected data are not comprehensive enough to draw any definitive conclusions, it’s interesting to speculate on what lies behind the results.

In the 2016 survey, the Ontario-wide five worst weeds were, in order: lamb’s-quarters, Canada fleabane, common ragweed, eastern black nightshade and pigweeds. All five of these are broadleaf annual weeds with at least some herbicide-resistant populations.

Lamb’s-quarters Chenopodium album, which was in fourth place in the 2007 survey, is a very common weed that can grow up to 200 centimetres tall. “We can only surmise why people think certain weeds are the worst. In the case of lamb’s-quarters, it is probably one weed that touches all types of operations across Ontario whether they are horticulture or field crops, or even orchards and things like that,” Bilyea says. “It’s so pervasive; it’s everywhere.”

He thinks herbicide resistance might be an additional factor contributing to this weed’s top ranking, but it’s likely not the major reason. Ontario’s 2016 maps of herbicide-resistant weeds show lamb’s-quarters populations with resistance to Group 5 herbicides (e.g. Aatrex, Sencor) or Group 2 herbicides (e.g. Pursuit, Pinnacle) have been found in 36 counties. But Bilyea points out that just because some populations of a weed species in a county are resistant, that doesn’t mean all populations are.

In the top 10 list, lamb’s-quarters was followed very closely by Canada fleabane Conyza canadensis. Canada fleabane is a winter or summer annual and can be up to 180 cm tall.
“Canada fleabane is obviously a major problem now in Ontario, but in 2007 it wasn’t even on the list,” Bilyea says. “Canada fleabane is not a new weed; it has always been around. It’s a problem particularly for growers who have no-till because it likes undisturbed ground. And now we have a certain part of the population that is resistant to glyphosate [Group 9 herbicide].”
Glyphosate-resistant Canada fleabane populations have been spreading rapidly in the province. Glyphosate-resistant biotypes were first identified in Essex County in 2010. By 2012, they were found in eight counties, and now they’re in 30 counties. Some counties have populations with multiple resistance to both Group 9 and Group 2 herbicides.

Respondents indicated glyphosate-resistant populations were the issue for common ragweed Ambrosia artemisiifolia, the third-place weed in 2016, and giant ragweed Ambrosia trifida, in eighth place. “Not all giant ragweed is resistant and not all common ragweed is resistant, but there are significant numbers of fields with glyphosate resistance,” Bilyea says.

Fourth-place eastern black nightshade Solanum ptycanthum is another weed that can grow in many types of habitats. “Eastern black nightshade is especially an issue for growers who have beans. You can’t have nightshade in your bean crop for export for food-grade beans,” he notes. The juice from the nightshade berries can result in a discoloured coating on the beans, which is very difficult to clean off. “Also, after some of the early herbicide sprays have stopped doing their job, spots of nightshade will come up. I think the weed’s high ranking is also because nightshade goes right across the province, so it’s a very common, problematic weed for soybean and edible bean growers.”

The survey didn’t distinguish between different pigweed species (Amaranthus genus). Bilyea explains, “Green, redroot and smooth pigweeds are nearly impossible for most growers to tell apart. Also, for the most part, the control measures for them are similar.” These troublesome weeds can grow to between 150 and 200 cm tall. Redroot and green pigweeds are often in the same field. Many of the counties that have herbicide-resistant redroot pigweed also have herbicide-resistant green pigweed; resistances are to Groups 2, 5, 6 or 7.

Bilyea suspects better weed identification has influenced the changes in some weed rankings from 2007 to 2016. “People now have cell phones and they can look up online on their cell phones in the field and identify a weed or at least send a picture to somebody to have it identified.” He thinks misidentification of grass species might have contributed to the very high ranking of quackgrass in 2007, with some people identifying any grassy weed as quackgrass. “Quackgrass has completely disappeared off the [Ontario-wide] top 10 list in 2016, and some of the answers about the kinds of grasses that people have are a little more definitive, at least in the east.”

For people who would like to improve their weed identification skills, Bilyea maintains the Weed Identification Garden at the Ridgetown campus. “It’s a self-touring garden of common weeds, not just for rural people but for urbanites too. It has 208 pots set up in four rows, including lawn weeds, wild flowers, problem weeds, poisonous weeds, and a lot of weeds that people don’t even realize are in the area.” This year is the garden’s 40th anniversary. It is open to the public from May to October so people can examine the specimens and learn more about the weeds’ properties.

Some people may be disappointed that their own particular weed nemesis didn’t make it into the top 10. “Each grower has their own concern,” Bilyea says. “Just as an example, someone from the east was saying that they have a lot of bedstraw. Bedstraw is not a widespread problem, but for those growers in eastern Ontario who have the weed, it’s a huge problem. So that would be their number one problem, but there just aren’t enough of them across the region to put bedstraw into the top 10.” 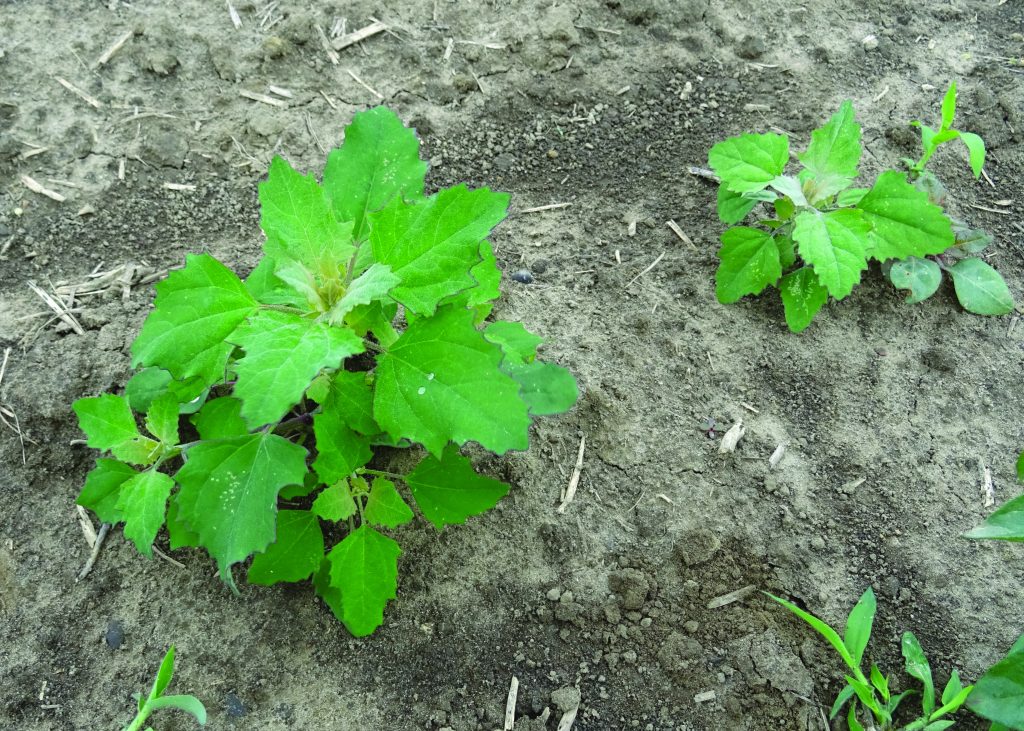