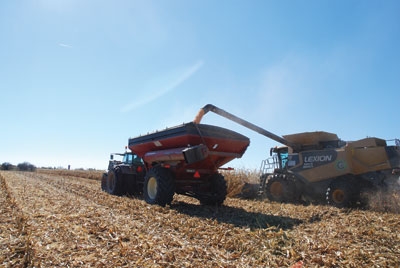 The 2010 corn crop was one of the earliest-planted It is time to put an “ear” to the ground.

It is time to put an “ear” to the ground. With the exceptional corn harvest of the last several years, especially 2010, soil tests this coming spring are a must for growers to accurately gauge the level of nutrients that should be applied going forward. “Ontario growers have just come off of one of the earliest-planted, highest-yielding, driest-harvested, and highest-paying corn crops ever recorded in the history of the province,” says Pioneer Hi-Bred agronomist Morris Sagriff, based in Tupperville, Ontario. “It’s time to reinvest.”

High yields were, in large part, due to growers being able to plant three-quarters of the crop in very dry soils during the month of April. “Early planting helps develop a greater soil root mass,” says Sagriff. “Later, when the crop reaches critical stages of growth, a large root mass enables the plants to continue growing by drawing on deep soil water reserves when demand is highest.”

The 2010 season was also one of the warmest on record, with more 30-degree C days than in any year in the last 75 years. “Early April plantings allowed most areas to receive 200 to 300 corn heat units (CHUs) more than what they would normally receive,” says Sagriff.

Growers have also been taking advantage of the stress tolerance bred into today’s hybrids by increasing their seeding rates. Although using a higher population increases inter-plant competition and may lower individual plant yield, it increases yield per unit area by optimizing yield components, including ears per acre, kernels per ear and weight per kernel. “In 2010, it’s believed that farmers in Ontario will have approached an overall seed drop of nearly 32,000 seeds per acre,” says Sagriff.

However, Pioneer Hi-Bred research shows that increasing seed drops from 32,000 to 36,000 seeds per acre with population-responsive hybrids has increased yields by as much as eight to 10 bushels per acre. “Many on-farm population trials this past year (2010) showed as much as a 12-bushel-per-acre response from increasing seed drops this much,” Sagriff observes. “All of this of course requires good, well-drained, friable land that has a long-term average yield capability of more than 150 bushels per acre.”

Looking ahead to 2011
At the same time that 2010 resulted in spectacular yields, large amounts of nutrients were removed from the soil, and growers must ensure they are replaced to achieve high yields going forward in 2011. “In general, every bushel of corn harvested from an acre of land will remove nearly 0.4 pounds of phosphorus and 0.3 pounds of potash,” notes Sagriff. “That means when a 200-bushel-per-acre corn crop is harvested, you have removed from that acre nearly 80 pounds of phosphorus and 60 pounds of potash. That amount of plant nutrient needs to be replaced in order for soil test values to be maintained.”

He adds that because fertilizer usage is expected to increase and fertilizer prices are expected to continue to rise, “applying replacement nutrients now rather than later may be your most prudent plan.”

Every field needs to be judged on its own merits, and experts strongly recommend testing soil of all fields at least once every third year. However, Greg Stewart, corn industry program lead with the Ontario Ministry of Agriculture, Food and Rural Affairs (OMAFRA) offers a word of caution about acting on soil test results. “In terms of P and K, too many farmers look at the results and use a one-size-fits-all solution,” he says. “Growers should instead be thinking more strategically.”

For example, it is wise to block fields into groups based on which ones demonstrate low soil K test results. “If you don’t do this, and decide to run an N and P ‘starter’ strategy on your whole farm and you have fields low in K, your yields in those fields will suffer,” Stewart observes. “Our research numbers have been quite shocking in demonstrating how much yield growers can give up if fields are potassium deficient.”

Growers should also examine soil test results in the context of soil pH. “This generally means you have to deal with spots that have gone acidic,” says Stewart. “Acidic soils can reduce the availability of major nutrients as well as micronutrients. This is one area where site-specific management, again, works very well.”

For N recommendations, Sagriff and Stewart advise starting with the Corn N Calculator at www.gocorn.net; the website also provides the Ontario Corn Committee’s yearly hybrid trial data. “Long-term N studies have shown that growers may not need to apply one pound of N per bushel of expected yield,” explains Sagriff. “Most growers using the calculator for the first time are somewhat surprised by the suggested application rates recommended.”

The software accounts for soil type, corn heat units, long-term average yield or expected yield, previous crop, futures contract price and the cost of N. It provides suggestions for pre-plant N and side-dress N application rates. “These factors are always in flux a little bit, but the calculator gives you a feel for your land and can moderate leaps of judgment,” says Stewart.

Sidedress applications, when possible, are also important to ensure N is provided adequately close to the time of maximum corn N uptake. “It’s important that N is not limiting at any time during the growing season,” says Sagriff. “N uptake by the corn plant peaks during the rapid growth phase of vegetative development, between V12 and VT (tasselling). But N requirement becomes high beginning at V6 and extending to the R5 (early dent) stage of grain development.”

Sagriff has another piece of advice. “If the opportunity presents itself again in the spring of 2011 to plant in mid- to late April, you should definitely do so,” he says. “If that is the case, consider growing a certain percentage of your acres to fuller-season hybrids. Studies show clearly that fuller-season hybrids can outperform adapted earlier-season hybrids by a solid economic margin, particularly when you plant early.”