Pulse crops provide important rotational benefits in Prairie cropping systems, including yield benefits to subsequent crops. Cereal crops grown on pulse crop residue typically have higher yields, and often improved protein. The improvements can be partially attributed to the supply of nitrogen (N) from decomposing pulse crop residues. However, researchers continue to try to determine the contribution from all parts of the system, including belowground residue (BGR).

In a recent field study led by Dr. Yantai Gan at Agriculture and Agri-Food Canada (AAFC) in Swift Current, Sask., wheat, canola and several pulses were grown in lysimeters and measures of rootmass N, carbon and biomass were calculated. “We took measures several times during the season, which gave us a snapshot of how rootmass N and carbon change through the season relative to aboveground N,” explains Dr. Reynald Lemke, research scientist with AAFC in Saskatoon, Sask. “However, we were unable to accurately measure the more transient rhizodeposits or ‘root-derived N’ released into the soil by plant roots during the growing period.”

Lemke and colleagues from AAFC and the University of Saskatchewan initiated a greenhouse study in 2011 to build on the results from this and other field studies. The objective of the greenhouse project was to quantify the belowground N (BGN) input from lentil and wheat using shoot N-labeling and to trace the N from BGN of lentil and wheat into subsequently grown wheat plants. The potential yield benefit of growing wheat on lentil relative to wheat BGN was also evaluated.

“We were trying to fill in gaps from field studies looking at the N balance and carbon change over the long term, to try and get at the specifics of the end credit from pulses in rotations,” explains Lemke. “We conducted this greenhouse study under more controlled conditions using a stem-wick approach and shoot 15N-labeling [a stable isostope] to trace the N from BGN into subsequently grown wheat plants. Our main goal was to determine the total BGN contribution including the more transient root-derived N components. The BGN levels are considerably more significant than the N in the standing rootmass, but being belowground is very difficult to measure.”

The use of the N-labeling allows researchers to track the N movements in the plant and into the soil. “One of the great benefits of pulse crops is that in association with root rhizobia, they fix much of their own N requirements. However, we also know that not all of the N in the pulse crop has been fixed from the atmosphere; plants will also scavenge N from the soil and residual fertilizer. Therefore, we wanted to try to figure out how much of the N in the crop is from both above and belowground contributions, how much is fixed from the atmosphere, and then calculate the net benefit.”

In the first phase of the study, wheat and lentil were grown in pots in the greenhouse. Once the plants matured, the aboveground biomass was harvested and BGN levels measured. The BGN portion of total plant N was 34 per cent for lentil and 51 per cent for wheat. Although wheat produced more root biomass than lentil, the total amounts of BGN did not differ between species in the first phase.

In the second phase, wheat plants were grown in pots containing the undisturbed N-labeled roots and rhizodeposits of both wheat and lentil in order to quantify the supply of BGN to wheat. The aboveground residues from the previous lentil and wheat crop were removed to more accurately measure N from BGN.

“For wheat grown on lentil BGN, total wheat yield was 49 per cent higher and N uptake was 14 per cent higher than for wheat grown on wheat BGN,” says Lemke. “The yield benefit of wheat following lentil could not be explained completely by just the N benefits; there is something else going in by including lentil in rotation as compared to continuous wheat. Further research is needed to help determine what the specific non-N factors are.”

The research study confirmed that BGN is a very important component, and lentil, because it fixes much of its own N, provides a larger N credit than had been estimated. Researchers also calculated the distribution of N in the aboveground plant parts and calculated the N harvest index.

“Our work confirmed speculation that the BGN contribution was considerably higher than the N from standing rootmass,” says Lemke. “The results are also consistent with what we have been observing in long-term studies. Growers who include a lentil crop or other pulses in their crop rotation sequence on a regular basis can expect to get an ongoing N benefit.”

A new study was launched in 2014 to take this greenhouse project to the field. “The study is planned over three years using N-labeling for both N and carbon to try and determine the N, carbon and greenhouse gas contributions from various pulse crops in rotation under a field situation,” says Lemke. “We will be conducting side-by-side comparisons of lentil, field pea, chickpea and fababean in rotation with wheat. Our goal is to be able to provide a better picture of the overall N balance in the cropping system, including above and belowground N, and a refined estimate of N fixation.” The project is pending final funding for the next two years. 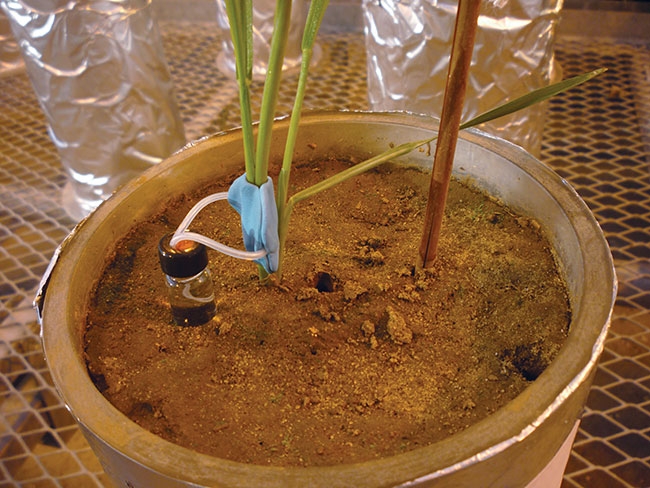