In recent years, canola growers in southern areas of Alberta often had both cabbage seedpod weevil (CSPW) and lygus bugs in their fields. Indeed, these insects have become a chronic problem for canola growers, particularly in areas south of Highway 1 in Alberta and southwest Saskatchewan. Growers and researchers wanted to know if the management of one insect pest had any impact on the other.

“We started a four-year study in 2010 to determine the impact of spraying insecticide for cabbage seedpod weevil at early flower on the abundance of lygus bugs at early pod stage in commercial farms,” explains Héctor Cárcamo, research scientist with Agriculture and Agri-Food Canada (AAFC) in Lethbridge, Alta. “We also wanted to determine the impact of weather-related and other factors on canola yield.” Cárcamo collaborated with other researchers at AAFC and Alberta Agriculture and Rural Development on the project.

Although several years of small research plot data was available, Cárcamo wanted to collect information from commercial fields to compare the results with small plot research. “We wanted to validate earlier results from small plots and cages in commercial fields under typical grower management,” explains Cárcamo. “The dynamics of insects are different at the farm scale and there is a large amount of variability in farm fields. Having a four-year study at the farm scale, particularly for insect research, is important to help account for that variability.”

Over the four-year project, researchers studied a total of 78 canola fields in southern Alberta, sampling insect data at specific GPS locations in several quadrants in both sprayed and unsprayed check areas. They also recorded combine yield data using GPS linked files from growers where available (about 25 per cent) for comparison. “We also collected yield samples in each field using quarter meter square quadrants; however, the yield data from the combine was the most reliable,” says Cárcamo. “In some fields, rain gauges were installed to monitor rainfall, which is something we would like to pursue more in the future.”

The results of the research indicate that if CSPW are a problem and are sprayed at the early flower stage, then the numbers of lygus at the pod stage will be lower. However, the results also show that decision-making is much more complicated than that and other factors need to be considered. “The interesting lesson we learned from this research is that yes, the majority of canola fields that needed to be sprayed early for CSPW were seeded early. However, not every field seeded early accumulated CSPW,” notes Cárcamo. “There was a lot of variability, and it is very important for growers to monitor their fields and make decisions on what they find in their field, not on neighbouring fields. CSPW can be patchy in fields, and just because a neighbour is spraying doesn’t mean you have to.”

Another lesson learned from the research is that the effect of seeding date has opposite effects on CSPW and lygus. “If a field is planted early, then there is a higher risk of accumulating CSPW. However, these early-planted fields tend to have low numbers of lygus,” explains Cárcamo. “This means the spraying decision should only be made on the CSPW thresholds, as the lygus numbers are not going to be very important in that field anyway.”

In the fields where rain gauges were installed, the results showed there was a trend towards fewer lygus numbers when there was more rainfall. “We want to expand the research to include more fields to look at the relationship between rainfall and lygus numbers,” explains Cárcamo. “The few fields we had showed that if there was about an inch of rainfall in a short period, the crop is at the early pod stage and lygus are small, they may be dislodged and are either eaten by other predators or unable to find their way back to the crop. Therefore, after a heavy rain, growers should go back and do another sweep before making decisions on whether or not to spray.”

It is also important to note that in southern Alberta, there are usually two and possibly up to three generations of lygus in a season. However, in more central and northern areas there is only one generation. Having two generations in the south makes it bit more challenging, so there can be migration of lygus into the fields to some extent. Lygus numbers can typically get very high at the end of the pod stage, but usually the crop is advanced enough to withstand the infestation.

“We have also done some preliminary research to evaluate the threshold at the end of flowering,” says Cárcamo. “We worked with a few growers near Claresholm in 2012 and 2013 to monitor fields, and left check strips to measure potential damage by lygus at 10 to 14 days prior to swathing. We used a nominal threshold of five lygus per sweep at the early pod stage when the crop is at the end of flowering or about 90 per cent complete.”

The preliminary results from these few fields showed that lygus can reduce yield by about 2 bu/ac at that time. However, spraying with ground equipment will also reduce yields by at least one-half bu/ac. So taking the cost of application into account and the pre-harvest interval, it may be better to leave the insects at that stage if the numbers are not too high.

“Our research results from this four-year study do show that if a spray application is made early for CSPW, then the number of lygus at the pod stage can be reduced on most farms,” notes Cárcamo. “However, the results also show that if numbers of CSPW have not reached threshold levels at early flower, there is no yield benefit from spraying for potential other future pest.

“There is no quick fix, you can’t just plan to go in at early flower and spray whether or not there are CSPW and control insects for the rest of the season,” he adds. “There is always the risk of lygus migration or other insect pests such as diamondback moth and others later in the growing season, so spraying for CSPW should only be done if required to control CSPW. Using insecticides only when necessary reduces input costs, reduces the risk of resistance, and helps to protect the environment and beneficial insects.” 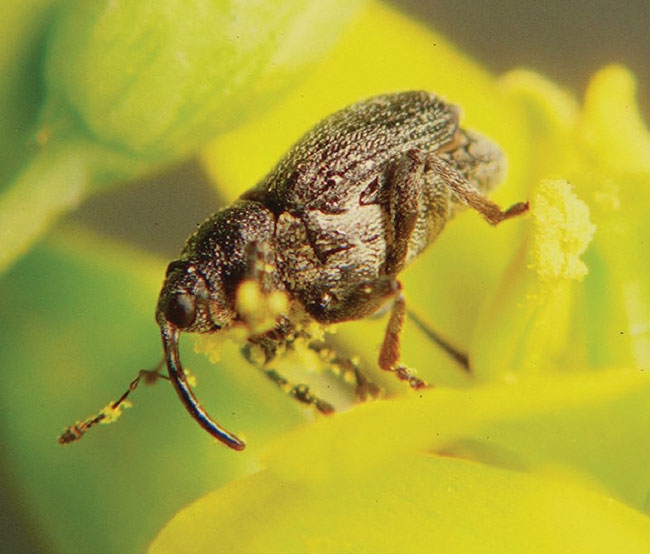