Times change and so do cropping practices, but century-old cropping system experiments continue to give back, thanks to the foresight of researchers who established and maintained the plots for more than 100 years. A recent analysis of nitrogen (N) inputs and removals found a surprising result in a long-term study in Lethbridge, Alta. Nitrogen removal in three different wheat rotations could not be solely attributed to N fertilizer or mineralization. 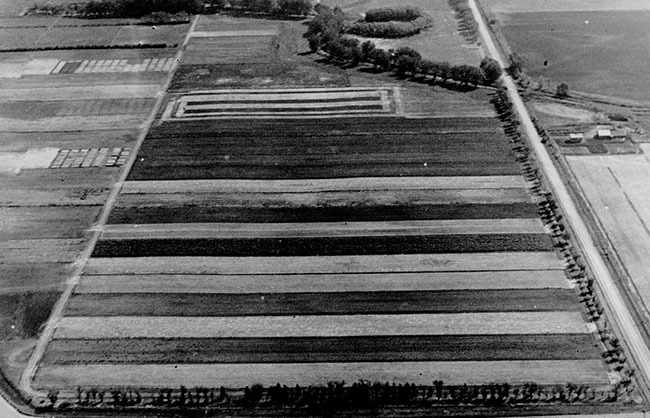 “Calculating N budgets offers invaluable clues about whether systems are losing or gaining N, the possible routes of any losses, and the practices that might best improve efficiency,” says Rezvan Karimi, an Agriculture and Agri-Food Canada (AAFC) researcher in Lethbridge.

No fertilizer was applied to any of the plots until 1967, when an N fertilizer treatment (45 kilograms of N per hectare as ammonium nitrate) was first applied to a strip running the length of each plot. Beginning in 1972, a phosphorus (P) fertilizer treatment (20 kilograms of P per hectare as triple super phosphate, 0-45-0) was similarly applied in strips to each plot. Phosphate was applied with the seed in the seedrow and ammonium nitrate was broadcast.

Karimi’s research objective was to assess the long-term effect of management practices on soil N content, grain yield, and N budget. Karimi says the study is unique in that it allowed them to estimate N losses or gains during a century of agricultural production, spanning virtually the entire time from initial cultivation of the soil to the present day.

Moldboard plow and disc implements were used in the early years, and replaced by the wide blade cultivator in 1939 when stubble mulch practices were adopted, says Karimi. In recent decades, tillage has been progressively reduced but has been used in some years for seedbed preparation and herbicide incorporation. All straw above the cutting height was removed from the plots during stoking of sheaves until 1943 when combine harvesters were first used.

In 2015, the total N and organic C concentrations of archived samples was analyzed, spanning a complete century from 1910 to 2011, to ensure consistency of analytical techniques. These analyses allowed the researchers to look at changes in N fertility and organic matter over the past 100 years.

Long-term yield trend and N removal
Rotation grain yields, without added fertilizer, were virtually identical among systems from 1911 to 2014. Plot yields after fallow were almost two times greater than after wheat, largely because moisture and soil nitrate accumulated during the fallow year, so that the yield response to fallow offset the loss of yield during the fallow year. This resulted in rotation yields (average of cropped and fallow phases) that were minimally affected by fallowing.

Despite appreciable year-to-year variability, grain yield in unfertilized subplots showed a general increasing trend over the first eight decades of the experiment, likely because of improvements in weed control, crop varieties, and other cultural advances. In the last 20 years, yields have generally declined, partly because of problems with weed control and unusual precipitation patterns in selected years. However the evidence also points to growing N deficiency in these unfertilized plots because of a decline in organic matter and lack of N mineralization, Karimi says.

Conversely, yield response to N increased over time, especially under continuous cropping and when P fertilizer was also applied.

N balance
The N balance was calculated for two time periods: 1911-1966 and 1967-2014, corresponding to the time before and after inception of N fertilizer treatments and roughly 50-year segments. Changes in soil N were calculated for the surface 0 to 15 centimetres, the layer of soil most prominently affected by cropping.

For the first half-century (1911-1967), N removal was approximately equivalent to the loss of soil N in the surface 15 centimetres; the net removals were almost exactly balanced by losses of soil organic N. In effect, an amount of N roughly equivalent to mineralized N was absorbed and removed by the growing crops.

The N balance for the post-1967 time period, however, tells a somewhat different story, Karimi says. By this time, the soil organic matter had more or less reached a steady state, so there was now no appreciable net contribution from mineralization of organic N. During this second time period, removals of N in grain exceeded N fertilizer inputs by approximately 20 to 30 kilograms of N per hectare per year. The origins of this unaccountable N remain uncertain, but are likely from outside sources, perhaps partly from atmospheric ammonia (NH3), Karimi says.

Karimi says the outside source relevant to this study may be the intensive livestock operations that were located upwind of this experiment. Measurements of NH3 deposition in southern Alberta, prompted in part by the N imbalance in these long-term plots, show large fluxes of NH3 emitted from beef feedlots, and significant deposition of this NH3 downwind of these sources.

“Most likely, the apparent non-fertilizer N input into these long-term systems reflect multiple sources, including precipitation and dry deposition. Regardless of their origin, our study indicates that the N balance of a cropping system cannot be considered in isolation of N dynamics in surrounding ecosystems,” Karimi says.

Karimi also noted that over the last half century, cumulative recoveries of N fertilizer in harvested grain ranged from 11 per cent for fallow-wheat to 40 per cent for continuous wheat without P fertilizer and 58 per cent in continuous wheat with P fertilizer. She says the other 40 per cent of N unaccounted for does not appear to be accumulating in soil organic pools in the top 15 cm, based on their soil analysis. Karimi says 60 per cent recovery is typical of other Canadian studies with near-optimal nutrient amendment rates.

“This study demonstrated the importance of long-term experiments, despite some shortcomings, in evaluating the N balance of cropping systems, and indicated the potential significance of non-fertilizer N inputs from outside sources in such ecosystems,” Karimi says.