The fungal disease Verticillium longisporum was first detected in Canada in a canola field on a farm in Manitoba in 2014. The results of a subsequent national survey led by the Canadian Food Inspection Agency (CFIA) and released in 2016, detected the presence of the pathogen V. longisporum in varying levels in six provinces in Canada: British Columbia, Alberta, Saskatchewan, Manitoba, Ontario, and Quebec. 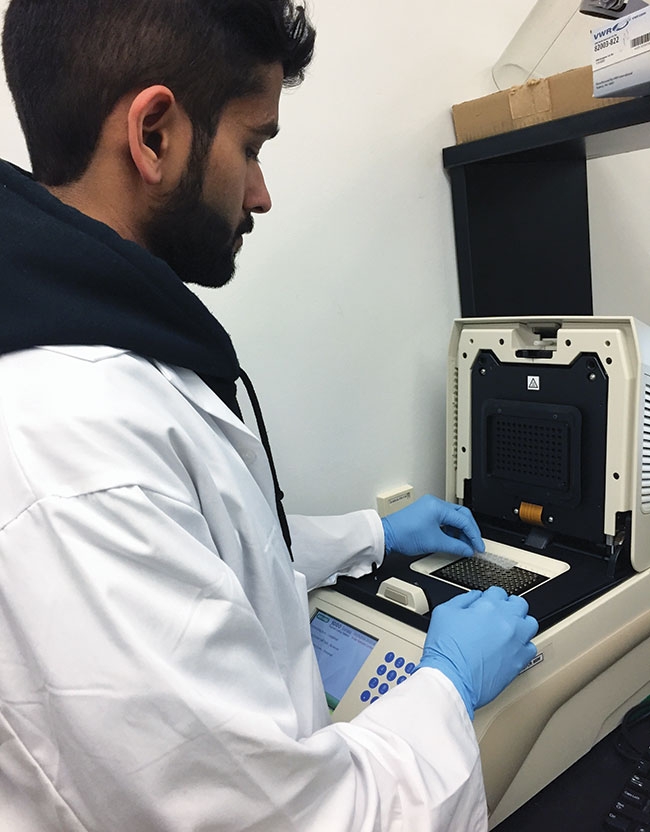 Graduate student Abhishek Agarwal loading a real-time PCR machine for analysis of the pathogen levels in soil. The fungal disease Verticillium longisporum was first detected in Canada in a canola field on a farm in Manitoba in 2014.

To date, the pathogen doesn’t appear to be causing serious production or yield concerns, however, researchers and the industry are monitoring and learning as much as they can about this pathogen.

Researchers at the soil ecology lab at the University of Manitoba took an in-depth look at the pathogen at the location of the first report in Canada (and in North America) to learn more about the pathogen and its distribution. Led by Mario Tenuta, professor of applied soil ecology with graduate student Abhishek Agarwal, the project has provided some interesting preliminary results.

“The objectives of this project were to determine the dispersal and distribution of the pathogen on the farm where the disease was first discovered on canola,” Tenuta explains. “We also wanted to determine the V. longisporum lineage to better understand the pathogenicity and disease causing ability of this disease in canola in Canada. This soilborne fungal pathogen causes the disease Verticillium stripe in rapeseed in Europe, and could potentially be quite virulent on canola.”

A series of Google Earth images of the farm from 2002 to 2014 were used to identify areas of the farm that were cropped differently in any given year. Sub-fields with a unique cropping history were identified and soil samples taken from each area.

“The farm has a history of supporting a number of variety trials and other projects, so we wanted to understand how the pathogen arrived on the farm and whether it was dispersed across the farm or not,” Tenuta says. “The farm was divided into 58 unique fields for soil sampling, with a total of 191 samples analyzed. The analysis was completed using a method we had developed in our lab for quantifying V. longisporum in the plant, and in the soil based on DNA using a real PCR method. We are in the process of publishing the method to be available for any lab to use.”

The results showed that out of the 191 samples examined, 128 samples, or about two-thirds, were considered positive for the pathogen. Although generally the pathogen levels were low in most locations, a few locations had very high concentrations, including the first location it had been detected. “This information tells us that the fungus moves around and is easily dispersed in the soil, which falls in line with the CFIA survey that discovered the fungus distributed across much of the canola growing areas in Canada,” Tenuta says. “We also compared the cropping history of the various fields, but we were unable to find any kind of relationship between cropping history and the level of pathogen in the soil. For example, one site had not had canola since 2003, but still tested positive for the pathogen.”

A second part of the project focused on the genetics of the fungus isolate from the farm to try and identify where it originated. V. longisporum is a hybrid fungus, with three possible hybrids identified so far globally. Tenuta explains that V. longisporum is a diploid hybrid of either of two species of V. dahlia (parental lines D2 or D3) and also either of two other unknown species (A1 or D1). The known lineages globally are A1/D1, A1/D2 and A1/D3, with A1/D1 known to be the most virulent on canola and the one that has been found in the European Union to be most pathogenic of rapeseed. The analysis confirms that the pathogen at the Manitoba farm is A1/D1, which warrants further examination of the pathogenicity and disease causing ability of this pathogen.

Tenuta adds that so far, there doesn’t appear to be any yield decline or loss at the farm where the pathogen was discovered. “After the discovery, the farm was under quarantine for two cropping seasons and has since developed a strict biosecurity program that controls the movement of visitors, vehicles and equipment on the farm. Visitors can only park at one place, and only designated farm vehicles are allowed to travel between fields. Similar to clubroot disease management, minimizing soil movement, sanitizing and cleaning equipment before it is moved and other practices to prevent the further spread of the V. longisporum pathogen are being followed.”

The project is nearing completion, with the analysis and final results available in the next few months. Overall, the results suggest that V. longisporum can be expected to easily disperse within and between canola fields and studies to determine yield impacts should be done. The study also confirmed that the hybrid present for this first reported farm of Verticillium stripe of canola in North America is that which is most aggressive on the crop, A1/D1.

“With the potential pathogenicity of this pathogen, conducting a more thorough examination of this pathogen in the different growing areas and verifying whether or not it is a potentially damaging disease is important,” Tenuta says. “Studies could be conducted to see if the levels of the pathogen can be built up in soil, and if under high levels can develop disease and yield loss. If yield loss does occur, then an assessment of the current genetic material of canola, and whether or not there are differences in disease resistance would be important. Therefore, if a problem does development, we may have canola lines in place that could help reduce any potential losses. We now have better knowledge and ability to understand this pathogen, and will work with industry on any next steps.”