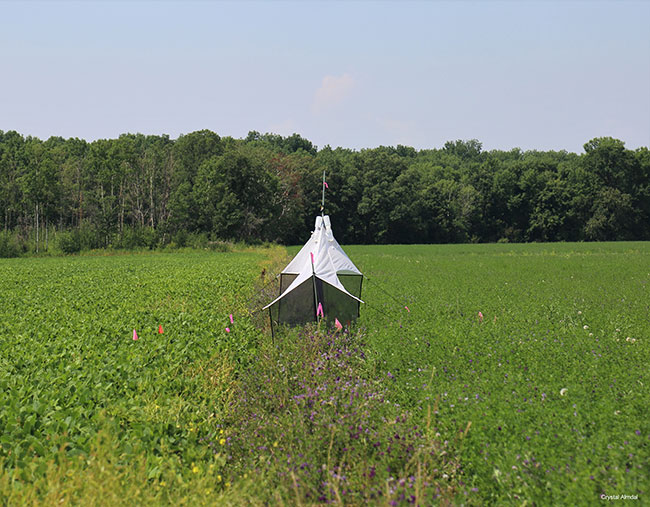 Bi-directional Malaise traps were set up on field edges to monitor the movement of natural enemies from the adjacent habitat. Photos courtesy of Crystal Almdal.

Call in the reinforcements. When soybean aphids arrive in late July on southern winds from the U.S., natural enemies can help to keep their populations under control, especially if the habitat surrounding the soybean field is diversified. That’s according to research at the University of Manitoba.

“My study shows that diversifying crops at the landscape scale can reduce the colonization of aphids in soybeans and lead to better aphid control. This is especially important since we don’t believe soybean aphids overwinter in Manitoba, and believe they immigrate during the summer months from the United States,” explains Crystal Almdal, a MSc student in the Department of Entomology at the University of Manitoba.

Working under the supervision of associate professor Alejandro Costamagna, Almdal conducted research in 2017 and 2018 looking at how fields and habitat adjacent to soybean fields impacted soybean aphid and natural predator movement into infested fields.

In each year, bi-directional Malaise traps were set up on field edges to monitor the movement of natural enemies from the adjacent habitat. The soybean fields were adjacent to alfalfa, canola, spring wheat or woody habitat. Sweep net and plant counts were also conducted to monitor predator and aphid populations in the soybean fields. Additionally, sticky traps were placed in the soybean and adjacent habitat to measure predator abundance in 2017.

In 2017, aphid populations overwhelmed the predators on 11 of 12 fields, while the twelfth field had low levels of aphid populations.  The populations of natural enemies grew alongside the aphid population, including hover flies (syrphids), lady beetle larvae and adults (coccinellids), minute pirate bugs, damsel bugs, and green and brown lacewings. In response to the aphid outbreak, hoverflies, the most predominant predator, increased six-times in population levels, and lady beetles increased four-times.

In 2018, the natural predators were able to keep the low soybean aphid levels below the economic threshold.

Predator movement into a soybean field was driven by the presence of soybean aphids. Hover fly abundance was 33 times higher in outbreak years than low aphid years, and lady beetle abundance was 15 times higher. 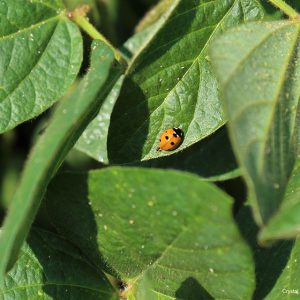 Adult seven-spotted lady beetles can eat up to 115 aphids per day. 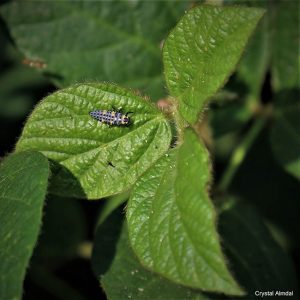 The larvae of the seven-spotted lady beetle can consume up to 105 aphids per day.

Adjacent habitat makes a difference
Almdal found that habitat adjacent to soybean fields affected both predator and soybean aphid movement. She says that annual crops (wheat and canola) tended to have and provide more hoverflies than perennial habitats (alfalfa and woody vegetation), which was most likely because annual crops had more resources at the time of the study (mid-July to early August). Lady beetles were moving into soybean from all surrounding habitats.

Crop diversity at a radius of 1.5 kilometres resulted in greater aphid suppression during outbreak years, and also showed a trend of increasing predator immigration.

“We found that when there are more edges in the landscape, we see better aphid control during a low aphid year. Therefore, having more crops or habitats in a given area is good for aphid control, and is likely because it makes it easier for natural enemies to access resources,” Almdal says.

Generally, these natural enemies moved among all habitats, including soybean, wheat, canola, alfalfa and wooded areas. These habitats provide a refuge for the predators, where they can move into soybeans when aphids are present.

“Understanding how the surrounding environment impacts pest control services by natural enemies is important so that we can develop more sustainable practices to control soybean aphids and reduce our dependency on chemical inputs in agriculture that are costly to producers and have non-target impacts on other living organisms in the system,” Almdal says.

Agronomists and farmers are also encouraged to help maintain beneficial insects in crops. Almdal points to practices such as the use of economic thresholds when available, selective insecticides that target the specific pest and don’t harm beneficials, planting insect-resistant crops, rotating crops, and adopting minimum or zero till practises.

For soybean aphids, the action threshold where an insecticide application is recommended is 250 aphids per plant on average, with an increasing population at R1 (beginning of bloom) to R5 (beginning of seed) growth stages. Also consider using the Aphid Advisor app, that uses a dynamic action threshold based on aphid and natural enemy counts, soybean growth stage and air temperature.

Almdal says agronomists and farmers should also consider planting crops near each other that provide natural enemies with food and shelter resources at different times in the growing season to prevent resource bottlenecks.

“This would help natural enemies build up their populations early in the season, and promote movement between crops throughout the season. It would resemble planting flowering plants/crops (for example, canola and alfalfa) and plants/crops that harbour aphids earlier in the season (like wheat and alfalfa) before aphid establishment in soybeans, which would benefit natural enemy movement into soybeans. Additionally, this will benefit soybean aphid control by increasing crop diversity and decreasing aphid colonization in soybeans during outbreak years.”