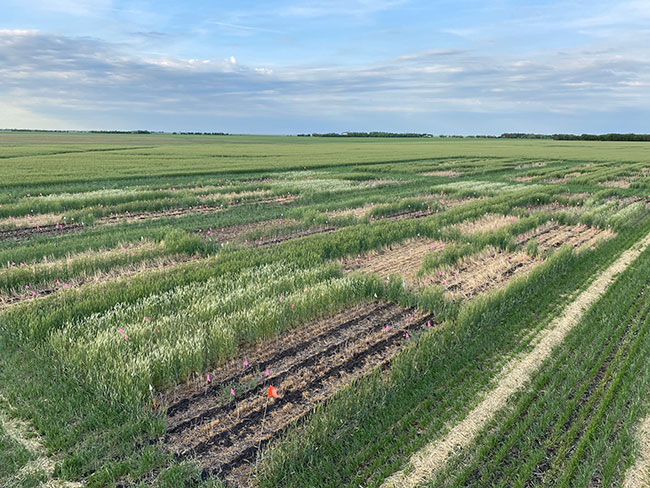 Termination timing of a rye cover crop was fairly wide for soybean and dry bean. PhotoS courtesy of Virginia Janzen.

As a cover crop, fall rye seeded after harvest has the advantages of providing good fall and spring regrowth to help reduce soil erosion and to suppress weeds. But questions remain around when is the best time to terminate a fall rye cover crop in the spring. The common recommendation was 14 days before seeding, but that recommendation comes from the U.S. mid-west where cover crop growth can be much heavier than on the Prairies.

“Part of the reason for the 14 day recommendation was because of concern over allelopathic injury to the following crop from fall rye. I get questions about that all the time, but I’ve never seen a problem,” says Yvonne Lawley with the department of plant science at the University of Manitoba.

To develop made-in-Manitoba recommendations for termination timing for fall rye in soybean and dry beans, Lawley and MSc student Virginia Janzen conducted research at Carman and Kelburn in 2019 and Carman and Morris in 2020. Four termination timings were compared at 14 days prior to seeding soybean or dry bean, four days before seeding, one day after seeding, and 14 days after seeding, along with a no cover crop control. 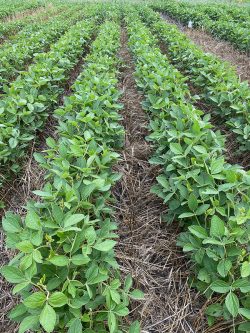 Soybean yield was similar for termination timings from 14 days before to even 14 days after seeding.

“We didn’t have a good herbicide option for in-crop termination in dry bean 14 days after seeding. We definitely saw with dry beans that the late termination was a train wreck,” Janzen says.

“We talk about this every week. How much biomass is enough?” Lawley says. “We can’t grow the same amount of biomass as in the U.S. Based on research from Western Canada, a general rule of thumb is 1000 kg/ha is sufficient cover crop biomass to prevent soil erosion, but we don’t know the optimal amount of biomass we need to grow to reach the range of cover crop goals we have for the Prairies.” 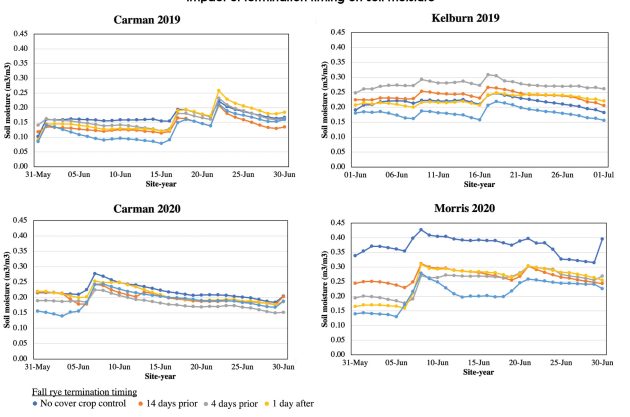 “I was surprised that there were few differences in soil moisture, but these were dry years with limited rye cover crop growth, so maybe that was the reason,” Janzen says.

Lawley was also expecting differences in soil moisture with later growth taking up more soil moisture. “That is the concern. That fall rye will use up all the water. But it is complicated. We don’t know the impact of the cover crop on soil porosity and water infiltration, or evapotranspiration. It’s something that we need to look into further.”

On the other hand, in wetter years, the extra biomass from fall rye might be desirable for using up excess moisture. 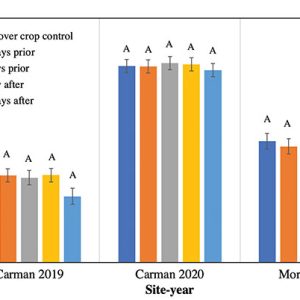 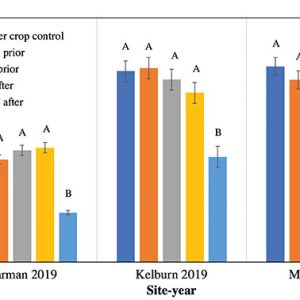 Little difference in soybean yield
At the three sites where yield was measured – Carman 2019 and 2020, and Morris 2020 – soybean yield was statistically similar between all termination timings and the control. Kelburn 2019 yield was lost due to deer damage.

“It surprised me that yield was so similar between termination timings. That gives lots of flexibility for terminating rye depending on the goals for the cover crop, but also flexibility for weather issues,” Lawley says.

Lawley cautions that these results are specific to soybean and dry bean. Cereal crops are a different story. A cover crop left to grow later into the spring will result in lower wheat yield. This is because the cover crop takes up nitrogen (N) that isn’t mineralized back into the soil in time for the wheat crop to use. Conversely, N-fixing crops like soybean have been found to fix a greater percent of their N requirement if soil N levels are low.

“My take on the research is that there is more flexibility in termination timing than we thought. You can be more confident that soybean and edible bean yields won’t be negatively impacted if termination is closer to planting,” Lawley says. “I think the results show that a fall rye cover crop is something to try right now.” 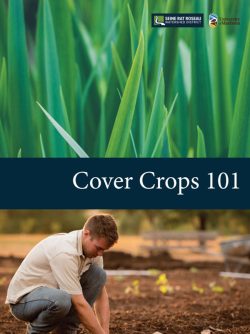 Virginia Janzen and Yvonne Lawley of the Department of Plant Science at the University of Manitoba have developed a 10-page brochure called “Cover Crops 101.” It includes topics on setting goals, fitting cover crops into rotations, species selection, seeding and termination strategies and cover crop evaluation. For each chapter, the brochure also includes links to other resources in Manitoba, Canada and the United States.

It was published by the Seine Rat Roseau Watershed District in March 2022, and is available online at srrwd.ca/projects/cover_crop_tool/


Related
Terminating cover crops
Building soil resilience with cover crops
Planting corn and soybeans green into cover crops
Archive: Cover crop best practices: what to plant and how to get rid of it