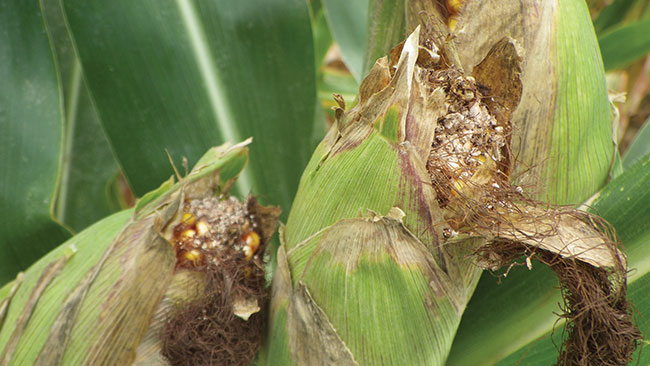 The 2018 growing season was one of the worst years on record for Fusarium graminearum infection in Ontario corn, according to Jocelyn Smith, a research associate in insect resistance management and field crop pest management at the University of Guelph Ridgetown Campus. High Fusarium infection levels meant high levels of mycotoxin contamination, particularly deoxynivalenol (DON), which can render grain unmarketable for food, feed and fuel end-uses.

Fusarium is nothing new for Ontario producers. But a growing body of research points to interlinkages between Fusarium infection, DON accumulation and western bean cutworm (WBC), a relatively new-to-Ontario pest of field corn. Although WBC injury has been shown to cause four to 15 bushels per acre (bu/ac) yield losses, its effect on grain quality and mycotoxin contamination is of greater concern.

Smith is the first author on a newly published research paper that suggests WBC can exacerbate Fusarium infection and thus DON concentrations in corn.

“Insect feeding creates wounds in the plant tissue that provide more entry spots for fungi like Fusarium species to infect,” Smith explains. “Insects may also spread fungi as they move around the plant while they feed.”

Western bean cutworm has been present in Ontario for about a decade. By 2011, says Smith, a major problem had developed: the pest had become resistant to corn hybrids with the CRY1F gene (Herculex 1, SmartStax), which had been thought to control the pest.

Smith and Schaafsma decided to instigate a research study to establish the pest’s resistance to the CRY1F gene as well as to evaluate the relationship between WBC and Fusarium incidence and resulting DON levels.

Study setup and results
The study ran between 2012 and 2014 on three large field-scale sites in southwestern Ontario. Each year of the study, the researchers planted hybrids with and without the CRY1F trait as well as a VIP3A hybrid with similar agronomic characteristics.

The researchers relied upon natural pest pressures for the study, and measured WBC injury, ear mould symptoms and DON in the grain, as well as yields, each year. They also included different pesticide treatments with a high-clearance sprayer: insecticide alone, fungicide alone, and an insecticide-fungicide tank-mix, each applied at different timings.

In total, they ended with nine site-years, but opted to use data from only six of those because Fusarium and WBC levels were low in some years of the study, explains Smith.

“We also tried to develop a relationship or model that could indicate how much WBC injury it would take to see concerning levels of DON in the grain, but that turns out to be really complicated and at this point we don’t have enough parameters in the model to do that,” Smith explains.

“But the bottom line was that regardless of the hybrids we tested, the incidence of WBC injury – basically, whether there was any feeding – did increase the amount of DON. The severity of feeding didn’t have a significant effect – just the fact that injury was there. Even a small nip from a caterpillar could increase DON.”

Because there was no difference in WBC injury between CRY1F and non-Bt hybrids, the study confirmed that the CRY1F Bt trait does not control WBC. The least amount of damage was seen in the plots planted with the VIP3A hybrid.

“But insect control is not the only thing you need to consider,” Smith explains. “You need to consider Fusarium susceptibility of corn hybrids. You could still have DON issues in a hybrid that is relatively resistant to WBC if it is susceptible to Fusarium via silk infection.”

But the VIP3A trait plays a role in that it reduces WBC incidence early after hatching from the egg mass, says Smith, so fewer insects feed on the ears when silk infection has already happened. 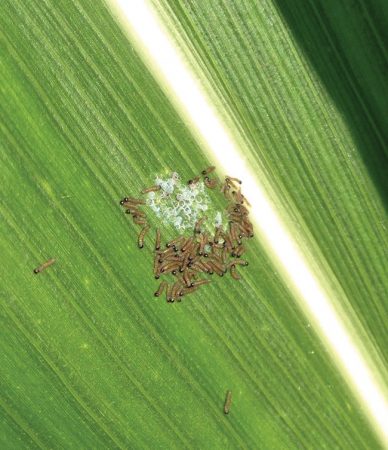 Recommendations
In the study, the researchers tested two insecticide treatments – DuPont’s group 28 insecticide Coragen (chlorantraniliprole) alone, and Syngenta’s pre-mixed insecticide Voliam-Xpress, which contains the active ingredients lambda-cyhalothrin and chlorantraniliprole (Group 3 and 28). They applied these either alone or in combination with fungicides.

It’s important for producers to be aware of the link between WBC injury and DON, Smith emphasizes, which has implications for scouting.

“Growers need to scout to see whether western bean cutworm egg masses are present in the field and consider whether environmental conditions are favourable for Fusarium infection around silking time before deciding whether to spray an insecticide/fungicide tank-mix,” she says. “We don’t want to jump to the conclusion that we should do this every year.”

In 2018, for example, WBC was not a major issue in some parts of Ontario. Egg counts were lower in historical problem areas, but conditions were perfect for Fusarium infection, Smith says. So an insecticide application would not have provided an economic advantage when WBC wasn’t present.

Another important recommendation to note, Smith says, is that fungicide group matters: triazole fungicides are much more effective at controlling DON than strobilurin fungicides. For best control of Fusarium infection, triazoles should be applied at full silking, before silk browning.

Producers should start scouting for WBC in the third week of July and continue scouting every five days for up to three weeks during the moth flight period. The economic threshold for WBC egg masses in Ontario is five per cent, but producers should count this cumulatively; for example, if a producer finds one per cent egg masses on their first scouting day and several days later they count four per cent egg masses, they should consider that the threshold has been reached.