It was the Ides of March 2010, when Scott Chalmers stopped to take the photo above. The moderating winter temperature soared to 4.5 at Melita, Manitoba, that sunny day. The official Environment Canada snowpack had shrunk from 22 centimetres a week earlier to just eight centimetres remaining on this day, March 15. Days later, only a trace of snow remained, and then it was gone for the season.

Two years later, to start 2012, the diversification technician from Melita for Manitoba Agriculture Food and Rural Initiatives sent along the photo with this comment: “This is our most interesting photo we experienced with strip till.  This is likely worth a thousand words.”

It appears the standing stubble holds very little snow at this late point in the winter. Adjacent to it, several inches of snow blankets an area without stubble. And, to each side, something else is going on.

The location, Chalmers says, is a trial site at Melita for the Westman Agricultural Diversification Organization (WADO). It’s a well-sheltered few acres adjacent to the Souris River, which is on the far side of the trees. The view is looking east.

In a typical growing season, WADO has hundreds of small trial plots here for most of the crops found in southern Manitoba. Some management techniques are always being tested, too. This is a sandy-loam area, generally the driest and warmest portion of Southwest Manitoba.

The big block in the centre of the photo, with most of the snow, was tilled up black with a rotovator in the fall, Chalmers says, to produce a ground situation similar to results from fall cultivation.

Wheat stubble is standing in the adjacent block, where the snow has nearly melted away. It’s a zero-till site; the residue wasn’t touched.

To the sides are trials with strip tillage, cultivating eight-inch strips on 30-inch row spacing.

“Those strips are where we did the strip-till, and you can see the stubble sticking up between. That’s the part that wasn’t disturbed. It’s a medium situation, between what a cultivator and zero-till situation would be. We suspect, as well, there would be medium temperatures in those soils,” Chalmers says.

“Strip-till was a blend of the two, with the tilled strips remaining as snowpack ice while the zero-till strips melted,” he says.

At its February peak in the winter of 2009-2010, the Melita area had a 22-centimetre snowpack (about nine inches), according to Environment Canada records. At this WADO site, Chalmers recalls, the snow was fairly well packed and fairly even over the area. Drifting wasn’t a factor.

“It had snowed well above the stubble height, so it took several meltdown days to get it to this point. We had quite a bit of snow.”

Upside down
In this particular tillage trial situation, the photo clearly shows that the zero-till stubble contains less snow than the adjacent black conventional tillage site. Obviously, Nature is messing with good science.

There’s a theory, Chalmers suggests, that exposed stubble conducts heat down and radiates it inside the snowpack. Maybe the stubble contained more snow and simply melted it down faster than the adjacent glazed-over snowpack could melt. A snowpack, glazed over, could insulate the lower snow from early mild temperatures.

He adds, “You‘d think those soils (without stubble) would take longer to warm up but, probably, in the short term when it does melt they get very warm very quickly.”

The same situation occurs on a nearby farm that has both conventional and zero-tillage practices, Chalmers says. When the snowpack begins to melt, it goes down faster on the field of zero-till wheat stubble.

But, he adds, it’s a little different with canola stubble. “What you see in this picture actually seems to flip. The canola stubble will be full of snow; the black side will melt faster.”

As for the strip-tillage aspect, the agronomist says it does have some appeal for sandy-loam soil that may be subject to erosion, if the farm also has GPS autosteer with enough accuracy to plant seed down the middle of the cleared strips.

“It’s something from both worlds. Strip-till alleviates that risk of your soil blowing into a ditch. Also, that strip is supposed to warm up faster so your seed will germinate faster.

“Based on what’s going on here, it makes you wonder if we shouldn’t strip till in the spring rather than the fall. You’d get quick spring melt with the stubble cover, then rip up the strips to get it nice and warm for seeding.”
Brandon perspective

The situation in this mid-March photo looks a little odd but doesn’t really challenge the experience and science that’s been learned by Agriculture and Agri-Food Canada through work with stubble and snow on the Prairies, says Dr. Byron Irvine, AAFC research manager, Brandon.

“If you work them down, most fields end up catching a lot less snow because the stubble isn’t standing,” Irvine says. “They have lots of dark spots where the snow blows off. There are places for the melting to start, with almost bare soils. A normal field that’s been worked, most of the time, will actually melt faster.”

These alternate stubble heights are making a different scenario, he suggests.

At mid-March, Irvine says, the field still is five or six weeks away from the earliest seeding opportunity. Under the insulation of residue and snow, the uncultivated soil will be less cold through the winter. It’s a good thing. Four inches of trapped snow insulation will keep a winter wheat crop alive through the coldest winter.

Differences in stubble cover probably did play a role in this photo because of the narrow trial treatments, Irvine suggests.

“Given the narrowness of the strips, there is a possibility that they are catching more snow. It’s likely to be more dense in those locations because snow blows out of the tall stuff once it gets full at the ends. The other thing is, there’s not as much dark material in there to have it melt.”

In larger AAFC trial plots at Brandon over 10 years, both temperature and snow cover were tracked. While insulation did moderate the soil temperature, the overhead snowpack varied greatly.

“The depth of snow changes so much around a field, surprisingly enough, in stubble,” Irvine says.

Using premarked stakes at their own trial sites, the Brandon research team used binoculars to read the snow cover from a distance while driving past, so they wouldn’t disturb the setting.

“There was a lot of variability, even in settings that looked uniform. Once that eight-inch stubble got full, you would find anywhere between six and 12 inches of snow in it depending on where the drifting happened,” he says.

And, given a few weeks of spring weather, the reality is that the cultivated ground with the higher snow cover in mid-March will dry and warm up earlier than adjacent standing stubble. The stubble will have the advantage in a dry year or dry area, but may hold back spring field work in a wetter year or wetter area.

As for which caught more snow – if either one did – we don’t know. It was the Ides of March, when Brutus betrayed Caesar. 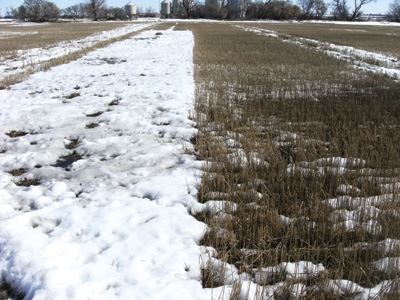