With Group 2-resistant kochia a given throughout much of Western Canada, and Group 2 glyphosate-resistant kochia identified in numerous fields in southern Alberta, farmers and weed scientists are having to reassess their chemfallow weed control programs.

For farmers with or without glyphosate/Group 2-resistant kochia, the message is clear: include multiple modes of action in your chemfallow herbicides.

“I would recommend that any farmer with chemfallow acres needs to mix glyphosate with other groups to help manage resistance,” explains Ken Sapsford, research associate at the University of Saskatchewan. “With the way kochia blows around, even if you have been trying to manage for glyphosate resistance, it could still be in your field.”

With the likelihood of Group 2-resistant kochia on every field, and the additional possibility of glyphosate-resistant kochia, weed scientists Hugh Beckie and Eric Johnson with Agriculture and Agri-Food Canada, along with Linda Hall at the University of Alberta, and Sapsford, put together a table that shows which herbicides can control Group 2- or Group 2/9-resistant kochia.

“The difficulty in looking at labels is that kochia may be controlled by a combination but with glyphosate-resistant kochia, the chemfallow herbicide may not necessarily control it because it is the glyphosate in the mix that is controlling the kochia. There are a lot of questions to be answered,” explains Sapsford.

Sapsford cites the example of Rustler, a glyphosate/dicamba combination. Rustler controls kochia, including Group 2-resistant kochia. However, if there is also glyphosate resistance, the dicamba rate in Rustler won’t necessarily control the kochia as that rate is only rated for suppression when applied as dicamba alone.  Also unclear is whether a Group2/9-resistant kochia plant is as robust as a normal kochia plant.

New research looking at alternatives
The weed scientists are collaborating on research to develop new control solutions for Group 2/9-resistant kochia in all cropping situations. They are looking at both existing and new chemistries. Some may be too expensive for chemfallow, but would provide a last-resort option for growers with Group 2/9 resistance.

Another option that may have to be considered is the return to the old conservation tillage technology called the Noble blade cultivator. Developed in response to the Dirty ’30s, and common on the southern Prairies for many decades, the Noble blade might just be making a comeback. 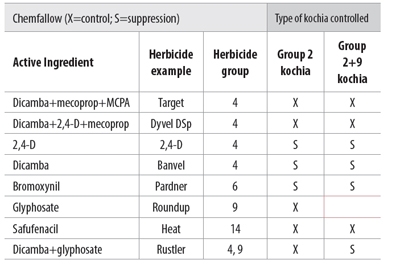 Source: Beckie With Group 2-resistant kochia a given throughout much of Western Canada