Cabbage seedpod weevil is an invasive insect pest of canola. Originally found in Europe, the insect proliferated in the United States and was first confirmed in Alberta in the mid-1990s. 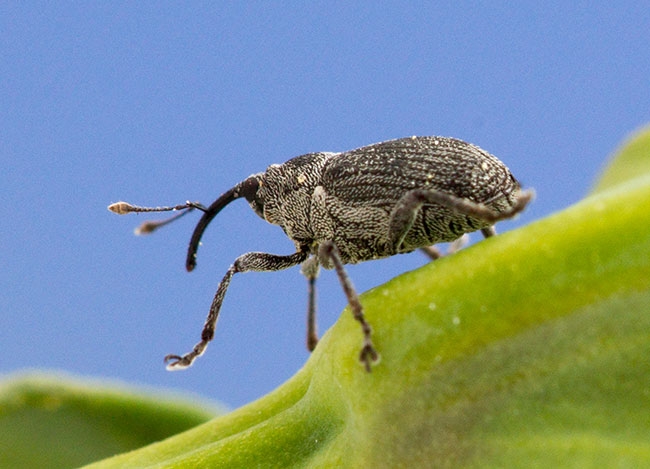 According to Scott Meers, Alberta’s provincial entomologist, the insect’s range has increased in recent years. The pest is typically found south of Highway 1 in Alberta and some parts of southern Saskatchewan. Two years ago, however, it expanded its range north all the way to Edmonton, Meers says. Last year (2017) saw a retraction in range to south of Red Deer, with the Calgary to Medicine Hat line taking the worst hit – its typical range.

“The cabbage seedpod weevil migrates into canola when it flowers,” Meers says. “If you spray too early you may have to spray a second time because the weevils may still be coming in.”

Weevils begin laying eggs when pods have grown in size to three-quarters of an inch, to an inch. This means there’s generally about five days between first flowering and pods developing to the point where weevils can lay eggs on them, and this is the window during which producers should be spraying. “Things happen quickly,” Meers says.

But spraying isn’t always necessary – or cost effective. Some industry researchers have seen agronomists and producers push the economic threshold level down to two or even 1.5 weevils per sweep during scouting. But a new study by Agriculture and Agri-Food Canada research scientist Héctor Cárcamo suggests the bar should be higher.

Thresholds
The study, which Meers also participated in, was conducted over four years from 2010 to 2014 in southern Alberta throughout the cabbage seedpod weevil region. The team sampled 71 commercial fields in the area using sweep nets, sweeping 10 times in 16 areas within each field; they also collected yield data in order to relate insect catches to yield and update economic injury levels.

The threshold recommended based on this new research is 25 to 40 weevils per 10 sweeps, or 2.5 to four weevils per sweep.

Cabbage seedpod weevils are typically found south of Highway 1 in Alberta and some parts of southern Saskatchewan.

Cárcamo says the study revealed other interesting findings. Fields that were planted earlier accumulated more weevils, he says, meaning that delaying planting to, say, the middle of May resulted in lower weevil numbers overall.

Another finding from the southern Alberta study shows fields that were planted early had weevils at early flowering, but at the pod stage they didn’t have many Lygus bugs – another insect pest of canola. Cárcamo says there’s a myth that an insecticide spray at early flowering can “clean the field” to deter future Lygus bugs, but this is not an effective strategy: Early-planted fields generally do not get high Lygus infestations. In other words, producers are not seeing much benefit to spraying early when weevils are below threshold and they spray to attempt to prevent future Lygus issues.

In general, encouraging producers to spray only when absolutely necessary is a priority for the research community.

Cárcamo has issued a proposal under the new agriculture funding framework to look at the viability of a biological control for cabbage seedpod weevil – specifically, a parasitoid wasp that is a natural predator of the insect pest. The wasp has been used successfully in Quebec, he says, but researchers will need to assess its suitability for Western Canada.

Meers says that although researchers must tread carefully when it comes to introducing a new insect to a region, it’s exciting to imagine an overall decrease in spraying for cabbage seedpod weevil.

“Every year (with 2017 being an exception) most of the early canola is sprayed, and there’s just a standing recommendation to spray,” he says. “It would be nice to have some other tools in the toolbox.”