Even though flea beetles have been around for many years, there is still a surprising amount to learn about the insects. A multi-disciplinary group of researchers at the University of Manitoba (U of MB), Agriculture and Agri-Food Canada (AAFC), and Manitoba Agriculture are working on several research products to update economic thresholds, and better understand the insects and their predators. 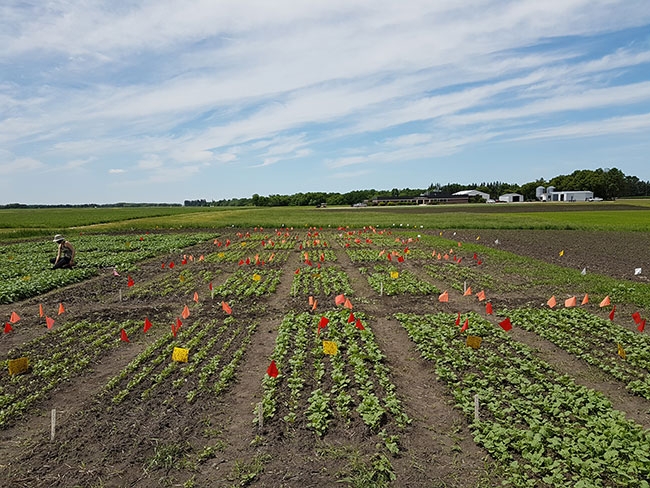 “Despite being a really important pest, we know very little about important parts of the life cycle, such as the larval stage that lives below the ground, [which] can feed on plant roots,” says entomologist Alejandro Costamagna at the University of Manitoba, who presented the preliminary results of several research studies at the Manitoba Agronomist Update in Winnipeg in December 2017.

Other areas of interest are determining if there has been a shift in species of flea beetles, updating the economic threshold for foliar application, and identifying natural predators.

The two main flea beetle species are the striped (P. striolata) and crucifer (P. cruciferae). The most damaging life cycle stage is the adult that feeds on cotyledons and early leaf stages of canola. The nominal economic threshold for spraying is 25 per cent defoliation, which was established over 30 years ago.

“We hope that the new hybrids can withstand more defoliation and recover from the damage better than older varieties,” Costamagna says.

Seed treatments effective
Small plot trials were set up at sites in Manitoba, Saskatchewan and Alberta. Forty trials were conducted over three years from 2015 through 2017. A control treatment was compared to seed treatment only (fungicide and insecticide), and treatments received a foliar application of Matador insecticide at 34 mililitres per acre (ml/ac) when defoliation reached 15-20, 25 and 45 per cent (seed received fungicide treatment only). SY 4135 Roundup Ready hybrid canola was grown.

Flea beetle abundance and species composition was observed weekly and defoliation was monitored Mondays, Wednesdays and Fridays on 40 plants per plot, and plant density was also assessed. Spraying was required on 35 of the trials, and yield data was obtained in 32 of the trials.

Generally, Costamagna says the preliminary results indicate that the seed treatments worked very well, and yields were usually significantly higher than the control, and often similar to a foliar spray at around 25 per cent defoliation. Yields with foliar insecticide treatments were also effective. “When spraying around 25 per cent defoliation, we didn’t seem to loose yield.”

Future analysis of data will look at plant density, flea beetle species composition and abundance, and the effect of planting dates on flea beetle damage and insecticidal control.

“One of the concerns that this raised was that these seed treatments would not be effective if there was a shift to more striped flea beetles,” Costamagna says. “The prediction that they made in this paper was that this might result in a shift in species because the level of control is not as effective. From our data that is what seems to be going on.”

As part of Costamagna’s research, species composition was assessed over three years across the Prairie provinces, at 25 to 29 sites per year. He compared the composition to historical results in the scientific literature.

“The generalist ground beetle predators very quickly ate all of the flea beetles with no difference between flea beetle species. This is very encouraging,” Costamagna says.

A second experiment used caged potted plants in growth chambers. Predator ground beetles and striped or crucifer flea beetles were placed in the caged pots and flea beetle consumption was evaluated after 24 hours. The predators were able to catch and eat some of the flea beetles.

“There are still a lot of questions we are interested in answering,” he says. The next stage of the research is to do caged studies under field conditions.

Additional work is also being conducted on using molecular methods to determine the natural enemies of flea beetles.

While the research is still being analyzed, and much more is to be done to understand flea beetle biology and predator behavior, current management practices for flea beetle control appear to be still valid. Seed treatments provide good control and spraying an insecticide if defoliation reaches 25 to 30 per cent is still the nominal economic threshold to observe.