Malting barley is a higher-value cereal crop that could be a good option for Eastern Canadian growers. A key factor in the successful adoption of this crop is the availability of varieties suited to the region’s growing conditions. Now a project is underway to identify which of the existing malting lines would be best for the east and to develop improved germplasm for further breeding work.

Thin-Meiw (Alek) Choo, a research scientist with Agriculture and Agri-Food Canada (AAFC) in Ottawa, is leading the project. He notes, “Before we started this research project, we had already identified two good malting barley varieties for Eastern Canada: Cerveza and AAC Synergy. Cerveza is on the list of recommended varieties for Quebec and the Maritimes. AAC Synergy is now being tested in the registration and recommendation tests in Quebec and the Maritimes. These two varieties have performed well in Quebec, the Maritimes and New York State. They were developed by Bill Legge at AAFC’s Brandon Research and Development Centre [in Manitoba].”

Now Choo’s project is helping to identify more and better malting varieties for Eastern Canada. Called the Eastern Canada Malting Barley Test, it runs from April 2013 to March 2018. It involves screening hundreds of advanced breeding lines and varieties from other regions to find ones with three essential traits: resistance to Fusarium head blight, resistance to lodging, and high yields under Eastern Canadian conditions.

“Resistance to Fusarium head blight is a must for successful malting barley production in Eastern Canada,” Choo says. The region’s warm, humid growing conditions favour this serious fungal disease. Fusarium head blight reduces grain yield, but more importantly it can produce mycotoxins on the grain. He notes, “The maltsters and brewers do not accept any barley grain contaminated with mycotoxins.”

The often rainy and stormy conditions in Eastern Canada increase the risk of lodging, which can result in lower yields and poorer grain and malting quality. So Choo is looking for malting lines with shorter and stronger straw that are better able to resist lodging.
And, of course, yield is a top consideration. “Any malting barley varieties must yield well in Eastern Canada. Otherwise, producers will not grow them,” he says.

The evaluation process involves several steps. “[First] we plant these barley lines at Charlottetown, Prince Edward Island, and compare them with our standard varieties such as Leader [a recommended feed barley variety] and AAC Synergy. Last year, we identified 26 of these lines as high yielding. Therefore, in 2016, we have planted these 26 lines at three locations across Eastern Canada: Charlottetown, Normandin, [Que.] and Ottawa.” This fall, they will be analyzing the results from the 2016 growing season, and they’ll continue the testing work in 2017. In the years ahead, very promising lines that have not yet been registered in Canada could be entered into the variety registration tests for Eastern Canada.

The project is only testing two-row barley lines. Choo explains, “Six-row barley is more susceptible to Fusarium head blight than two-row barley. Therefore, we do not encourage our producers to grow six-row barley for malting in Eastern Canada.”

Choo is collaborating on this research with Bill Legge, Aaron Beattie at the University of Saskatchewan, Patricia Juskiw at the Field Crop Development Centre, Denis Pageau at AAFC’s Normandin Research Farm, and Marta Izydorczyk at the Canadian Grain Commission. The project is funded by AAFC, the Alberta Barley Commission and the Atlantic Grains Council.

The project’s results will give eastern growers more varietal choices for malting barley production. As well, Choo will be using the superior lines identified through the testing work as parents for crossing in his barley breeding program. Promising malting barley lines from his program will be sent to the Canadian Grain Commission for malting quality analysis. Eastern growers can look forward to possible further improvements in malting varieties down the road.

If growers can achieve malting quality with barley produced in Eastern Canada, it could potentially be a very good opportunity. “Malting barley typically has a higher value than barley grown for livestock, for example. So it would be a value-added proposition for growers,” says Neil Campbell, general manager of the PEI Grain Elevators Corporation.

“I’m not sure what the potential is for malting barley production in Atlantic Canada, but it could be quite substantial because the [craft malt and brewery] business has exploded here in the Maritimes in the last three or four years. Nova Scotia alone has 40 different local breweries that use malting barley and other grains,” Campbell says.

He also points out that, in addition to Choo’s work, other malting barley research is underway in the Maritimes. For example, Aaron Mills at AAFC in Charlottetown is developing recommendations for malting barley agronomic practices and is testing modern and heritage malting varieties in Eastern Canadian conditions.

Campbell also notes the combined sales of Canadian malting barley and malt are worth about $1 billion per year. “So if the Atlantic provinces could even get one per cent of that, it’s a nice little number!” 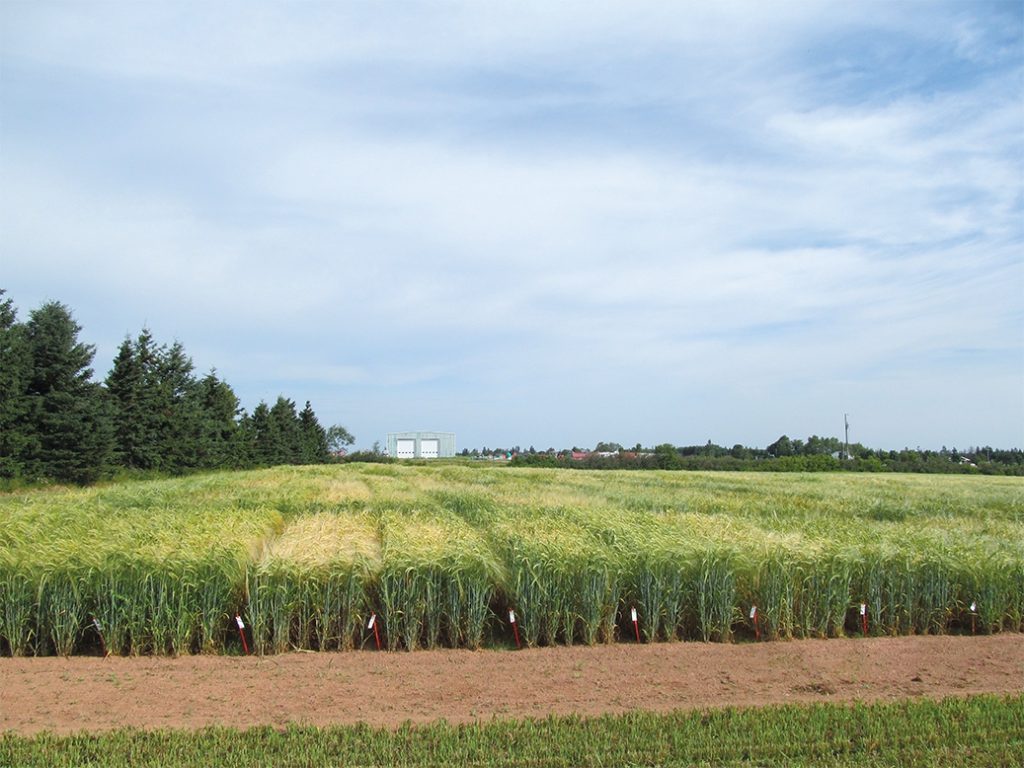 The first stage of the evaluation process is to see how hundreds of different malting barley lines perform at this Charlottetown site.