Maximizing canola yield and net returns depends on many factors, including establishing adequate plant populations early in the season. Even at recommended seeding rates and good stand establishment, previous seeding rate research shows that, on average, canola establishment is about 50 per cent. The question is, then, what happens when growers are faced with low plant populations due to poor spring conditions, frost or other factors?

“In recent years, some growers were experiencing poor canola establishment and lower plant populations for a number of reasons, including early spring frosts,” explains Anne Kirk, former research manager with the Western Applied Research Corporation (WARC) in Scott, Sask., and now at the University of Manitoba. “Growers were faced with lower plant populations than they typically had and were not sure whether or not they should reseed or when it would be too late to do so. As well, crop insurance adjusters were also asking similar questions, so in 2010 we initiated a study to try to find some answers.”

The objectives of this project were to determine the plant populations at which canola hybrids yield 90 per cent of maximum, the effect of plant population on maturity, seed size and green seed, and the minimum plant density at which reseeding would be recommended for hybrid canola. Researchers also wanted to determine the risks with each reseeding option in terms of maturity, yield and quality. Experiments were conducted at five locations in Saskatchewan: Indian Head, Swift Current, Saskatoon, Melfort and Scott, in 2010, 2011 and 2012, to encompass different growing regions and a wide range of growing conditions.

“We compared a variety of seeding rates and plant populations to evaluate the response of hybrid canola to low plant densities canola,” explains Kirk. “The glufosinate-tolerant canola (Brassica napus) cultivar 5440LL was seeded at rates of five, 10, 20, 40, 80, 150 and 300 seeds/m2. The 150 seeds m2 rate is considered to be a standard seeding rate and was referred to as the check for comparison purposes. We also compared the various plant populations and how they affected factors such as lodging, days to start and end of flowering, maturity, grain yield, per cent green seed and fall plant density.” Plots were fertilized to soil test recommendations, and registered herbicides, insecticides and fungicides were applied as required by each site.

“Overall, the results from the low plant population study showed that we were able to reduce plant population by half in all sites with no significant effect on yield,” says Kirk. “The results from all of the site years combined showed that a plant population of 18 plants/m2 was required to achieve 90 per cent of maximum yield. With hybrid canola, when the plant density was reduced, the canola plant was able to compensate by increasing the number of branches and pods per plant. However, it is important to note that moisture was not a limiting factor in any of the years of the study, so in a year when moisture may be a limiting factor, then a lower plant population may be more detrimental than our results show.”

Seeding rates of five to 300 seeds/m2 resulted in plant densities ranging from five to 125 plants/m2, when averaged across all site years. Kirk adds that there was also a big range of branching and podding from low to high plant populations. Averaged across years and locations, the number of pods per plant increased from 150 at seeding rates of 150 and 300 plants/m2, to 851 at a seeding rate of five plants/m2. In general, the increase in pods per plant was due to increased podding on primary and secondary branches, while the number of pods on the main stem stayed about the same.

“However, there are some drawbacks to reduced plant populations, including increased days to maturity, lodging and green seed,” explains Kirk. “Increased lodging at lower plant densities occurred due to the canola plants becoming so large that the stem was unable to support the plant at maturity, and in some cases was susceptible to breaking. In terms of maturity, averaged across locations, the highest plant populations matured nine days earlier than canola at the lowest plant populations. Higher green seed counts were found at lower compared to higher plant densities at most site years.”

Another important consideration is uniformity and distribution of the canola plants in the field. “At low plant populations, growers might not expect the plants to be uniform across the field,” adds Kirk. “In a non-uniform low plant population field, you would expect more of a yield penalty than if the stand was more uniform. Therefore, if faced with a canola stand with lower than the optimum plant density, the decision to reseed will be based on plant density, date and uniformity of the plant stand.”

Making the reseeding decision
In the second part of the study, researchers evaluated reseeding options. Two hybrid canola cultivars, 5440LL and 9350RR, and a synthetic Polish canola variety were reseeded into existing stands of low density canola at two reseeding dates, early and mid-June. A seeding rate of 150 seeds/m2 was used in one treatment, and a rate of 20 seeds/m2 to simulate poor stand establishment in the remaining treatments. One of the treatments planted at 20 seeds/m2 was later killed with glyphosate prior to reseeding to mimic a reseeding situation in which a poor plant stand is terminated and canola is reseeded.

“The best practice for maximizing yields and net return is to target good plant populations in the first place at 70-140 plants/m2, because generally at plant stands below 40 plants/m2 or four to five plants/ft2 then you start losing yield, says Laryssa Grenkow, WARC research manager. “However, if for some reason you do manage to have lower plant populations than you are looking for, this study showed that reseeding with a hybrid variety only provided a positive economic return about half of the time and only at the early June timing. Reseeding with Polish canola did not pay.

“This also ties in quite well with the Saskatchewan Crop Insurance Corporation (SCIC) reseeding benefits program,” adds Grenkow. Below 12 plants, the crop is considered not established. Between 12 and 40 plants is the “choice” range where growers have the choice of whether or not to reseed and are eligible for the SCIC establishment benefit (EB). Above 40 plants/m2 is considered established.

“Therefore, if reseeding to high-yielding hybrid canola in early June when in the choice range (12-40 plants/m2), then there is a 50 per cent chance of showing positive returns,” she says. “The SCIC EB ($60/acre) makes reseeding in early June the more economical choice and helps cover risks.”

Reseeding would be recommended when plant density falls below the level required to achieve 90 per cent of maximum yield. However, the decision to reseed will have to take into account factors such as plant uniformity of field, ability to control weeds, soil moisture conditions, and forecasts and harvest management. When reseeding is required, it is recommended producers reseed as early as possible to reduce the risk of poor stand establishment, and yield and quality reductions due to fall frost. 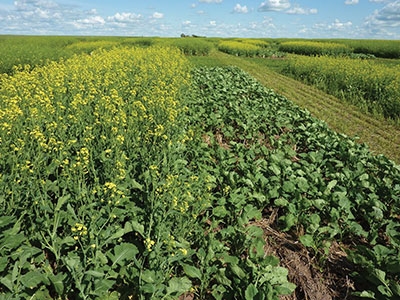