Finding the “Goldilocks” moment depends on many variables. Seeding rates and optimum plant populations for soybeans are a factor of equipment, timing, soil temperature and weather conditions.

“There is always lots of discussion about what optimum row spacing and plant populations should be used for growing soybeans,” says Dennis Lange, farm production advisor, crops, with Manitoba Agriculture, Food and Rural Initiatives (MAFRI). “The typical seeding rate recommendation is 180,000 to 210,000 plants per acre, depending on the row spacing.

“One of the objectives was to determine if there were any significant yield differences between the different row spacings,” says Lange. “Although overall there were little differences in yield, growers should still be cautious when reducing plant populations to try and save seed costs. [It] raises risks particularly if there are poor weather conditions or the potential for frost damage like we saw in 2012, increased weeds and diseases and other concerns. If you drop the plant populations too low, there will be limits to optimizing yield potential.”

Overall, the planter provided the best placement and emergence results under a broader range of conditions over the three years. However, the differences did not always translate into yield differences. In 2010, seeding conditions were very poor and the planter had better results and higher yields than the air drills, but in 2011 and 2012 the yields were very similar.

“The planter performed better in some cases because the machine places all of the seeds in a single row, resulting in a single crack down the entire row in the field and every seed comes up in that crack,” says VanKoughnet. “Every plant that survived was within five percent of each other in height, resulting in an even-maturing stand. In comparison, the air drills may have had good plant survival rates but still resulted in more variability and more distressed or less vigorous plants.

This may be due to depth control, lumps and crusting, and/or surges in the air tube that can leave gaps in placement.” At mid-season, some plants were 50 percent of the height of the most mature ones, which can potentially create problems at harvest in areas where frost may be a problem.

Seed size also matters, so be sure to calculate the appropriate rate. Plant by seeds per acre not pounds per acre. Growers may get away with lowering seeding rates, but that is only if 95 percent of the seeds survive. In a poorer year where only 65 percent of the plants survive and a very tight seeding rate was used, then yield losses can result.

In terms of row spacing, there was little difference between the narrow and wider row spacing in all trials, except in 2012 when the 30-inch spacing showed some disadvantages on the early maturing upright variety only. “We are still not sure what the reason was, but in the 30-inch row spacing with the more upright variety we did see a slight yield penalty,” says VanKoughnet. “The 30-inch rows in this variety matured about four or five days earlier than the narrower rows and potentially weren’t able to take advantage of the last rain we got at the beginning of August. So we aren’t sure if it was because of the moisture timing or if it was because the 30-inch spacing took longer to fill in the rows and was subject to more heat and wind evaporation. This was not observed with the bushier variety.”

Timing of seeding is also critical and soybeans should be seeded into soils that are 10 C or warmer. As a general rule, the faster the seeds come out of the ground, the more uniform they are and the better they grow.

VanKoughnet also conducted another project in 2012 in which they compared five different seeding dates replicated seven times in the same field starting at the end of April and seeding for five weeks until the end of May. At the end of the season, the latest seeded crop yield was virtually the same as earliest one.

“That means that seeding early provided no premium, but did introduce some risk and it’s probably better to wait until the soil is warmer in mid-May, unless wet weather is forecast,” notes VanKoughnet. “However, waiting to the end of May is not recommended either, as that could be too late in some years and in marginal heat unit areas.”

The study also showed that the blacker the soil, the better, because where there was an early frost, the small plants were much more susceptible where there was trash in the rows. For growers direct seeding, heavy trash fields could make the crop much more vulnerable to frosts.

“Ultimately, whether you choose to use a planter or an air drill will depend on how big your farm is and what equipment you already have,” says VanKoughnet. “If you have a good air drill and grow maybe less than a half section of soybeans, consider just spending the extra money on higher seeding rates. However, if you are seeding more than a half section, then start thinking about a planter.”

There are some reasonably priced secondhand planters available, mostly 30-inch, which might give more flexibility. In 2011, with the short seeding window, some growers were relieved to be able to finish seeding canola and wheat at the same time they were seeding soybeans because they had both an air drill and a planter.

Van Koughnet is planning to continue the project another year, and hopes to be able to compare different air drills as well.

“Some of the newer air drills with individual run depth control and on-row packing may be able to provide more precise placement similar to a planter, depending on conditions,” he says. “Although so far we didn’t really see huge differences in yields, growers should be using recommended seeding rates to manage risk, which provides insurance in years where conditions are less than ideal and yields aren’t compromised by using too low seeding rates.” 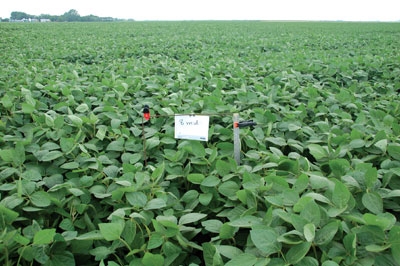