For those farmers in Western Canada who grow InVigor hybrid canola, a research group from Bayer has been investigatging target plant populations in order to help optimize the yield potential of the hybrid. The Bayer Product Excellence team used plots 15 times the size of traditional plots and used equipment designed to replicate farm conditions as closely as possible. This research has been ongoing for three year. 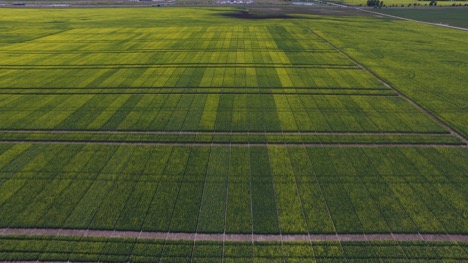 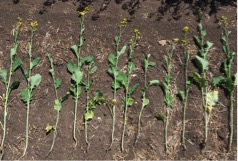 Plant populations that are seeded above the optimum rate can act as a drain on available resources such as light, nutrients, space, and create unwanted competition between plants. The result of this is higher in-season plant mortality and a high percentage of plants utilizing precious resources without contributing to additional yield. Extremely dense plant stands result in canola with thin stalks and reduced root development, which often makes these plants more susceptible to stressful conditions such as high temperatures and low moisture. Another consideration for canola crops with high plant populations and weaker stems are increased lodging, which can trap moisture and reduce air flow through the canola canopy and lead to an increased incidence of disease such as Sclerotinia. 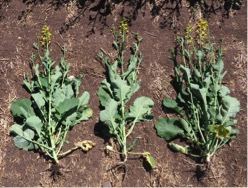 Plant populations seeded below an optimum rate, typically less than five plants per square foot, can also cause a number of challenges such as difficulty controlling weeds due to the reduced competition during early season growth and late canopy closure. Often this results in the need for a second herbicide application to control the weed escapes. Additionally, low plant populations often come with an uneven distribution of plants creating variable plant growth and flowering times. This can make targeting fungicide treatments more difficult and delay both flowering and maturity. Perhaps one of the more serious consequences of low plant population is under-utilization of the seed bed and resources, and the large gaps between the plants makes for inefficient use of placed nutrients and moisture. 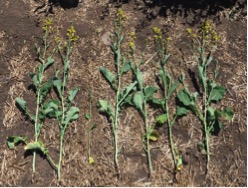 The research recommends a targeted plant population of 5-7 plants/ft2. Based on a survivability rate of 50-70 per cent, that’s an average of 10 seeds planted per ft2. This population offers the ideal balance of seed bed utilization through efficient use of nutrients, moisture, light and space, while offering sufficient crop competition against weeds and maximizing InVigor yields. The recommended target of 5-7 plants/ft2 is not a bullet proof solution for canola plants to protect themselves against the environment or pests, however it will give your InVigor canola field the best chance for success.

Sample of canola plants seeded at an optimal rate