Hard to identify and distinguish from one another, the annual grasses compete with winter wheat and fall rye because their growth habits are similar. Downy brome (Bromus tectorum) densities of 50 to 100 plants per square metre that emerge within three weeks of the crop can reduce winter wheat yields by 30 to 40 per cent. Both downy brome and Japanese brome (Bromus japonicas) are classified as noxious weeds in Alberta. 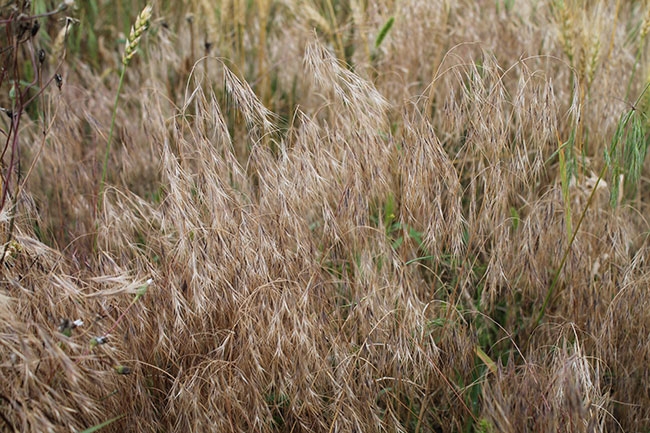 The registration of Focus herbicide for Japanese and downy brome control is good news for farmers. Hard to identify and distinguish from one another

“The weeds were quite common in the 1990s in southern Alberta and then they seemed to have disappeared as a concern. However, they seem to be having a bit of a resurgence and I’m not sure if that is because of the wetter weather we have been having over the last five years, or they are developing some herbicide resistance, or some other factor,” says Brian Beres, a research scientist with Agriculture and Agri-Food Canada (AAFC) in Lethbridge, Alta.

Jeanette Gaultier, a weed specialist with Manitoba Agriculture in Carman, Man., says Japanese brome is less common than downy brome in that province, but even downy brome isn’t that prevalent. It was found in only one of 658 randomly surveyed fields in the 2016 AAFC-led general weed survey.

“That said, it tends to occur in small areas scattered across the province, but where it’s a problem, it’s tough to manage. We also have some bad patches along the rail lines and in some pastures where it has the potential to spread,” Gaultier says.

The registration of Focus herbicide for Japanese and downy brome control is good news for farmers.

Control options
From 2011 through 2013, Eric Johnson collaborated with Beres on a nine site-year trial in Scott, Sask. Johnson, now a weed researcher at the University of Saskatchewan, was a scientist with AAFC based in Scott at the time. The project was conducted at three sites in Scott and Lethbridge and Coalhurst, Alta., with funding provided by AAFC’s Growing Forward program, Ducks Unlimited Canada, FMC and Bayer Crop Sciences Canada.

Johnson assessed a number of pre- and post-emergent herbicides – some registered and some not.

For Japanese brome control, all products tested except Valtera provided very good control – more than 90 per cent in most cases. Consistency of control was generally very high as well.

Since the research was conducted, one of the trial herbicides, pyroxasulfone, was registered in a combination with carfentrazone for Japanese and downy brome control in winter wheat. It is now available as Focus herbicide from FMC Corporation.

“There are some good options for controlling Japanese brome, but the choices are much less with downy brome. Focus was better than the others on downy brome and is a good option now that it is registered on winter wheat,” Johnson said at the 2017 Alberta Agronomy Update in Lethbridge earlier in the year.

Focus is a co-pack of pyroxasulfone and carfentrazone and is applied pre-plant/pre-emergent prior to winter wheat. It has residual activity on downy and Japanese brome and can be applied in a tank-mix with glyphosate in a pre-seed burndown. It requires a minimum of one-half inch of rainfall to move into the soil solution and to be taken up by the roots and shoots of germinating weeds. In addition to downy and Japanese bromes, it controls barnyard grass and green and yellow foxtail, suppresses foxtail barley and wild oats and controls a few broadleaf weeds.