In this era of focusing on short-term results, a long-term viewpoint is indeed, unique. But the long-term crop rotation study established in 1951 at Lethbridge, Alta. is a model for the long view, especially in biological systems where changes can take decades.

“We still maintain the long-term plots. We need to reapply for funding every three to five years for these studies, to purchase seed, fertilizer and pesticides,” Elwin Smith says. Smith is a bioeconomist at Agriculture and Agri-Food Canada (AAFC) at Lethbridge Research Centre.

Smith, along with colleagues Henry Janzen and Francis Larney, established a six-year bioassay study in 1995 that was imposed on the long-term Lethbridge plots to look at the impact of long-term rotations on soil quality, productivity, nitrogen (N) fertilizer effects on wheat yield and quality, and whether N fertilizer can overcome poor long-term rotations. The results were analyzed and published in the Canadian Journal of Plant Science in 2015.

The long-term plots
The soil was an Orthic Dark Brown Chernozem clay loam with level and uniform topography, and calcareous subsoil. Seven rotations were established, reflecting crop rotations that were common in 1951. In 1985, several changes to the plots and rotations were made to add alternate crops being grown at the time and an additional N management component to maintain crop productivity. Thirteen rotations were included in the study from 1985 through 1994 (see Table 1 below).

From 1995 to 2000, all 116 plots were no-till seeded to spring wheat cultivar Katepwa. A preseed burnoff of glyphosate was applied to control weeds. In-crop weeds were controlled with appropriate herbicides. Phosphorus (P) fertilizer was applied with the seed to all plots as 0-45-0, at an average rate of 7.9 kg P/ha (16 lb P2O5/ac).

The rotation plots for each replicate were divided into two randomly assigned strips, one with zero N fertilizer (control) and one strip with N fertilizer applied at an average rate of 56 kg N/ha (49 lb N/ac).

The first two years of yield data were excluded from the bioassay analysis of total wheat yield because of confounding short-term effects of land use the year prior to the study.

“The presence of frequent fallow in crop rotations had a negative effect on total wheat yield, long-term productivity and grain N concentration, even with past and current application of N fertilizer,” Smith reports.

Treatments fertilized with N had a four-year total wheat yield approximately 30 per cent higher than unfertilized treatments. Without the application of N, total wheat yield was highest in the FWWHHH rotation, followed by plots that previously had native grass, and continuous wheat with previously added N. Smith says plots without N and high fallow frequency (FW, FWW) resulted in lower total yield regardless of N added in his study.

In Smith’s study, N fertilizer was unable to compensate for the lower productivity of fallow-based rotations that did not replenish N removed by the crop, or for rotations that were in fallow one-half of the time and had added N.

“The yield differences from this study demonstrated that previous N fertility management and crop rotation impacted current crop yield. Management practices that replenished N to the system had higher current yield, while rotations with fallow reduced current yield. The current application of N fertilizer could not overcome the yield disadvantage from previous systems with frequent fallow and no N fertilizer,” Smith says. “Producers need to recognize the importance of crop rotation and N fertility management on both long-term and current crop productivity.” 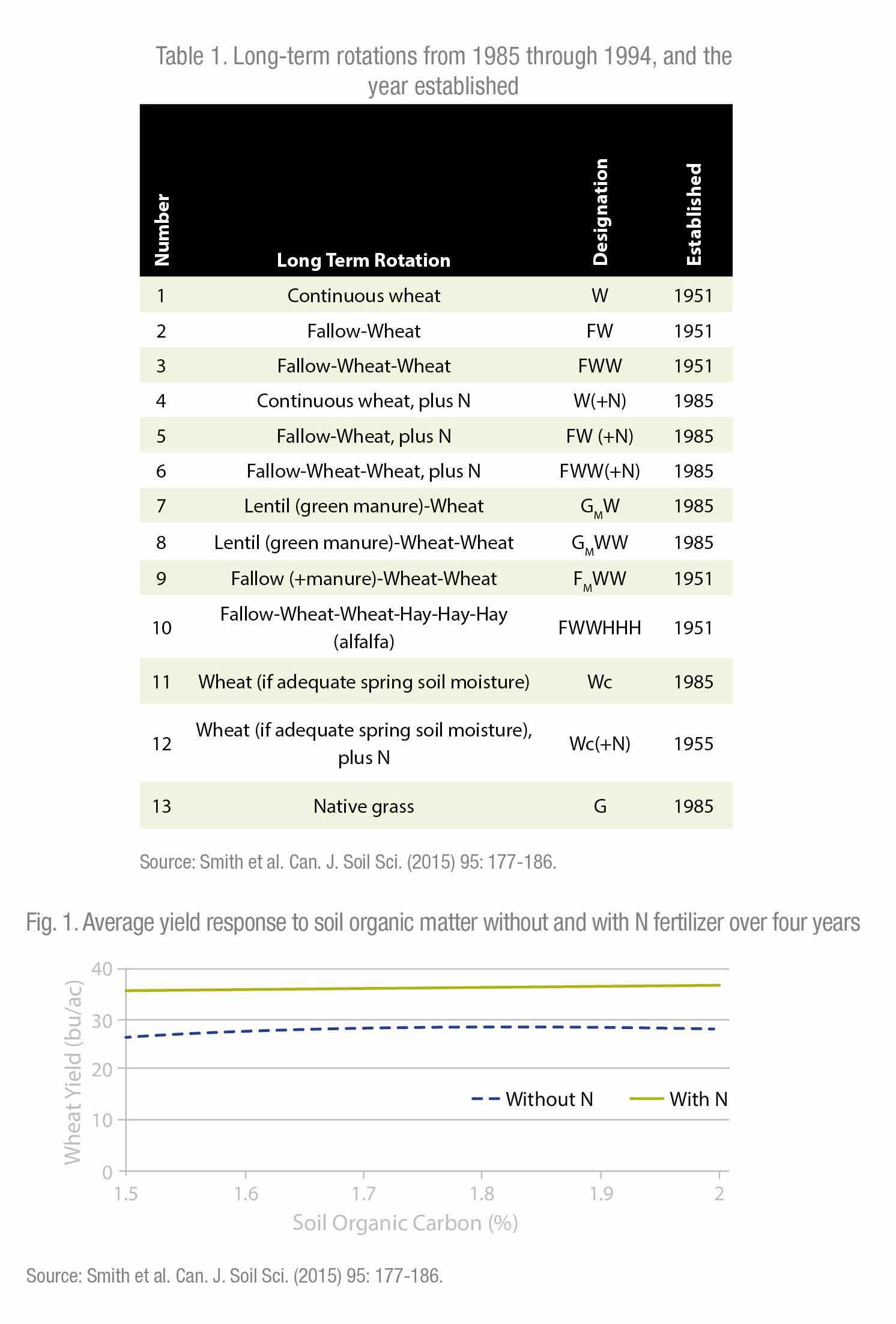