April 2016 - Plant biologists at the University of Illinois have pinpointed the area of genomes within nitrogen-fixing bacteria in roots, called rhizobia, that's being altered when the plant they serve is exposed to nitrogen fertilizer. 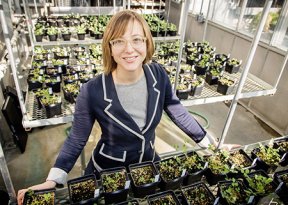 The study, published in the Royal Society journal Proceedings of the Royal Society B, deepens the understanding of an Illinois study last year that indicated rhizobia—which are particularly beneficial to legumes such as clover, beans, peas, soybeans, lentils, and others—are less beneficial for plants when they are exposed to nitrogen fertilizer.

“This is one of the first times we’ve found at the genetic level the basis of an evolutionary change in mutualism,” said Katy Heath, professor of plant biology and one of the study’s authors, referring to the mutually beneficial relationship between rhizobia and plants that has evolved over millions of years. Rhizobia receive sugar from the plant and in turn provide the plant with nitrogen.

Heath conducted the study with Christie Klinger, a researcher at the Beckman Institute for Advanced Science and Technology who was a graduate student in Heath’s laboratory for this work, and Jennifer Lau, a plant biologist at Michigan State University. The researchers also conducted last years’ study revealing that human-made nitrogen fertilizer altered the relationship between rhizobia and plants.

“Humans are dumping fertilizer everywhere,” Heath said. “And so one thing we were interested in asking is whether long-term nitrogen additions would disrupt this long, many tens of millions years old symbiosis that is pretty important to the ability of legumes to compete in natural ecosystems.”

By studying legumes at the W.K. Kellogg Biological Station in Michigan, site of a long-term ecological research site created by the National Science Foundation in part to study the effects of nitrogen fertilizer on plants, the researchers determined last year that in fact fertilizer caused rhizobia to become less beneficial to the plants they served. The new study was launched to determine why that was so.

“This new study is extending that work with whole genome sequencing of the bacteria,” Heath said. “We sequenced our samples from our control group and from the nitrogen-fertilized group, and we located this key region on the genome that appears to be differentiated between those two groups.”

They found the difference in an area called the symbiosis plasmid, which is an area of extra chromosones in rhibozia that enables them to be mutually beneficial with the plants—it’s where the gene is located that actually breaks the bond between nitrogen molecules and the air to “fix” it into ammonium that the plant can use.

“We see that at that region of the genome there’s differentiation suggesting that the effects of the nitrogen fertilizer were to make these less beneficial rhizobia different than the controlled rhizobia at that location,” Heath said. “In the rest of the genome they’re interchangeable. But when you look at that one region they all start separating. That basically means that selection has changed something in that region.”

Heath said that they are continuing to study the topic. She believes that the findings have significant implications as societies deal with a changing environment.

“Why does it matter if we can synthesize nitrogen and dump it on fields anyhow?” Heath said. “It matters because we’re looking for more sustainable solutions. I think we’re looking to not add tons of human-fixed nitrogen, which is a super energy-intensive process. Rhizobia are really special because they can do it themselves.”