Infestations of orange wheat blossom midge are a fact of farming life in Western Canada, where populations can quickly reach epidemic proportions if conditions are favourable.

In 2006, it was estimated Prairie growers lost about $40 million due to midge damage through both yield losses and downgrading. For an individual grower, this could amount to $20 to $75 per acre.

Midge tolerant wheat launched commercially with a bang in 2010 although it had been in the works for many years, even decades prior to that. AC Goodeve VB, distributed by Alliance Seed Corporation, and AC Unity VB, distributed by SeCan, were the first two varieties growers had access to that brought the Sm1 gene for midge tolerance to bear in the ongoing battle against pests in wheat. Now, heading into the 2014 growing season, there are nine varieties for growers to choose from, and more are in the multiplication stages with seed growers.

So how have growers adopted midge tolerant technology? According to Todd Hyra, western Canadian business manager with SeCan, the uptake of these varieties by growers “has been excellent right from the get-go. In Saskatchewan, it’s actually been overwhelming, reflecting the importance of midge there as a pest. In Alberta and Manitoba, it’s somewhat more hit-and-miss; though there is more midge than many recognize, it’s just not as obvious as in Saskatchewan where growers have suffered devastating losses over the last 20 years.”

Growers are not only choosing this technology for their farms to combat orange blossom wheat midge, they are seeing some great performance on yield as well. “If you look at the top yielding wheat varieties in the Saskatchewan Seed Guide, they are all midge tolerant types,” says Hyra. “The on-board protection the Sm1 gene offers results in extra yield on a consistent basis.”


Asked if every grower should be considering midge tolerant wheat on their farm, Hyra advises that growers need to determine their biggest challenges. “Is it lodging or speed of harvest, disease package or midge? In Saskatchewan, midge rises to the top as the biggest challenge very quickly. As you move east, a short, strong straw becomes more important,” he notes. “Every grower has to work through what is his biggest obstacle to consistent high yields, and choose a variety that best works to neutralize it.”

Growing midge tolerant wheat requires growers to sign a stewardship agreement. “This is really necessary to preserve this midge tolerant technology,” explains Hyra. “The easiest solution would have been to require growers to purchase certified seed every year, but that would have restricted uptake of the technology. The compromise solution was the stewardship agreement.” The agreement gives growers access to the technology and in return they are required to limit their use of farm-saved seed to only one generation past Certified seed.

“In all the years I have been involved with this technology, long before commercialization, my experience with growers has been overwhelmingly supportive of the stewardship agreement,” says Hyra. Results from surveys conducted by the Midge Tolerant Wheat Stewardship Team show that 92.8 per cent of midge tolerant wheat (MTW) growers in 2012 agree it is critical to have a stewardship program in place to ensure the effective life of the midge tolerant gene is protected. That is up slightly from 91.5 per cent in 2011 and 90.3 per cent in 2010 (the first year of commercial production). The survey also found that 88.3 per cent of MTW growers agreed an interspersed refuge system prevents a buildup of virulent or resistant midge population, and 86.5 per cent of MTW growers agree that to keep the refuge at the desired level of 10 per cent of the plant population, it is necessary to limit the use of farm-saved seed to one generation past Certified seed. Both of the last two survey questions are showing increasing agreement since 2010 as well.

C.K. Acres Ltd. is owned by Clinton Kirilenko at Landis, Sask., and he farms in an area plagued by midge. “Midge tolerant wheat is a beautiful tool to have on the farm,” says Kirilenko. “Knowing you don’t have to waste time scouting those fields and hauling out the sprayer is huge.”

Kirilenko was an early adopter of this technology in 2010 when AC Unity VB was one of the first two midge tolerant wheat varieties released. He grew AC Unity VB again in 2011 from saved seed and in 2012 he switched to CDC Utmost VB, which was two to three inches shorter and had a stronger straw. Asked about the stewardship agreement he had to sign on to, he says, “You have to respect the technology. The cost is reasonable but not wasting time scouting for an insect that has a very small window when you can spray, and not having to spray at all is huge.”

Kirilenko has not had a bad midge year yet since he started growing midge tolerant varieties on his farm, although in 2010 there was midge in the area. “We noticed less shrivelled-up kernels in the Unity when we were combining that year,” he says. “But if you are seeing damaged kernels then you know you are losing yield out the back of the combine, and that year we had good yields and good quality.” 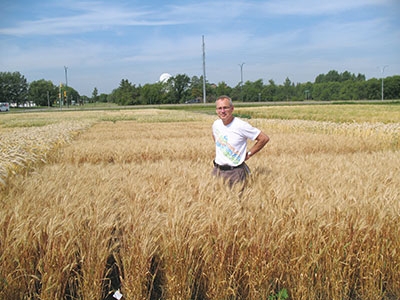