When arbuscular mycorrhizal (AM) fungi snuggle up to a crop plant’s roots, the fungi, the plant and the farmer all benefit. For the farmer, this partnership brings such advantages as more efficient nutrient use and lower fertilizer inputs. Prairie researchers would like to further enhance that partnership. So they’re working towards durum wheat cultivars that are especially compatible with the fungi.

“Mycorrhizal fungi live in the soil; they are in practically all soils all the time. However, they are not very good at using the carbon in the soil like fungi usually do by decomposing dead organic matter,” explains Dr. Chantal Hamel with Agriculture and Agri-Food Canada (AAFC) at Swift Current, who is leading the project. “Instead, mycorrhizal fungi are specialized at living in symbiosis – in partnership – with plants.”

AM fungi are able to form a symbiotic relationship with most plant species. The fungus enters into the plant’s root, where the plant supplies the fungus with carbon and energy in the form of sugar.

In return, the fungus helps the plant in several ways. “The fungus is very efficient at absorbing nutrients from the soil, especially phosphorus, which is difficult for plants to take up,” says Hamel. “The fungus also reduces soil-borne diseases because it is able to outcompete other organisms in the soil for root occupation and because it triggers the plant’s defense mechanism against pathogens. As well, the fungi help in maintaining soil structure.”

Hamel’s project is working towards improving the plant. Her research team for this three-year project includes Dr. Walid Ellouze, Dr. Ron DePauw, Dr. Ron Knox and Dr. Arti Singh. Dr. Danny Singh, who was a durum wheat breeder with AAFC, was leading the project until he joined Iowa State University in the spring of 2013. The Western Grains Research Foundation is providing funding for the project.

Hamel and her colleagues already knew from the results of their previous research that modern durum wheat genotypes vary in their symbiosis capacity. (A “genotype” is the genetic information of an individual organism; for example, if one durum plant has differences in its DNA as compared to another durum plant, then they are different genotypes.)

“That result was very interesting because some people have said that selection of plants in breeding programs leads to losing [non-selected] traits,” says Hamel. “For example, the argument that people often bring up with mycorrhizal symbiosis is that if you select for plants that are resistant to disease then maybe you’ll end up with plants that are also resistant to the symbiotic AM fungi. And some scientific papers have been published showing that some of the symbiosis capacity is lost in modern varieties. However, by looking at more varieties, you find that, although some seem to have lost symbiosis capacity, others still have it.”

“This finding is very important because it means that our modern breeding materials can be used to develop cultivars with improved mycorrhizal symbiosis. If the breeders had to go to ancient wheats for the trait, that would have been a much more difficult task [because there are many genetic differences between ancient and modern wheats].”

Markers for symbiosis
The current project’s objective is to develop genetic markers to allow breeders to more efficiently select durum genotypes with greater symbiosis capacity. A genetic marker is a specific portion of an organism’s DNA that is associated with a particular trait. Researchers use markers to quickly screen breeding material in the lab for the desired traits, rather than having to take weeks or months to grow seeds into plants and test the plants for those traits.

More specifically, Hamel’s research team would like to develop genetic markers to select durum genotypes that have early colonization of their roots by a common, efficient and effective AM fungal species. Early colonization would maximize the fungus’s benefits to the plant over the growing season.

Glomus intraradices is very common in the Brown soil zone, where durum wheat is mainly grown. And it tends to give good growth promotion to wheat as well as other field crops. “We hope that if we can increase the mycorrhizal fungi in the soil, then it will be good for the whole cropping system,” says Hamel.

The researchers are using two approaches to try to figure out where along the plant’s DNA the genes affecting AM symbiosis are located.

Their main approach involves using expression of the trait in the plant to try to find the genes. They are now testing about 150 durum genotypes from Canada and other countries to determine the response of each to Glomus intraradices. This time-consuming task requires growing the plants, then digging up the roots, washing them, staining them and examining them under a microscope.

Once the researchers have identified which genotypes have early AM colonization and which ones don’t, then they will use statistical analysis of the gene maps of the plants to identify the likely location of the genes affecting durum wheat’s response to the fungus.

The researchers’ other approach involves looking for particular genes and then trying to determine if those genes control the AM symbiosis trait in durum. Hamel explains, “Other researchers have found some genes that control the symbiosis in rice. Rice is a grass so it has many similarities with wheat, and it may be that the mechanism of AM symbiosis control is similar. So we’re looking to see if the genes found in rice are also found in wheat.”

So far they have found three durum genes that are similar to the rice symbiosis genes. Whether any or all of these genes control the AM symbiosis in durum is still to be determined. “It’s possible this approach may be faster, but it’s also possible that it won’t work because rice is not wheat,” says Hamel.

One key benefit is more efficient nitrogen use by the crop, so farmers could apply less nitrogen fertilizer, reduce their input costs and reduce losses of nitrogen to the environment. Hamel says, “Nitrogen fertilizer is already expensive. We know the price of energy is going up, and nitrogen fertilizer is produced with lots of fossil fuel so its price will increase too. We also know nitrogen is easily lost. If it rains, nitrogen can be washed out of the soil. It can also be lost in gas form, such as nitrous oxide (N2O), which is a very potent greenhouse gas. So we’re losing nitrogen from our fields, with impacts on air quality and water quality, and farmers are paying for nitrogen, so it’s an economic loss for them.”

Improved symbiosis also would allow farmers to decrease phosphorus fertilizer inputs. “Phosphorus mines are getting depleted now, so more expensive sources of phosphorus will have to be developed. This concern is so important and so urgent that the International Plant Nutrition Institute (IPNI), which is a consortium of fertilizer producers, has provided funding for our work on mycorrhizal symbiosis,” notes Hamel.

Better AM symbiosis also can reduce cadmium uptake by durum wheat. Durum wheat tends to accumulate cadmium from the soil. Fortunately, Canadian breeders have developed low-cadmium-uptake durum varieties. With improved AM symbiosis, cadmium uptake could be even lower. “Mycorrhizal fungi seem to reduce the uptake of metals and we’ve found that the fungi can significantly reduce cadmium uptake. That’s a good thing for international sales of Canadian wheat because some countries have set limits on cadmium levels,” says Hamel.

Another important symbiosis benefit is the reduction of root rot, a serious disease of wheat and other crops.

And with better growth during the durum wheat crop, the fungus will be in great shape to help the next crop in the rotation. 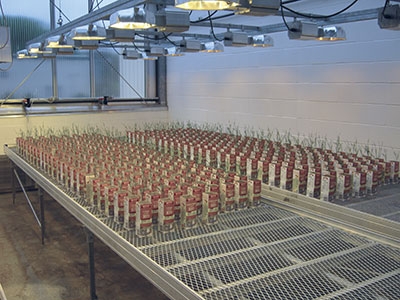 Researchers are testing durum wheat lines for their response to a beneficial fungus. When arbuscular mycorrhizal (AM) fungi snuggle up to a crop plant’s roots