For decades, oat production in Western Canada has been declining. A big part of that decline has been due to a decreasing market for oats in horse feed. But Prairie oat growers believe they have a horse-healthy product. So, using a combination of nutritional research and outreach to horse owners, they hope to recapture some of the U.S. horse feed market.

“We’ve seen a steady decline in oat production starting in about the 1950s. That’s when there was significant shift from horse power to mechanized power; we saw less and less oat production for animal feed, particularly for horses, on the Prairies,” explains Randy Strychar, president of Ag Commodity Research, a company specializing in providing oat market information and analysis.

“In the last 15 to 20 years, the decline accelerated due to the loss of the equine market (the horse market) in the United States. They shifted from feeding horses with oats or oats and a sweet feed [feed mixtures with molasses] to a pelletized, more complex feed. Pelletized feed is based on a least-cost formulation; ingredients can range from corn to barley to oats to wheat midds [a byproduct of wheat milling], plus supplements and other feed ingredients,” notes Strychar, who adds that since the early 1990s, oats consumed in the U.S. horse market has dropped from about 1.1 million tonnes to around 300,000 tonnes.

“In addition, we’ve seen about a 10 per cent decline in cattle numbers in Western Canada over the last 10 years, which has reduced the on-farm feeding of oats. So essentially, the only demand for Prairie oats is from the milling sector, but that sector only has about a one to two per cent annual growth rate.”

To reverse oats’ downward slide towards becoming a minor crop, the Prairie Oat Growers Association (POGA) is working on a three-year initiative to increase oat exports, with the help of $195,000 in funding from Western Economic Diversification Canada. The initiative’s major focus is the U.S. equine market.

Big potential in horse rations
“Oats have been a good crop for Canadian farmers,” says Strychar. “They are easy to grow. They are low input, low cost. They can take drought conditions and excessive moisture, they’re good in a rotation, and they’re easy to market. When we had a fairly robust demand in the equine sector, we had an outlet for almost every quality of oats the farmer grew, from 1 CW [Canada Western] all the way down to 4 CW. Getting that sector back for the farmers is extremely important.”

According to Strychar, even a small increase in the amount of oats in U.S. equine rations would make a big difference to Prairie oat exports. “A horse consumes about five pounds of concentrated feed per day. [Given the number of horses in the U.S.], if the amount of oats in that feed could be increased by just a quarter of a pound, we could be looking at an increase of about 150,000 to 160,000 tonnes.”

To work towards regaining the U.S. equine market, POGA created its Equine Feed Oat Project in 2009. The project’s purpose is ‘to research, educate and communicate information about oats to the equine industry.’ So the project offers a research-based approach to advocating for oats in horse diets.

“The thrust of our approach is that we have discovered oats haven’t really had an advocate in the equine sector,” says POGA president Bill Wilton.

Strychar agrees: “Oats got lost in the shuffle when the equine industry went to a least-cost formulation pelletized feed because there was nobody to stand up and say that oats are still a good feed for horses.”

The Equine Feed Oat Project’s primary goal is to increase oat consumption in the U.S. equine market, says Strychar, who is the project’s co-ordinator. “The secondary goal is to push the price envelope. In other words, we don’t want to just sell more oats cheaply; we want to sell oats at a higher price [based on] quality, reliability and
sustainability.”

One of the project’s first activities was to meet with people involved in the equine industry to get a better understanding of the issues in the equine feed market.

“We determined that oats have been replaced in manufactured feed rations to a large extent by other products,” notes Wilton. “We initially thought the cost of oats was the issue, but as we looked more deeply into it, we think it actually has to do with convenience – to issues like not having the availability of storage, not having timely delivery and so on. Other products closer to the feed manufacturers are getting precedence over oats.”

The project also conducted focus group sessions to gather the views of U.S. horse owners. “We found that horse owners really thought they were getting more oats in their pre-mixed feeds,” says Wilton. “We also discovered they perceive oats as a safe, natural and healthy feed for horses. So we think we have a ready market for our oats.”

For now, the Equine Feed Oat Project’s education and marketing efforts are aimed at reacquainting horse owners with the known benefits of oats in horse diets. In the longer term, POGA hopes to have further research information to support the link between oats and horse health.

As a first step, the project commissioned Dr. Laurie Lawrence, an equine nutritionist at the University of Kentucky, to conduct a comprehensive review of the published research on oat nutrition for horses. From the review, she concluded oats are a horse-healthy grain.

Armed with that information, the Equine Feed Oat Project has now started funding research studies to answer some key questions about exactly how oat consumption affects horse health and performance.

To guide this research program, POGA established the Equine Oat Research Advisory Board in 2012. The board members include a wide range of experts from the U.S. and Canada, including equine nutritionists, oat millers, horse feed manufacturers, equine veterinarians, oat growers, oat breeders and people who communicate with horse owners through magazines and television.

The board has already recommended several research proposals to POGA for funding. For example, POGA and Saskatchewan’s Agriculture Development Fund have provided a research grant for a two-year study by Lawrence to compare the effects of oats, wheat midds and corn on gastrointestinal issues in horses.

“There is some really preliminary evidence that eating oats might lead to a reduction in gastrointestinal issues in horses, which could potentially prevent the onset of colic [abdominal pain, a serious health problem in horses],” says Strychar. “So we want to investigate that further.”

In another study, equine nutritionist Dr. Lori Warren from the University of Florida aims to determine whether oats with higher beta glucan levels would benefit horses. Wilton says, “We know beta glucan has health benefits for people; we want to know if those benefits would translate to horses.”

POGA hopes such studies will provide scientific information that could be used in extension and marketing efforts to encourage horse owners to buy rations with a higher proportion of oats. With that increased demand, oat production on the Prairies could increase, benefiting oat growers and others in the oat value chain.

“For instance, if the research proves that a higher beta glucan content benefits horses, then we would encourage Prairie growers to grow oat varieties with higher beta glucan. Whether producers will get more money for those, I don’t know. But if we can increase the market for our oats, then we should be able to maintain a more consistent supply and get a premium price,” says Wilton.

If the Equine Feed Oat Project’s efforts are successful, Strychar believes Canadian oat exports to the U.S. horse market could again reach at least 1.1 million tonnes. “Our target is about 1.6 million tonnes, which would make oats close to the third largest export of an agricultural product in Canada.”

Other strategies
In addition to its equine market efforts, POGA is working on some other strategies to help increase Prairie oat exports to food and feed markets.

For example, the association is hoping to find ways to address some challenges in the transportation system for oats. “We want to see if we can bring together oat shippers and buyers to talk about what each can do to make the system more efficient. Maybe that will encourage greater use of oats,” says Wilton.

“We also want to make sure we’re shipping the right way to places like Mexico. We’re told we can’t be competitive in some cases shipping to Mexico. But Australian oats come to Mexico. It’s been a long time since I was in school, but I know it’s a long way from Australia to Mexico.”

POGA is also working with a consultant to expand Prairie oat exports into the food and feed markets in Mexico. “We think the Mexican market and the Mexican experience could be a way to open up our opportunities into Central America as well,” says
Wilton.

One of POGA’s key strategies is involvement in the Prairie Oat Breeding Consortium, which received funding under Growing Forward 1. The consortium is a joint program between Agriculture and Agri-Food Canada (AAFC) and the private sector. “The members include all of the major North American oat millers, POGA, SeCan, FP Genetics and a seed distributor from Australia, who put up the industry portion of the money,” explains Wilton. This industry-driven breeding program aims to develop disease-resistant oat varieties for the Prairies with the processing and nutritional qualities desired by processors and consumers.

With POGA’s combination of strategies to increase equine and food markets for Prairie oats, the trend line for western Canadian oat production could finally be on its way back up. 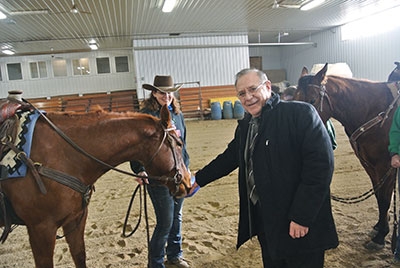