In an era of short-term results, managing and maintaining long-term thinking is commendable.  In a long-term dryland cropping system study near Bow Island, Alberta, researchers have been able to confirm trends in crop productivity and soil organic carbon (SOC), and to determine the impact of crop rotation and fertility amendments on N balances and net greenhouse gas (GHG) emissions. Dr. Ross McKenzie, research scientist – agronomy with Alberta Agriculture and Rural Development (AARD) at Lethbridge, Alberta, established the study in 1992 and maintained the project continuously. Results were calculated after the first 12 years of the study, and sites were resampled in Year 18 in the fall of 2009 to confirm the trends and impacts.

Although long-term studies are often a challenge to keep up, the information gained is invaluable and can confirm impacts with more surety than short-term studies.

“The great thing with some of these long-term trials, is that after 10 years, or in this case 18 years and closing in on 21 years, we can see the benefits and impacts quite clearly,” says Dr. Eric Bremer of Symbio Ag Consulting at Lethbridge, Alberta. “For example, we really didn’t see any crop fertilizer responses in the first six years of the study, because the land had been in continuous, irrigated cereal crops for 20 years prior to starting this long-term dryland project. We expect residual fertilizer and other factors likely had an effect in those first few years.”

Six crop-rotation treatments were included in this long-term experiment:

The oilseed phase of the FOW rotation was flax from 1992 to 2003 and mustard from 2004 to 2009. The legume phase of the LW rotation was a green-manured chickling vetch from 1992 to 1995 and field pea harvested for seed from 1996 to 2009. All phases of each crop rotation were present each year. Over the time of the study, new seeding systems, technology and varieties have been in keeping with the accepted practice at the time and today the plots are all direct seeded.

Fertilizer N increases SOC and yield
The results of the long-term rotations measured the changes in soil N and SOC levels. Overall, the application of synthetic fertilizers consistently increased crop yield and SOC, with greatest impact in perennial grass and continuous wheat rotations and least impact in rotations with fallow or annual legumes.

“With this study, we are quite confident there is between 20 and 30 kilograms per hectare per year of N going into the system from sources other than synthetic fertilizer,” explains Bremer.
Based on N balance, N inputs other than fertilizer were 16 to 30 kilograms of N per hectare per year in rotations without legumes. “Most of the additional N is likely atmospheric deposition and the results are consistent with other long-term trials at Lethbridge and Swift Current. The study at Bow Island is very even and uniform and we can see the results with even more precision than in some of the other studies.”

Legumes contribute to positive N balance
Through these long-term measurements, researchers were able to confirm how great the impact of legumes in rotation really was. At the beginning of the study, the impacts were fairly small, but over the past 10 years researchers have been able to confirm at least an additional 37 kilograms per hectare per year of N (averaged over whole rotation) going into systems with legumes. These systems are benefiting from increased soil N for the next crop, as well as good harvest yields of field pea in rotation.

“Over the time span, we are quite confident with these measurements of soil N balance in the various systems” explains Bremer. “We also found that after 18 years in continuous annual crops, losses of synthetic fertilizer N were 32 percent in annual crop rotations and three percent in perennial grass, which is much lower than previous suggestions of up to a 50 percent loss of applied fertilizer. These findings confirm what we long suspected, that long-term N efficiency is better in continuous wheat and perennial grass systems than the other systems.”
One of the treatments was a compost application, either once every three years or once every six years. “The compost application was generally effective in supplying all of the P requirements for the crop rotation, but additional N fertilizer was required to balance the crop N requirements. The compost application consistently increased SOC in all of the crop rotations in which it was applied.

“The continuous cropping systems showed increases of two to three tonnes per hectare SOC compared to systems that include fallow,” explains Bremer.

The results of this long-term cropping system study provide valuable information and impact measurements for researchers and farmers. “Trying to measure impacts for many of our agriculture problems is very difficult in shorter two- or four-year projects, particularly as this project confirms that few results showed up in the first six years of the project,” says Bremer. “In 2012, this project will be going into its 21st year and we expect to be able to learn about the cropping system benefits in years to come.”

Bremer appreciates the efforts of McKenzie and his AARD team for continuing to keep this project going. 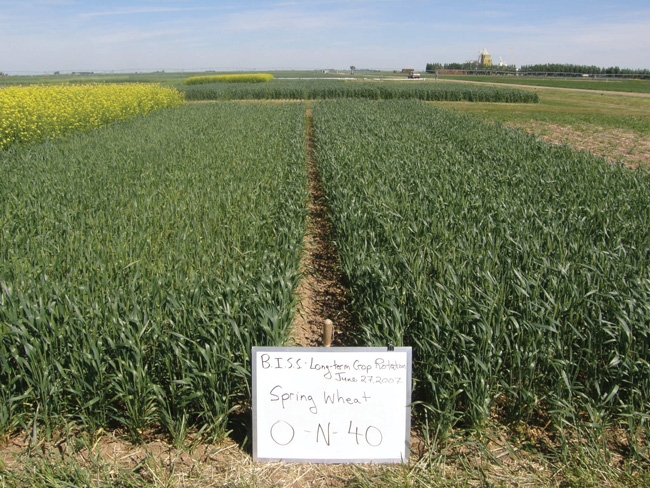 Synthetic N fertilizer treatment resulted in increased soil organic carbon over the long term. In an era of short-term results
Print this page