Knowing how to manage moisture in your grain bins is very important, especially now that more and more growers are building on-farm grain storage systems. “Having the capacity to store grain gives producers marketing options and flexibility,” notes Eric Richter, an agronomic sales representative with Syngenta Canada. “However, there is a lot of risk involved. There is the potential to lose hundreds of thousands of dollars if the grain is not cared for correctly.”

The key is to purchase the right technology and ensure it’s working properly over time. “The first step is finding out the moisture content of your newly stored grain using a good-quality moisture tester,” says Helmut Spieser, a field crop conditioning and environment engineer with the Ontario Ministry of Agriculture, Food and Rural Affairs. “It’s worth it to purchase a good new one.” However, he stresses that proper care of the unit is also very important.

Devin Homick, a grain originator with Great Lakes Grain in Delhi, Ontario, agrees. “Hand-held moisture meters on a farm tend to get thrown around, which can cause dysfunction,” he says.

“Farmers don’t get them checked often enough, and they assume they’re getting correct readings, but that’s often not the case.” He also notes that many growers have stationary moisture meters, but that these are also very delicate, and can easily become inaccurate with being bumped.

The answer is to check your moisture tester regularly for accuracy.

“An easy way to do this is to moisture test a sample with your unit, and then have the elevator test it to see if the readings are the same,” says Spieser. “If it’s not working, contact the company and a technician will calibrate it for you. However, keep in mind that it isn’t possible to calibrate some older units.” Homick also encourages farmers to check their moisture meter readings with those taken at their local elevator. “We have two at every facility and they’re calibrated professionally on an ongoing basis,” he says. “We change the setting for soybeans, corn, etc. and the newer portable ones for farms have settings as well.” He notes that while the readings of two meters will never be exactly the same, anything within 0.1 is acceptable. “If the difference is in that range or beyond that range, you definitely need to calibrate your tester,” he says. “The newer testers also have a scale incorporated, so that you don’t have to weigh the sample beforehand. The tester lets you know when you’ve added enough grain or beans.”

Driving moisture out
There were high incidences of ear moulds this year in southern Ontario, and Richter hopes growers over-dried their corn slightly to stop mould growth. “If you don’t over-dry it a bit, and you try to store slightly damp corn with just fans to dry it, you can easily see accelerated mould growth,” he says. “The storage temperature matters, and a warm temperature can also contribute to mould growth in storage, so make sure you have a temperature sensor inside your bins.”

Richter notes that there are three major factors in corn drying costs. “It’s a variable expense on an annual basis, anywhere from $40 to $100 an acre, depending on fuel costs (natural gas or propane), growing season conditions and hybrid portfolio,” he explains. “’Hybrid portfolio’ means the practice of choosing hybrids so you can spread out your maturity dates to maximize yields and minimize drying costs.” Full season hybrids will have higher yields, but will be more expensive to dry. Richter says having different maturity dates also means that you won’t have large volumes of wet corn that need drying at the same time.

Richter also advises adjusting the combine before switching to harvesting a different hybrid. “This will produce clean grain for storage, with a low percentage of fines, stalks and cobs, and also save you drying costs,” he says. “I also recommend a pre-clean before storage to remove fines. When you have a lot of debris, it’s harder to dry the corn, and it’s also more difficult to run air through your grain during storage.”

Once the grain is stored, farmers have the option of opening bins over the winter season to try to decrease the moisture content of their grain or soybeans. Homick says it’s not easy in southern Ontario to get low-humidity days. “The amount of moisture coming off the Great Lakes makes it a challenge to find a day where you won’t be putting high-humidity air in your bin,” he says. “That’s why investing in a high-quality relative humidity tester is important.”

Spieser agrees. “Do numerous moisture tests in different parts of the bin at various depths to get an accurate picture of your grain, but also test the relative humidity of the outside air,” he says. “Invest in a good-quality tester. You can buy hand-held units that measure wind speed, temperature and relative humidity with a digital readout. By knowing the air temperature and relative humidity you can determine the equilibrium moisture content (EMC) of the grain. If you move air with these properties through the grain for a long enough period, the grain will approach its EMC.” He notes that cereal grains and soybeans give up and absorb moisture very easily, but high-temperature dried corn does not.

After you’ve decided to open your bin, you must also keep an eye out for frost formation. “As the moisture leaves the grain, you can get rime frost depositing on the cold wire of the bird screen,” notes Spieser. “This frost can build up and completely block the exhaust vents. The fan is still running and enough pressure can build up that you can damage the bin roof. So keep an eye on your vent screens, and shut the fan off if it’s getting covered in frost. 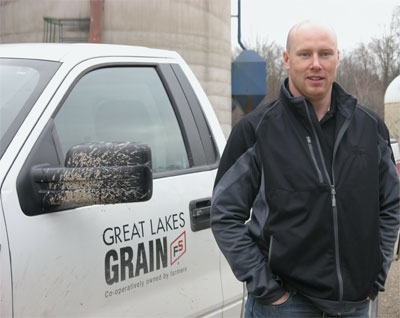