When they throw the “kitchen sink” at soybeans, researchers find narrow rows and foliar fungicide give the best bang-for-the-buck. For maximum soybean yields, these two factors are standing out as essential in a three-year, six-state research project that has been focused on improving soybean yields. The findings are considered relevant, as well, for Manitoba’s burgeoning soybean industry.

University of Minnesota colleagues Wade Kent and Landon Ries reported some findings in Winnipeg at the 2011 Special Crops Symposium. Third-year trials were completed with the 2011 growing season. The research is sponsored by the United Soybean Board.

As the Monsanto doctoral fellow for corn and soybean production and physiology at the University of Minnesota, Kent co-ordinates and analyzes the crop inputs portion of the multifaceted research in all six states. Economic analysis, the final stage, is due to be complete by the end of 2012.

Essentially, the soybean board invited researchers to apply all the crop input options in a systematic fashion, to tease out what is really important for improving soybean yields. It’s being called the “kitchen-sink” study.

Other aspects include seeding rates and a soil fertility study focused on fertilizer carryover in soybean grown in rotation with corn.

In the big picture, soybean yields have been increasing at 0.3 to 0.4 bushels a year, Kent says. Corn has been doing better, as a production system, with average annual yield increases close to two bushels a year.

“High commodity prices (for soybeans) have caused growers to look at alternative methods to increase yields,” Kent says. “This study looked at all the popular inputs that growers are implementing, from a system perspective, to test whether applying all these products would increase yields.”

The researchers set up a control plot with basic recommended inputs and a “kitchen-sink” plot with five extra inputs pushed to the limit. In the plots between, they systematically removed the extra inputs, one by one. They also explored the impact of heavy seed populations with narrow row spacing.

With exceptions, the research is showing “a significant yield increase when we apply the kitchen-sink system to the control,” Kent says.

Wide-rows limited
They discovered that throwing the kitchen-sink at 30-inch rows failed to produce any more yield than the matching control sites with 30-inch spacing. With present input options, yields on wide row spacing seem to be limited or capped.

“If you plant soybeans in 30-inch rows or wider, the application of these products does not seem at all warranted,” Kent says. “Application of all the products available seems to be a beneficial management step only if you’re in narrow row spacing. For 30-inch row spacing, go back to basic soybean production and accept that you probably are sacrificing some yield compared to planting in 15-inch rows. You will benefit more from hitting your target population, planting on time and selecting high-yielding varieties adapted for your region.”

Kent further explains that Integrated Pest Management should be implemented.  “If disease gets to an economic threshold, application of fungicide is warranted. If you plant early into cold, wet soil, utilize a seed-applied fungicide. I would not recommend a soil inoculant if you’ve had soybeans in the last five years on those soils.”

On narrow rows, however, there appears to be real room to improve yields with a kitchen-sink approach to treatments.

“We see a favourable response to narrow row spacing across everything, especially due to the fungicide application. From an economic standpoint, on 15-inch rows, you’re going to see some return on your investment for the application of these products as a system,” says Kent.

Foliar fungicide essential
With the five kitchen-sink applications, the scientists hoped to identify some interaction and differences in yield-boosting roles within the overall yield increase.

There was “little to no interaction between products” that they could observe, Kent says. Ability to discern those differences, however, was limited in this study. It would have required six replications of each possible input combination, or approximately 300 trial plots, to develop solid science for the kitchen-sink treatment components.
“We went through and systematically removed single products. There was no significant change in yield until we removed the foliar fungicide,” Kent says.

To enhance the response difference, the research tried “early” and “late” management approaches. For the early approach, they applied only soil fertility, a seed treatment and a seed inoculant. For the late system, they only applied foliar fertilizer and foliar fungicide.

“We noticed that the late-season treatment responded favourably, and was comparable to the kitchen-sink yield. Of the two products, it looks like that’s solely due to the application of the foliar fungicide,” he says.

Kent did a disease rating before and after the fungicide application. The disease ratings were below the economic thresholds before, and a week after, the foliar fungicide treatment.

“So, it looks like the response is likely due to the control of fungal pathogens that are present at the time of application, even though they are below economic thresholds,” Kent says.

One theory, he says, is that early senescence is being prevented because the fungicide is suppressing ethylene production. Under stress, soybeans produce ethylene and ethylene is known to induce early senescence. In these trials, they did not see any maturity differences as kitchen-sink treatments varied.

This finding also gives reason to reconsider the economic threshold for foliar fungicide applications. “The northern states seem to show the most consistent yield response to foliar fungicide.  I am going to do a complete economic analysis of this when I have all the data for the six states,” he says.

Only one foliar fungicide, Headline, was used in the study. “We did not look at response differences with fungicides, but that is a potential avenue of research now.”

The overall impact of the kitchen-sink approach, across six states and 54 research sites, shows a general yield benefit of two to four bushels per acre.

Soybean producers have at least five options for improving their yields with specialized inputs and attractive commodity prices that make them more willing to invest in the products.

Kent says, “We took all of those products and used them as a day-to-day management system. Growers are more willing to apply multiple products in one growing season, today. By going through and removing one at a time, we tried to identify whether one of these products was providing a consistent response, or the greatest percentage of response. What we’re seeing is that it looks like the fungicides were doing that.”

As a footnote, he noted, they discovered no benefit in the northern states from the higher seeding rate. 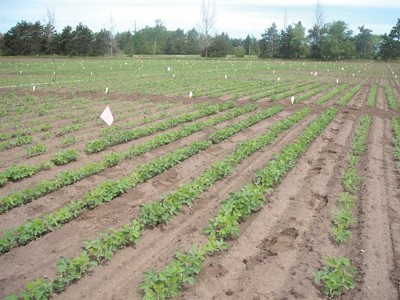