It’s silent, but there’s definitely a dialogue going on under your feet when pulse seed is germinating, says Jeff Bennett, agronomist with Novozymes BioAg Canada, Saskatoon.

When the plant-bacteria conversation goes the way you want, it will improve your income from the field by increasing the root nodulation on peas, lentils, and soybeans. The increase can provide up to an extra 3 bu/ac, according to Novozymes.

The dialogue
Understanding the science of the plant-bacteria dialogue that leads to nodulation in legumes has been a slow process. In the past 20 years or so, scientists have unveiled why and how the underground dialogue takes place. The root and the rhizobia each send signals so they can “find” each other.

Legume roots secrete a complex molecule known as a flavonoid. When the rhizobia detect the flavonoid, in response the rhizobia sends back a signal by secreting a compound known as LCO or “nod” factor. In effect, it’s a polite “nod” to the root that the bacteria it needs for nitrogen is nearby.

“Plant signal molecules or flavonoids, is a general term for molecular compounds that plants exude to communicate with micro-organisms. Many plants, including lentils, peas, and soybeans, use them,” says Bennett. “The return signals from the bacteria are lipo-chitooligosaccharide, also known as LCOs or nod factors.”

“Think of it this way: the plant says ‘I need nitrogen.’ It sends out a signal for help in the form of a flavonoid molecule. The rhizobia or bacteria are just hanging out in the soil. When they receive the flavonoid, it stimulates a gene inside the bacteria to produce nod factor. When nod factor is received, the root hair starts to curl and that’s when the infection process takes place,” Bennett says.

After the nod factor is detected, responses are triggered in the plant. The root hair starts to deform and curl. As it curls, cracks develop that open gateways for the rhizobia to enter (infect) the plant.

The infection spreads from the hair to the root, triggering a specialized cell division in the root. Out of this process, a nodule appears. More bacteria now enter the new nodule. Like caterpillars, the infecting bacteria metamorphose into nitrogen-fixing bacteroids, which then turn into nodules.

The nodules take nitrogen from air in the soil, making it available for the legume’s metabolic processes. The legume feeds the rhizobia with carbohydrates, so it can produce more nitrogen to feed the plant.

“In the rhizosphere, rhizobia feed off other sources, but a symbiotic relationship is a much more effective and efficient food source. With the right legume, the bacteria can make nitrogen available to the plant while the plant feeds carbohydrates to the bacteria. It’s energy-driven,” explains Bennett.

Starter signals
Peas, lentils, and soybeans are relatively new to the southern Prairies. The rhizobia they require for nodulation need to be introduced. Several companies supply that inoculant; however, only Novozymes has the technology to supply both the rhizobia and the patents to produce flavonoid and LCO products.

On the flavonoid side of communication, Novozymes released PulseSignal II, in 2010, a liquid product for peas and lentils. The corresponding nod dialogue comes in a different product,

Optimize. It becomes available in 2012 as a granular formulation for peas. Optimize was registered for soybeans in 2011.

“We start the process before the plant discovers it needs nitrogen,” Bennett says. “It’s energy-efficient, and you see immediate benefits. Optimize is the LCO molecule from the bacteria to the plant. PulseSignal II contains the flavonoid. We have two unique products utilizing this technology; you can take your pick as to which is a better fit.”

In the granular form, Optimize can be put in the air tank and go into the furrow with the seed. PulseSignal II, is a liquid, and can be mixed with certain seed treatments. The treated seed should be planted the same day.

“Both products get that relationship going, as soon as possible, between the plant and the bacteria,” says Bennett. “If you’re a liquid guy, try PulseSignal II. If you’re set up for granular and don’t need the phosphate benefit of Pencillium bilaii, [found in TagTeam] then use Optimize.”

Bennett ran field trials in 2010 with PulseSignal II on lentils and peas. Generally, he says, it produced one to three bushels more yield than competitive liquid or granular products.

“Everyone who did a trial with PulseSignal II in 2010, used it again in 2011. There has been a very positive uptake,” he says. 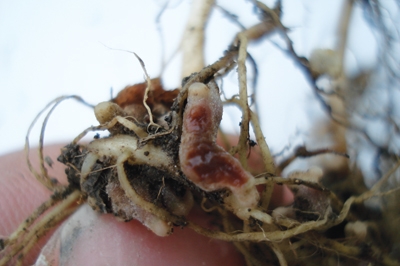