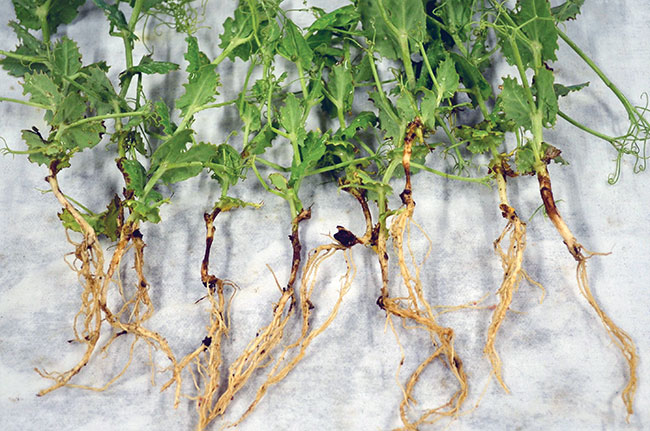 Sometimes in nature, one plus one equals more than two. Synergistic relationships where two organisms are better together are not uncommon, but they can throw a real curveball at a grower when they happen to be between two crop pests that are already difficult to manage on their own.

“We knew the life cycles of the two pests overlap, and there was another study showing an interaction between a related insect, the clover root curculio, and Fusarium species in alfalfa. So, there was a precedence to show this could occur between Fusarium root rot and pea leaf weevil,” Chatterton explains.

Fusarium root rot (FRR) is a major root disease of pulse crops on the Prairies, with yield losses in field peas ranging from 10 to 30 per cent in a typical year, and up to 60 per cent loss with severe infections under optimal conditions. Fusarium root rot causes lesions to form on the roots, restricts water and nutrient uptake by the crop, and eventually prematurely kills the plant.

Pea leaf weevil (PLW) (Sitona lineatus L.) is an important early season pest of field peas and fababeans. While the adults cause defoliation with their characteristic U-shaped feeding notches in the leaves, the major economic damage is from the larvae feeding on the Rhizobium bacteria in the root nodules. Up to 90 per cent destruction of root nodules has been reported in highly infested pea plots in southern Alberta, ultimately decreasing nitrogen-fixation and overall plant yield.

For the research study, Fusarium avenaceum was chosen as the test pathogen because of its aggressiveness on pea, as well as it being the most common Fusarium species found on the Prairies.

Pests thrive better together
When Fusarium and PLW larvae were both present on pea roots, the root rot infections were more severe compared to Fusarium alone. This increase in FRR was likely due to an entry wound into the plant and the destruction of root nodules. Because Fusarium species are “opportunistic,” they require the plant to be stressed in order for infection to take place. A nibble on the nodules from a pea leaf weevil larva provides the perfect entry route into the plant for this pathogen, resulting in the higher infection rates and more severe root rot symptoms observed.

While PLW larvae reduced the number of nodules due to feeding, the presence of both Fusarium and PLW larvae together further decreased nodule numbers. The amount of leghemoglobin produced within the nodules was also lowered. Leghemoglobin is the protein that carries oxygen to the nitrogen-fixing Rhizobium bacteria and is what gives a healthy, functioning nodule its pinkish-red colour. Interaction between the pests resulted in an overall decrease in nodulation efficiency of the plants. The presence of PLW larvae also caused plants to produce nearly all nodules in the crown region, rather than forming the ideal combination of crown and lateral root nodules. Taking all of these factors into account – fewer and less efficient nodules that were concentrated at the crown – the plants may have been unable to produce sufficient amounts of nitrogen due to PLW larvae feeding, and were consequently more susceptible to FRR infection.

Not only was the presence of PLW larvae beneficial to Fusarium, but the relationship was mutualistic for the PLW as well: more PLW pupae were found on pea plants infected with FRR than on plants that were Fusarium-free. This result was a bit surprising. “The mechanism is intriguing and it would be interesting to find out how this happens. Perhaps the plants overcompensate and produce more nodules that are eaten by the PLW larvae before we can measure them,” Cárcamo says. More nodules would mean more food for the larvae, allowing more larvae to survive to pupation.

Another possible explanation for this observation is that, when under attack, pea plants naturally produce a defence compound (pisatin) that has been shown to deter feeding from some insect species, including weevils. However, a number of Fusarium species, including F. avenaceum, F. solani, F. oxysporum, and F. graminearum, are able to break down pisatin. Therefore, if pisatin is toxic to PLW larvae, then it’s possible that the presence of Fusarium could increase PLW larvae survivability.

Field environment adds complexity
Field trials using insecticide and fungicide seed treatments on field pea and fababean were established in 2016 and 2017. Based on the greenhouse study results, the researchers expected to see higher root rot severity when the pathogens and PLW occurred together in the field. However, even when the insecticide seed treatment reduced nodule feeding, the disease severity did not consistently decrease.

“We also used fungicidal seed treatments to reduce or eliminate Fusarium species from the interaction, but due to the complex of pathogens causing root rots, we weren’t really able to compare pea leaf weevil damage and larvae numbers with and without root rot in the field,” Chatterton explains.

Cárcamo attributes the complex results to the multiple factors interacting in a field environment, which led to large variability in their findings. “The insecticide seed treatment was the only clear treatment that may protect yields; the fungicides were too variable. There appeared to be no antagonism between the fungicide and the seed-coated insecticide.” The authors did note that the fungicide treatments were evaluated at later node stages (7-node stage), and further study is needed to evaluate their performance in root rot suppression at earlier crop stages.

“This study illustrates the complex interactions that occur among plants, insects and pathogens, and the multidisciplinary approach – bringing together entomologists and pathologists – required to begin to elucidate such mechanisms, especially in the cryptic underground root zone,” Cárcamo concludes.