"IDC [iron deficiency chlorosis] was much more of a concern [this year] than in previous years,” says Dennis Lange, pulse specialist with Manitoba Agriculture. Symptoms persisted for 14 to 21 days rather than 10 to 14 in typical years. 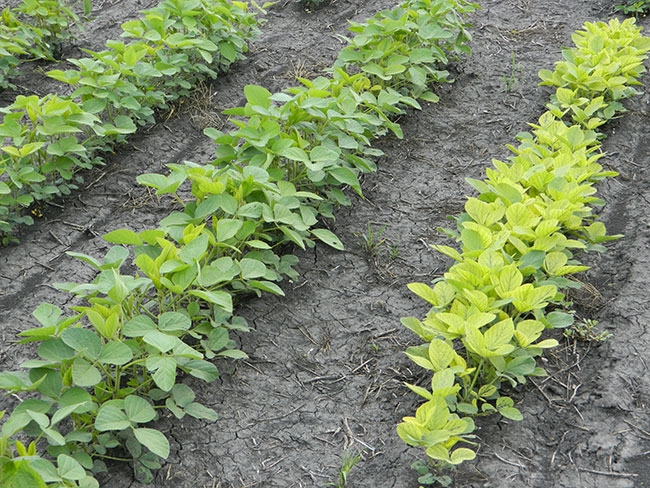 Symptoms of IDC typically show up in the second and third trifoliate stage, if the plant is unable to take up enough iron from the soil. A plant with IDC will have interveinal chlorosis, which is a yellow leaf with a network of dark green veins. More severe symptoms include entire leaves turning yellow. If severe, the outer edges of the leaf may turn brown and die. There may be an overall yellowing of the soybean field, especially during the early vegetative stages of soybean growth.

Although most Prairie soils have very high levels of iron, high levels of calcium carbonates (lime), soluble salts, and high pH can inhibit iron uptake. These factors can vary across the field and between fields.

“Part of the reason IDC was more common in 2017 relates to the wetter 2016 growing season when salts were brought close to soil surface with a higher water table and then with the drier weather in 2017, those salts were stranded near the soil surface. We never had the rain to push the salts back down,” Lange says.

Lange points out that soybeans often outgrow IDC when normal growing conditions allow the soybean plant to eventually access and take up iron from the soil. New plant growth will be a healthy, normal green colour. However, iron is very immobile in a soybean plant so iron in the new growth will not move to leaves with symptoms nor will they recover and turn green.

In Manitoba, yield is not usually impacted. However, if IDC persists into the fifth to sixth trifoliate stage, yield loss may occur. Research at North Dakota State University found that IDC can cause yield loss if it persists.

Research from 1998 through 2000 on susceptible varieties found a nine to 19 bushel per acre decrease in yield, depending on IDC severity at the five to six trifoliate stage. The experiment varied by year, and included variables like variety, seeding rate, foliar spray, and seed treatment with FeEDDHA.

Lange says that with the lack of rain at the end of July and early August, a critical period for yield, correlating IDC to yield loss will be difficult for Manitoba soybean growers.  “It looks like we are going to have an average yield in 2017, but I think that has more to do with the weather than IDC.”

Managing IDC
When IDC is noticed in the field during the growing season, no in-crop rescue treatments are effective. Rather, Lange says growers should take note and plan field and variety selections for the next spring.

Carbonate and soluble salt levels can be obtained from soil tests. Manitoba Pulse & Soybean Growers (MPSG) has produced a Soybean fertility fact sheet that indicates different IDC risk levels based on the soil test. Current recommendations state that if fields are at moderate to high risk of IDC, soybean growers should select a soybean variety with a good or low IDC rating.

“This year, farmers found out which fields were susceptible to IDC. If their soil tests show an higher risk of IDC, they should be selecting varieties with better tolerance to IDC,” Lange says.

Manitoba Agriculture evaluates varieties for reaction to IDC with independent, replicated trials each year, which are co-ordinated by MPSG. The ratings are taken from a site prone to iron chlorosis over the past three years. IDC tolerant varieties are varieties with lower IDC scores and perform better on soils prone to iron deficiencies. These ratings can be found in the soybean tables in Seed Manitoba published December each year, and at seedmb.ca.