Copper (Cu) is an essential micronutrient required to optimize cereal crop yield and quality. A typical 50 bushel per acre (bu/ac) wheat crop or 70 bu/ac barley crop will take up about 0.06 pounds of Cu per acre (lb Cu/ac) with about 0.02 and 0.04 lb Cu/ac contained in the seed of wheat and barley, respectively. 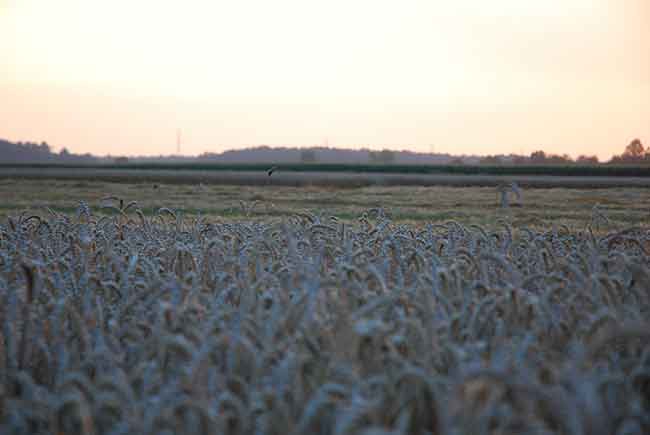 Research in the 1990s showed some cultivars of wheat were much more sensitive to Cu deficiency than others Copper (Cu) is an essential micronutrient required to optimize cereal crop yield and quality.

Most soils across the Prairies have adequate levels of Cu and do not require Cu fertilizer, but a small percentage of soils are Cu deficient and cereal crops will benefit from an application of Cu fertilizer. Copper fertilizer is expensive. From an economic standpoint, farmers only want to apply a micronutrient fertilizer if there is a reasonable chance it will increase crop yield or quality. The challenge for farmers is to determine the need for or benefit from Cu fertilizer application.

When there is adequate Cu in soil, adding more will not improve crop yield or uptake of other nutrients, such as nitrogen (N), phosphorus (P), potassium (K) and sulphur (S). Farmers should target application of Cu fertilizer on potentially deficient soils and to cereal crops that are more prone to copper deficiency. The challenge is how to do this.

The diethylenetriaminepentaacetic acid (DTPA) extractable soil test method is the standard test for determining Cu and other micronutrient metals in Western Canadian soils. This soil test is a good diagnostic tool to predict Cu deficient soils. The test is less effective at predicting reliable Cu fertilizer response when soils are marginally deficient in Cu. The critical level for Cu deficiency varies with soil type. (See the online version of this article for a table detailing general soil Cu levels and recommendations.)

Visual symptoms alone cannot be used to diagnose Cu deficiency but they can be used as part of the diagnosis. Symptoms may include:

The most notable symptoms include patchy crop and poor growth areas in a field, greater disease pressure, delayed crop maturity, and a greater risk of frost injury due to late maturing grain.

It is important to note that Alberta research found plant tissue testing of whole plants was often not effective to diagnose Cu deficiency.

More research is needed to relate plant tissue testing with Cu deficiency to improve the ability to provide a correct diagnosis.

Correction of CU deficiency
Correction of Cu deficiency can dramatically improve cereal crop yield and grain quality. Application of surface broadcast, followed by incorporation of granular Cu fertilizer into soil at a rate of three to eight lb Cu/ac, is usually the most effective to prevent Cu deficiency in cereal crops. Banding, side-banding or seed-placement of Cu fertilizer is generally not as effective as broadcast-incorporation.

Alberta research has shown broadcast-incorporated rates of less than two lb Cu/ac were not effective in increasing seed yield of wheat in the year of application, but became effective after multi-year annual applications. Research has also shown surface-broadcast application of granular Cu fertilizer, without incorporation, was much less effective in preventing Cu deficiency and improving yield of wheat versus broadcast-incorporated Cu fertilizers on Cu-deficient soils.

When Cu deficiency is diagnosed in a growing crop, a foliar in-crop Cu application can be an effective emergency correction. Foliar application at tillering to flag leaf growth stages, at rates between 0.2 to 0.3 lb Cu/ac, can be used. In extremely Cu-deficient soils, two foliar applications with Cu fertilizer, one at late tillering and a second at flag-leaf, can be most effective.

A three to eight lb/ac broadcast-incorporated application of Cu is more expensive but a single application can be effective for many years. Copper sulphate is quite soluble and is generally the least expensive source of Cu. It typically is 25 per cent copper and should be broadcast and incorporated into the soil at rates of 12 to 32 pounds per acre of product (three to eight lb Cu/ac). A foliar application will correct a deficiency if applied during the tillering to flag leaf stage, but is only effective for that season.

When Cu deficiency is diagnosed, it is a relatively simple problem that can usually be corrected with a single application of soluble granular Cu fertilizer. The effects of one application should last for up to 10 years or more.