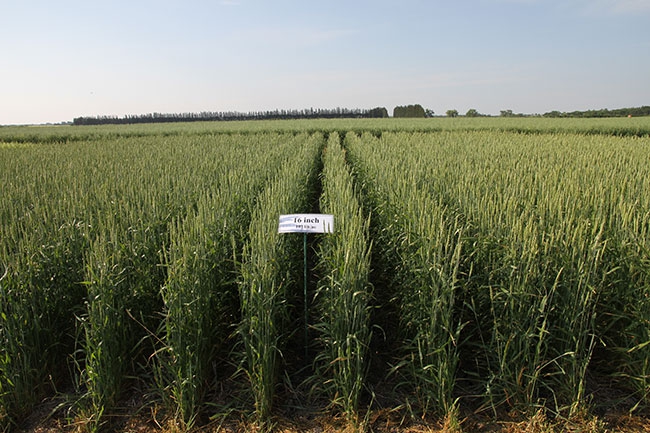 Wheat plot at Indian Head seeded at a 16-inch row spacing. Moving to wider row spacing for no-till wheat can make it easier to direct seed

“Many growers would like to go to wider row spacing for wheat or other cereals, but the main question remains how wide a row spacing is reasonable and what are the implications for side-banded nitrogen fertilizers,” says Bill May, crop management agronomist with Agriculture and Agri-Food Canada (AAFC) in Indian Head, Sask. “If we want to be able to go to wider row spacing in wheat, then we have to demonstrate that the fertilizer concentration in the side band isn’t going to be a problem.”

In 2013, May initiated a four-year study to compare four different row spacings and five nitrogen (N) rates in wheat at Indian Head. Goodeve hard red spring wheat was used in all of the trials, with a target plant population of 300 plants per square metre. Row widths of 10, 12, 14 and 16 inches were compared using five nitrogen rates: 20, 40, 80, 120 and 160 kilograms per hectare (kg/ha) of actual N plus 20-10-10 kg/ha of phosphorus (P), potassium (K) and sulphur (S) across all treatments. The sideband fertilizer configuration placed the fertilizer 1.5 inches to the side and 0.75 inches below the seed. With proper equipment maintenance, good seeding conditions and speed, this separation from the seed should remain consistent.

“The most important outcome from our research is that fertilizer had no effect on plant density,” May says. “The N rate had no effect on plant population, indicating that fertilizer placed 1.5 inches to the side and 0.75 inches below the seed is a safe configuration. Therefore, there was no negative impact of the fertilizer sideband as the row spacing widened and the concentration of the fertilizer in the sideband increased. As expected, as the fertilizer rates increased so did the head density or the number of heads per square metre, peaking at 120 kg/ha actual N. Grain yields and biomass also increased as N rates increased.”

“The question is why did we see this yield decrease in only one of four years of the trial, and in the highest yielding year, and not in others,” May asks. “Is this common for wheat in general, or is this a result of this particular wheat cultivar we used in this trial? We still need to finalize the agronomic data analysis to see if we can determine the reason. We also want to continue the research and compare different hard red spring cultivars and include durum wheat varieties as well.”

May adds that, for now, based on the limited data available in cereals, it looks like going to a wider row spacing up to 14 inches should not be too detrimental for wheat. Growers need to bear in mind, however, that although 14-inch row spacing looks okay with wheat, occasionally they can run into a yield decrease. How often that will happen is still unknown. An earlier oat row spacing project led by AAFC’s Guy Lafond showed grain yield was similar among 10-, 12- and 14-inch row spacing, with a 13 per cent yield decrease at 16 inches. So, going beyond 14 inches for both oat and wheat may be problematic, and in some years, it may result in a yield decrease.

“The data shows that there is little difference between 10- and 12-inch row spacing, however, moving from 12 to 14 inches is where growers can occasionally run into a yield decrease,” May says. “We aren’t going to discourage growers who want to go to wider row spacing, but we also don’t want to mislead them. We are interested in continuing to try to determine if yield losses are generally one in four years, as our study showed, or is it one in six or 10 years?”