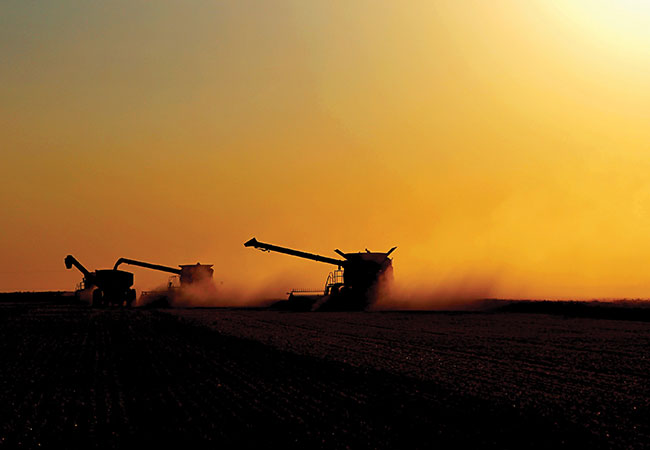 There’s plenty of research in modeling technological change in U.S. yields. But, until last year, there was almost no corresponding work for Canada, according to Alan Ker, a professor in the University of Guelph’s Department of Food, Agricultural and Resource Economics and the Ontario Agricultural College Research Chair in Agricultural Risk and Policy.

Ker and his student Horlick Ng are the authors of one of the first such studies anchored in a Canadian context, which will be published in the Journal of Agricultural and Resource Economics in 2020.

Much of Ker’s research focuses on estimating insurance premium rates. To do this, he says, he looks at yield distributions and assesses changes in yield risk with respect to climate and technological change.

In Canada, average yields have approximately quadrupled for corn, tripled for canola and doubled for soybean and wheat, according to 2018 Statistics Canada data cited in Ker and Ng’s study.

Innovation, in seed genetics for instance, is expected to be critically important in yield resiliency and economic development in the long term, Ker points out. Publicly subsidized crop insurance programs help mitigate the risk of low yields for farmers. If effective crop insurance programs are in place, farmers may be more likely to adopt high-risk high-reward technologies, making Canadian agriculture more competitive on the global stage.

Compared with the vehicle industry – for which premiums are calculated on the basis of hundreds of thousands of data points – in the U.S. and Canada, crop insurance premiums are very difficult to estimate, says Ker, because the drivers of yield loss are continually changing.

“I’m sure there’s plot data here and there, but in a bigger, more macro sense of what’s going on in farms as a whole, I don’t believe there’s much out there,” he says. “This research attempts to fill that gap.”

In Ker’s study, country-level yield data was only available for Alberta, Saskatchewan, Manitoba and Ontario, but was of insufficient length for Alberta and Manitoba to be included in the models.

Study results
For his study, Ker’s goal was to look at the effect of technology and climate on yields when times are bad as well as good. Using country-level yield data, the study estimated the structure of technological change for barley, canola, corn, oats, soybean, and wheat using mixture models.

Ker found that all yields tend to go up overall whether in good or bad years in Canada, but the shortfall between bad and good years is getting spread out.

“Even though yields are going up in both good and bad years, they’re going up more quickly in good years. However, during bad years, that shortfall is going to be bigger and that might cause more issues for the farmer economically,” he explains. “That’s where crop insurance steps in, to provide a safety net. That’s why we have those programs.”

New technologies allow farmers to produce yields that would have been unheard-of 30 years ago, he says, without much more land.

For example, a farmer’s overall income might have gone up from $50,000 to $100,000, but their shortfall has also increased to $20,000, Ker explains, meaning risk management has become much more important.

“We’d much rather be in the situation where we’re making $100,000 with a possibility of it dropping to $80,000. But we have to manage things appropriately for that shortfall,” he says.

Corn, for example, is becoming more sensitive to precipitation downfalls, because with increased seeding rates the demand for rain on a given acre has gone up. “So of course, if water demand goes up and the supply of water is constant, then in those years where we have less precipitation, we will see more of a drop-off than we would have otherwise, but we are still much better off planting at that higher density,” he says.

In other words, relative yield risks are smaller, but absolute risks are higher because dollar values are bigger.

“Again, I think we’d much rather be in the situation where we are making more with the chance of a bigger drop-off. But it would be better if both relative and absolute risk were decreased,” he says.

Is this scenario achievable? Ker says he isn’t sure. The more farmers push the boundaries of what is possible, making more efficient use of their land, the more susceptible they’ll be to, say, extreme weather events – because there are more plants on an acre. But new technologies – like drought- or flood-resistant seed – can also make those crops more resilient.

This research just scratches the surface, mainly due to the lack of relevant data. Ker’s team is now focusing on climate change and disease, and whether a warming climate will make plant and animal agriculture more susceptible to disease.

“We’re always limited by whether or not we have data to address a question,” Ker says. “We’ve started down that road in the U.S. and now we’re looking at it in Canada.

“It’s a hard question to look at – we might not see it yet in the data. Is it because there’s very little additional risk, or because farmers are very good at adapting?”