Spelt is the most commonly grown hulled wheat on the Prairies, with a few thousand acres in production. There are currently four registered spelt varieties available to growers. Spelt tends to be later maturing than spring wheat and often buyers require it to be dehulled, which requires specialized equipment.

Researchers at the University of Saskatchewan continue to work on developing spelt, einkorn and emmer varieties with agronomy and market specifications requested by growers and processors.  Currently, einkorn and emmer are grown on minimal acreage in the province.

Free-threshing heritage wheat varieties such as Red Fife and KAMUT are also later maturing varieties grown for specific markets.  Red Fife was one of the first wheat varieties grown in Western Canada in the late 1800s and was known for its good milling and baking qualities.  It is no longer a registered variety and direct sales are made between producers and end-use markets such as artisan bakeries.

KAMUT is a trademarked wheat variety grown on an estimated 50,000 acres in southern Saskatchewan. It is only grown on contract with two companies in the province (Prairie Heritage Seeds Organics and Artesian Acres), who provide both access to seed in spring and delivery options in the fall. KAMUT wheat grows well in any areas that can grow high-quality durum successfully, and care must be taken to avoid excess damage to the large kernels during threshing and transportation.

In recent years, researchers in Western Canada developed a wheat breeding “proof of concept” program to compare new wheat varieties selected under organic and conventional management.  Results showed that the best populations selected under organic management performed better than the top lines developed under conventional management, in organic systems. Based on these results, researchers at the University of Manitoba developed the participatory wheat breeding program. This program works with organic growers to seed small areas with new wheat populations and then actively rogue out poor-performing plants within each plot. Growers will save their seed and continue this process over several years, with the goal of developing genetically diverse wheat varieties that are specifically adapted to their growing region.

Consumer interest in heritage wheat products continues to develop for a number of reasons.  They are often described as having a sweet or nutty flavour, and some are noted for having enhanced mineral, carbohydrate or protein characteristics. Consumers with mild wheat allergies can often tolerate products made with these heritage varieties, as the gluten protein tends to be more digestible.  However, heritage wheat products still contain gluten and are unsuitable for people affected by celiac disease. 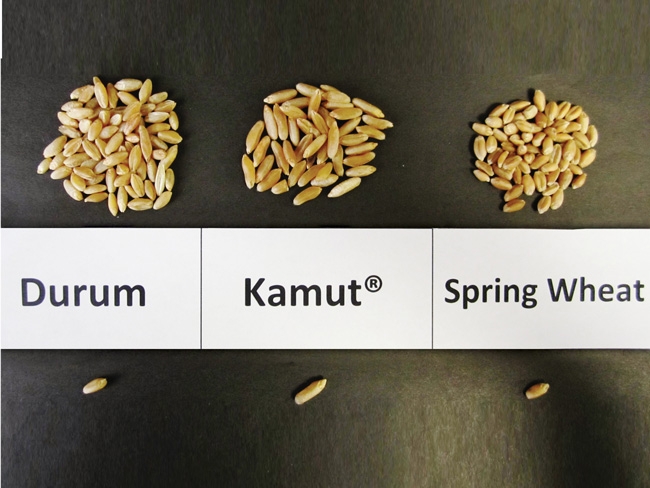