Farmers are familiar with the ongoing debate of organic versus conventional grain and oilseed production. Most will agree that growing crops in an organic system carries environmental benefits, but also wonder about the important bottom line.

Can they earn a reasonable profit or will they have to make a financial sacrifice if they switch to organic production? And can organic crops be grown efficiently on a large scale in a Canadian prairie environment?

University of Manitoba plant science professor Martin Entz and colleagues have spent the past seven years working to answer these questions on a test site near Carman, Manitoba. Here they expanded and tested some of the small-scale work they’ve done on organic production for more than 20 years at the university’s Glenlea Research Station, 20 kilometres south of Winnipeg.

“We converted about 16 acres of our farm in Carman to organic production,” says Entz. Each of the organic and conventionally grown crops was cultivated on a two-acre field.

The research study also aimed to discover the effect of reduced tillage on an organic system, and Entz says the results were a very positive surprise, showing that tillage could be significantly reduced. “Tillage was used in only four of six years, so we are 30 percent no-till in this organic system.” 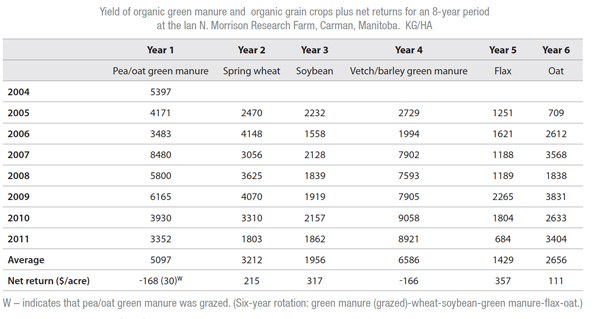 While the study’s economic results are still being tabulated, Entz says the organic crop yields were very encouraging. Visitors to the test farm’s field day last July commented on how lush and clean the organic fields looked.

Some of the approximately 160 people at the 2012 field day were other researchers and farmers who had come to the site in previous years and they expressed their amazement over how the organic crop rotation had such a positive effect on yields.

The organic fields even fared well in the less-than-ideal 2011 growing season, when farmers in the Carman area faced late seeding because of flooding, followed by a summer drought. Another unexpected result stemmed from the addition of between 12 and 22 ewes and lambs that were allowed to graze on the pea/oat green manure crops. Entz says a high percentage of the crop’s biomass was consumed, thereby turning what is traditionally a net loss into profit. While keeping sheep might not appeal to every farmer, he believes the research shows it has positive economic potential. 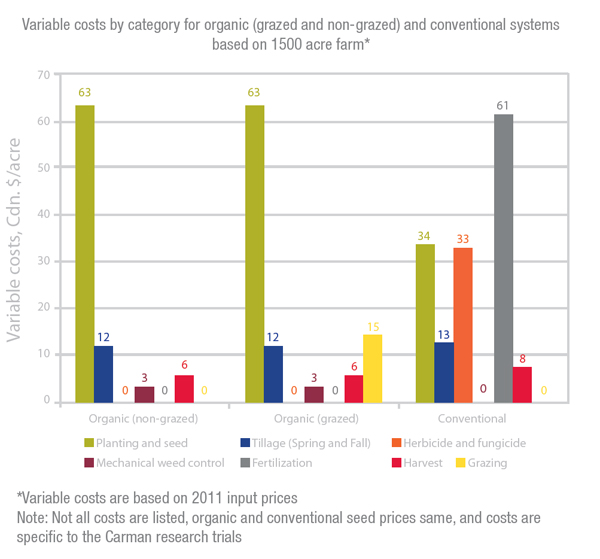 Entz says weeds were the main concern in the organic crops. In-crop harrowing using a Lely weeding harrow was done in the wheat and soybean fields. This work was very important to the success of these crops as the in-crop harrowing kills small-seeded broadleaved weeds such as wild mustard, buckwheat, redroot pigweed and green foxtail. The soybeans were row cropped with inter-row cultivation. The researchers discovered that solid-seeded organic soybeans did not work as well due to weeds.

Fall tillage was conducted as late in season as possible to reduce erosion risk and to kill Canada thistle. “Diseases were not a factor given the superior rotation in the organic phase,” notes Entz. “When you only grow wheat once in six years, fusarium and leaf diseases are not a big issue.”

The flax crop was no-tilled in the rolled hairy vetch/barley green manure and was found to definitely have less pasmo than flax grown in the conventional system.

The preliminary results show variable costs for planting and seeding being $63/acre for organically grown crops versus $34/acre for conventional, with the spring and fall tillage costs running close to $12/acre for both. The herbicide and fungicide costs for the conventional crops averaged $33/acre compared to $3/acre in mechanical weed control for the organic crops. Fertilization costs for the conventional fields averaged $61/acre, and harvest costs were approximately $7 for both systems. The cost of grazing in the organic green manure crops was $15/acre for fencing and watering.

Entz says based on fixed and variable costs, the net return on the conventional crops was $153/acre; for the organic system with grazing it was $144/acre; and for the non-grazed organic crops it was $111/acre.

The organic rotation at Carman is continuing, but the future focus is on further reducing fossil fuel energy use in the system. 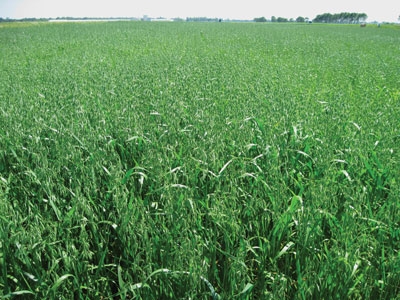 An oat crop grown under organic conditions. Can organic crops be grown efficiently on a large scale in the Canadian prairie environment?