When we look at a wheat field waving in the wind, we don’t see the incredibly complex community of micro-organisms associated with those plants. But with the help of DNA sequence-based methods, researchers are starting to shed light on that complexity. They’re finding that the microbial community’s characteristics are critical to the success or failure of those plants.

“We’re looking at the plant as it really exists, which is a plant-microbe consortium. And it’s that biological system that is healthy or unhealthy, or robust or fragile,” explains Dr. Sean Hemmingsen, research officer with the National Research Council Canada (NRC) in Saskatoon, Sask.

Hemmingsen is leading the project, which is one of six initiated by the Canadian Wheat Alliance. Partners in this alliance are the NRC, Agriculture and Agri-Food Canada (AAFC), the University of Saskatchewan (U of S), and the Province of Saskatchewan. They have made an 11-year commitment, starting in 2013, to support and advance research that will improve the profitability of Canadian wheat producers.

Hemmingsen’s own interest in microbial communities has its roots in his post-doctoral research in the 1980s. “I was studying what we thought was a novel plant protein that was doing something a little bizarre in plants. My research led me to learn that in fact we were dealing with a universal protein that was performing a universal function that is essential for virtually all cell types.

“The function of the protein is to chaperone protein folding – in other words, to allow protein folding to occur in the cell without problems happening.” Proteins need to fold into the correct three-dimensional form to be able to properly carry out their functions.

It turns out that these primers are extremely useful for distinguishing between different microbial species. For example, instead of sequencing the full genomes of all the microbes in a soil sample, researchers use the primers to target that region, using it as a DNA marker or “DNA barcode,” and they sequence that marker in every organism in the soil sample to identify the different species.

Since 1999, Hemmingsen and his colleague Dr. Janet Hill have been developing and improving microbial detection and identification methods using chaperonin-60, in combination with the NRC’s expertise in high-throughput DNA sequencing. High-throughput sequencing is key because microbial communities can have huge numbers of micro-organisms and a wide diversity of species. For instance, a single soil sample might have thousands of micro-organisms.

Hemmingsen and Hill have been using these methods in collaborative studies with experts in other disciplines. They have found that the characteristics of microbial communities within humans, animals and plants have significant effects on human, animal and plant health, respectively.

“Molecular methods that we’ve developed based on DNA sequences give us a way of looking at the microbial communities, understanding what is present, and understanding what kinds of activities the things that are present are doing at a molecular level,” says Hemmingsen.

He emphasizes that microbial communities have to be understood and managed on an ecological basis. “It’s not just the presence or absence of a particular organism. It is all the different organisms that are present and their complex interrelationships that matter. You can have a field that has a particular pathogen in it, but you can happily plant a crop there because the microbial community is such that the pathogen never gets a serious chance to harm the plants. But under different conditions, the pathogen would devastate the plants.”

Fortunately, DNA-related technologies are advancing by leaps and bounds. In particular, the power of these technologies, including the ability to analyze the data, has skyrocketed. At the same time, sequencing costs have plummeted. This combination is allowing the project’s researchers to study and understand wheat-associated microbial communities at a whole new level.

The technology enhancement component includes several activities. For instance, the researchers are figuring out how to best use the available and newly emerging DNA sequencing technologies to drive down the cost per sample for the microbial community analysis. They are also comparing chaperonin-60 with other universal markers. Some types of universal markers work better than others for certain types of organisms, so using several markers will ensure the researchers haven’t missed any groups of organisms. As well, using several markers means the project’s results will be comparable to the results from many other studies.

In the three field studies, the researchers are looking for patterns and trends in the microbial communities under different field conditions, and trying to figure out which micro-organisms and groups of micro-organisms might be acting in a beneficial or harmful way in a given circumstance.

One of the three field studies is led by Dr. Myriam Fernandez, a plant pathologist with AAFC. Her study aims to determine how practices like herbicide application, tillage and crop rotation affect a wheat crop’s yield, quality, disease levels and so on, and how that relates to the characteristics of the microbial communities living in the soil or within the plant.

Hemmingsen explains that other studies have shown that agricultural practices can affect plant-microbe relationships. For example, tillage interferes with fungal-plant interactions, and agrochemicals influence the soil microbial ecology in various ways. Fernandez’s study will help clarify just how wheat growers can adjust their practices to get the full benefits of the microbial community for their crop.

Dr. Curtis Pozniak, a wheat breeder at the U of S, is leading the second field study. He has picked 10 elite wheat cultivars as representatives of the genetic range of modern wheat varieties. He’s applying just enough fertilizer to get the crop established, but nothing more. The idea is to assess the cultivars’ relative ability to interact with soil microbes to acquire nutrients.

“Most people have heard of the relationship between Rhizobium bacteria and leguminous plants, like peas, [where the bact-eria provide nitrogen to the plant]. But such [nutrient-supplying] relationships are far more widespread than many people might be aware of,” says Hemmingsen. “They are give-and-take relationships. The plant puts a lot of the energy into fixing carbon dioxide from the atmosphere into organic carbon, and it spends a lot of that carbon keeping the bacteria and fungi that are beneficial to it, happy. In return, those bacteria and fungi provide the plant with a serious amount of its nutrients.”

These types of nutrient-supplying plant-microbe relationships allow a farmer to reduce chemical fertilizer inputs. They also offer environmental benefits because they reduce the risk of nutrient losses to the water and the air.

However, for many decades, elite wheat cultivars have been bred to perform well when given the nutrients they need in the chemical form that they can use directly. Hemmingsen says, “So we’re asking the question: are any of the cultivars better at fending for themselves because they have retained the ability to work well with the [nutrient-supplying] bacteria and fungi in the soil?”

NRC scientist Dr. Shawna MacKinnon is heading the feasibility study in the project. She is exploring the possibility of applying single-celled algae to agricultural fields and assessing how such applications affect wheat crops.

Hemmingsen explains that agricultural areas near the ocean have a long history of applying kelp, multicellular algal seaweed, as a soil amendment. “Researchers have found that these algal seaweed amendments have various benefits to the plants. To a certain extent they are acting as fertilizers, but they are also affecting some plant hormone activities and in some cases producing a disease-suppressive effect.”

MacKinnon’s study is related to an NRC program to investigate the potential for carbon capture by single-celled algae. The idea of that program is to create useful biomass while reducing greenhouse gas emissions from carbon sources like the oil industry or livestock manure. “Knowing that the algal carbon capture program was being developed, Dr. MacKinnon wondered if any of the algae tested in that program might have the same kind of beneficial characteristics as seaweed,” says Hemmingsen.

Two other key team members in the wheat-microbe project are Matthew Links, a computational biologist and biomathematician, and Dr. Tim Dumonceaux, who has expertise in microbial communities and molecular methods. They are both with AAFC.

By deepening our understanding of the role of microbial interactions in wheat production, the project’s results will help farmers manage those interactions to improve crop yield and quality, increase the crop’s ability to withstand stresses like disease, and decrease fertilizer inputs.

In the bigger picture, Hemmingsen sees even greater promise ahead for such studies. “I think if we could leap 20 years forward and look back to now, we’d be looking at the beginning of a really productive time in agricultural research, where we are really starting to come to grips with the potential that can be gained from understanding and managing the plant-microbe biological system.” 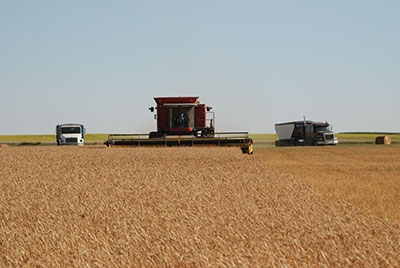