Researchers are working with growers to find ways to integrate biocontrol agents into their pest management strategies for dealing with pests such as cereal leaf beetle, lygus bugs and wheat stem sawfly. In cereal crops there aren’t too many perennial insect pests, and the ones that are a problem are often difficult to control with foliar insecticides, so biocontrol agents may offer an alternative option.

“Although we are working on biological control for several crop insects in Western Canada, the one that we currently have the most data on and are promoting most intensively is a beneficial wasp biocontrol agent for cereal leaf beetle,” explains Héctor Cárcamo, research scientist with Agriculture and Agri-Food Canada (AAFC) in Lethbridge, Alta. “Cereal leaf beetle is a pest of most cereal crops as well as cultivated and non-cultivated grasses. This pest is also a major concern and trade irritant for hay exports to the U.S., where several jurisdictions have restrictions on hay products that have not been fumigated or sterilized in some form against cereal leaf beetle.”

The cereal leaf beetle, first identified in southern Alberta in 2005, is now found in different parts of Western Canada. The highest populations are still in southern Alberta, near Coaldale and east. Although growers have reported seeing a lot of stripping of leaves on cereal crops, so far the pest levels have not reached threshold levels that make spraying necessary. The cereal leaf beetles are possibly being transported in hay and are appearing in areas where they weren’t located before, such as the Swan River Valley in Manitoba, southwest Manitoba, Edmonton, Lacombe and Olds, Alberta, and in southeast Saskatchewan.

“The good news is that the parasitoid wasp has been very effective at reducing the numbers of cereal leaf beetles and it has followed the expansion of the beetle across Western Canada,” says Cárcamo. “The Tetrastichus julis wasp is small, but very efficient, and if there are cereal leaf beetle larvae in the area, they will find them. We’re not sure how far they fly, but they are able to travel at least hundreds of metres, as they are quite good at following the larvae in areas where the beetle has invaded.”

T. julis overwinters as pupae in the soil, emerging in the spring or early summer, so it is important for growers to reduce tillage and not spray with an insecticide. The T. julis wasp kills the beetle by boring into the beetle larvae. The wasp lays about five eggs, which hatch in the larvae and devour the beetle. This beneficial wasp only attacks the cereal leaf beetle and does not pose a risk to other insects or humans. In areas where T. julis is well established, beetle populations can be reduced between 40 to 90 per cent, and yield losses can be prevented without using insecticides.

Cárcamo and his team continue to evaluate cereal leaf beetle larvae in new areas as the beetle expands its range, and if no parasitoids are present, then they relocate T. julis adults to those locations to become established and provide control. T. julis are reared in a lab in Lethbridge or collected from the field. In July 2014, T. julis adult wasps were sent to Lacombe and Edmonton, and to locations in Saskatchewan and Manitoba.

“We are also doing a study of landscape effects on the introduction of the beneficial wasps, and have a graduate student at the University of Manitoba who is assessing the populations of the parasitoids in about 30 fields in southern Alberta,” adds Cárcamo. “This information will help us develop a better understanding of the populations of both the cereal leaf beetle and the T. julis, as well as developing better recommendations.”

Cárcamo has developed a factsheet with information about cereal leaf beetle and biological control with T. julis.

Looking for lygus bug biocontrol
In another project, researchers are trying to determine which biocontrol agents could be effective for control of lygus bugs, which are a pest in crops such as oilseeds, pulses and legumes. “We don’t currently have an effective biocontrol agent for lygus, but we are evaluating what native parasitoids we have on lygus,” explains Cárcamo. “We have identified a few native parasitic wasp species, Peristenus sp, that kill the lygus in the nymphal stage; however, they are not very abundant and attack lygus at low density. Therefore, we are conducting an environmental study with an exotic wasp introduced from Europe into the U.S. for control in alfalfa. We are testing this species, Peristenus digoneutis, to see if it can control lygus in Alberta and to determine if there are any potential negative effects on our native beneficial species.”

The introduced P. digoneutis wasp has spread naturally from the U.S. to Ontario and Quebec, but so far has not been found in Western Canada. Cárcamo is testing the P. digoneutis wasp in the Lethbridge quarantine facility to determine if it will be effective. Although he is not sure if it will get established in the drier prairie climate, it is worth evaluating.

“We have a graduate student at the University of Lethbridge who is doing competition studies to compare this exotic wasp with our native wasp,” notes Cárcamo. “However, we are finding it difficult to rear the native wasp and increase the population to high enough levels for the study.”

There are also beneficial wasps that can control wheat stem sawfly. The parasitoid wasp, Bracon cephi, is being found in higher numbers in southern Alberta. Other work being led by AAFC researchers at other research stations in Canada is focused on trying to find a biocontrol agent for cabbage seedpod weevil, but so far they have not identified any species that are considered effective or safe to use. They continue to look for other species of parasitoid wasps that may prove to be suitable.

“Our main recommendation for growers is to avoid spraying insecticides in order to encourage the survivorship of beneficial wasps and other biocontrol agents,” explains Cárcamo. “Other beneficials, such as ladybird beetles, have been found to feed on cereal leaf beetle eggs and other pests, so improving their chances of survival is important. In cereals, if wheat midge is a serious problem, then insecticides should only be sprayed early before the crop has headed out. Once the crop has headed out, the midge has already laid eggs and it is too late for control. As well, the beneficial wasps are more active at this time.”

In the few situations where cereal leaf beetle may reach threshold levels, growers should leave an untreated refuge area, such as near a pond or coulees, and hope that the parasitoid will survive there. Where wheat stem sawfly is a problem, growers are recommended to leave stubble as high as they can to allow the beneficial wasp to overwinter and have enhanced survivorship.

These research projects show that insecticides can be integrated with biocontrol agents. Where possible, growers should avoid spraying insecticides at all, but if necessary, then they can follow a few simple recommendations to try to enhance the survivorship of the beneficial insects.

“Sometimes when growers see insect pests they may think they have a serious problem. But in most cases, by spraying an insecticide when the pest is not at threshold they are probably just doing a disservice in the long run,” says Cárcamo. “If they can avoid using insecticides, they can improve the conditions for beneficial insects and protect their yield at the same time. Beneficial insects can play a key role in integrated pest management strategies and provide growers with a long-term economical and environmentally friendly option for dealing with pests.” 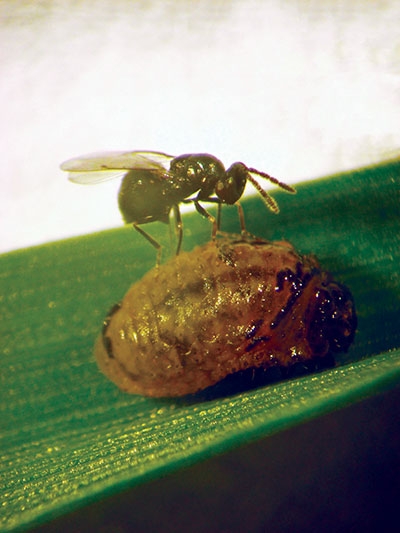