For Prairie flax growers, the summer of 2009 is etched in time. European officials had tested two loads of Canadian flax and found genetically modified material. The GMO flax contained a low level presence of CDC Triffid, a variety developed in the 1980s and 1990s but never sold for commercial production. Somehow, the gene had got out of the bottle and was present in low levels in commercial seed produced from the University of Saskatchewan’s Crop Development Centre varieties. That slammed the door on export to Europe, where there is a zero tolerance policy to GMO flax.

“The EU market is very important. EU is the largest importer of flax in the world. In the past it accounted for in excess of 65 per cent of Canadian flax exports,” says William Hill, president of the Flax Council of Canada at Winnipeg, Man.

Flax trade has resumed with the EU based on a protocol of testing flax at varying stages of shipment to ensure that no GM content is present at a level greater than 0.01 per cent. That’s one seed in 10,000. While the level of Triffid contamination in commercial flax seed has fallen over the last three years, the flax industry, including breeders, seed growers, exporters, and commercial farmers, wanted to ensure that the existence of Triffid could be eliminated from the system. Their aim was to reboot the CDC varieties by reconstituting those varieties most commonly grown on the Prairies including CDC Bethune and CDC Sorrel, and two new varieties, CDC Sanctuary and CDC Glas. CDC varieties historically account for about 80 per cent of flax grown on the Prairies.

In essence, plant breeders at the CDC had to go back to their archival samples, test them for Triffid to ensure the lines were clean, and start the entire seed multiplication process over. A research team led by flax breeder Helen Booker analyzed the CDC lines for purity, and sowed them in growth chambers in 2010. From there, Booker aimed at multiplying the pure lines up to enough seed to sow the typical Prairie flax acreage.

“One million acres is the goal for 2014. The 2013 Pedigreed seed harvest is the key but we have had very good uptake of the re-constituted seed by our seed growers. We have way more Pedigreed seed in the ground coming off this fall than usual, so depending on the harvest, hopefully we’re close to the million acres of Certified seed supplies,” says Todd Hyra, SeCan Association’s business manager for Western Canada at Winnipeg.

From Booker’s growth chamber lines, only seed from pure lines were harvested, and then shipped to a winter nursery in New Zealand for production in short rows over the winter. In 2011, pre-breeder seed was produced in Saskatchewan on a Century Farm that had never grown flax before. The harvested seed was again sent to New Zealand for production of pre-breeder seed during the winter of 2011. The seed was harvested and these breeder seed lots were supplied to SeCan for product of Select or Foundation seed. It was a huge task that started with 150 plants and resulted in the production of 40,000 kilograms of Triffid-free breeder seed.

The SeCan members are multiplying the Pedigreed seed under a supplementary agreement in 2012 and 2013 that will help to ensure that the re-constituted flax seed remains Triffid-free. In 2012, the growers were required to plant the re-constituted flax only on land that had been free of flax for five years. In addition, they could not have any commercial flax production on the farm, and must process the new seed in a facility that cleans pedigreed seed under a strict cleaning protocol. The growers also agreed to dispose of the old stocks of CDC Bethune and CDC Sorrel as a grain commodity instead of as Certified seed, and with no Certified sales of re-constituted seed until Sept 1, 2013. In 2013, the same protocols were used except the new seed could be grown on land free of flax of any kind for three years instead of five years.

“I’m extremely proud of how our SeCan pedigreed seed growers rose to the challenge. We have over 100 members who produce Pedigreed flax seed and every one of them signed on to supplementary agreement or agreed to dispose of their old seed stocks,” says Hyra. “That is a powerful message that they are sending to the industry that they are serious about helping the flax industry clean up the seed supplies.”

Commercial flax growers can do their part
While the flax industry has made a herculean effort to clean Triffid out of the Pedigreed seed system, commercial flax growers can also help ensure that the GMO variety isn’t lurking on their own farm to contaminate future production. While the seed growers’ protocol wasn’t extended to farmers, Hyra says that farmers could follow a similar protocol on their farm to clean up any lingering contamination, whether it is in the field or in a bin.

Hyra explains that the whole process relies on a dilution effect with the frequency of Triffid declining each year. The launch of the re-constituted seed is a final push to cleanse the system.

“My fear of recontamination is not from the growers that have been growing and testing their flax. They are already at an extremely low level, and with a switch to the re-constituted seed, the chances of a volunteer with Triffid are minute. Flax acres are low and the risk of back-to-back flax or a tight flax rotation would be rare,” says Hyra. “My fear is that someone may still have a bin from an older supply that has not been tested and that may re-enter the market. This needs to be delivered as grain now so that it is gone from the system.”

Hyra urges all commercial growers to market any old flax seed this fall, and to purchase re-constituted flax seed for 2014. If they do want to use their own farm-saved seed in 2014, it must be tested negative for Triffid. “This is a key part of the message. The infrequent flax grower is the one we need to reach now as they would have the greatest possibility of having something in a bin that has not been tested,” emphasizes Hyra.

Hill agrees and says, “This is our best chance to eliminate Triffid from the system. Commercial stocks are very low, prices are strong and we have a clean planting seed supply to revitalize farm seed stocks.” 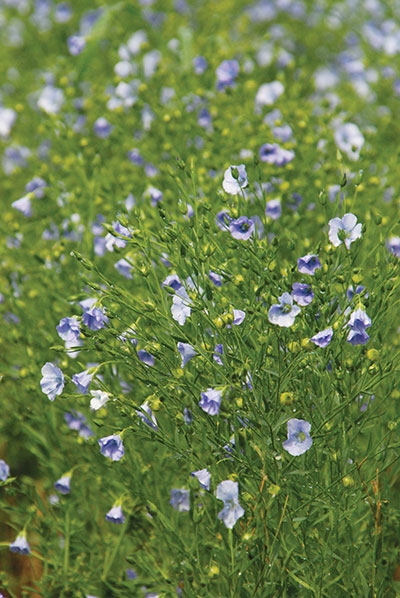 Plant breeders have made a herculean effort to re-constitute CDC flax seed to eliminate Triffid from Pedigreed seed. For Prairie flax growers