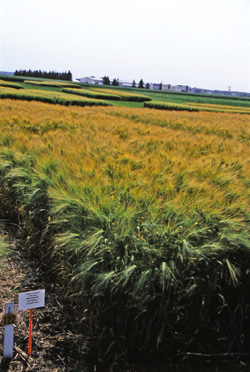 If those in the know are correct in their predictions, the long-term health
of Canadian agriculture is in danger. The common perception is that low commodity
pricing is the only culprit. But what stands to be far more damaging is the
impact of low prices, higher costs and increasing on-farm efficiencies, namely
bin-run seed. Although it comes with a sense of tradition, the practice of using
bin-run seed has come under increasing fire lately. Growers risk lower germination,
poor vigour and higher disease susceptibility. Yet, in the face of poor commodity
prices, some growers believe they have no choice, that bin-running makes economic
sense.

That mind-set, while understandable, is not practical, nor is it sustainable
for the long-term health of the seed industry in Ontario and Canada. John Cowan,
manager of Hyland Seeds in Blenheim, Ontario, acknowledges the impact of lower
prices, but looks at the 'big picture' beyond North America. "We're not
the lowest cost producer of any agricultural commodity in the world, and to
continue with our current advantages in health care and lifestyle, we'll never
be able to produce commodities for the same output costs as India, China, Brazil,
Argentina or the Ukraine," says Cowan. Plant innovations have helped increase
on-farm efficiencies, he adds, but they have not rewarded growers financially
for their use. "So as other countries continue to develop new genetics,
we'll simply fall behind in our competitiveness. It's a never-ending cycle that
must be broken."

Certified seed is an option
Despite financial hardships, Cowan emphasizes the need to continue investment
in long-term research and registration of new varieties through certified seed
sales. Without innovation, money cannot be returned to help defer costs of new
soybean or wheat varieties, the costs of which are considerable. According to
figures supplied by Cowan, costs for variety licensing and market introduction
over an eight year period can exceed $700,000. That includes a breeder, technicians
and support, land and agronomic costs, equipment overhead and expenses for facilities,
conferences, plots and travel.

To help make it easier to purchase seed, and thereby contribute more money
back to research and development, Cowan, along with other members of the Canadian
Seed Trade Association, have worked on a proposed tax credit for growers. Initially
developed by Farm Pure Seeds in western Canada, the tax credit would represent
a 65 percent premium increase over the actual cost of the seed and aid in distributing
the cost of new genetics to all members of the food chain who benefit. "It
would relieve some of the financial burden of supporting plant science research
through the grower's purchase," says Cowan. Although they have presented
to grower organizations and government officials, no one has agreed to move
forward with the idea.

Good news in the nick of time
For Philip Bailey, the potential for some sort of tax break could not come soon
enough. The extent of growers using bin-run seed, at least in Ontario wheat
fields, is approaching 70 percent for a crop that ran 1.2 million acres in 2006.
"People who are familiar with western Canada say we're not as bad as the
'west', where they're only using 14 to 16 percent certified seed," says
Bailey, marketing manager of C&M Seeds in Palmerston, Ontario. "But in
Ontario, we're talking an average of 800,000 acres of bin-run, do the math and
divide that up among the three key wheat seed companies here, and there's not
much to go around."

More ominous still is the possibility of millers and processors bypassing the
Ontario wheat grower entirely, all because of the certified seed issue. Since
the wheat industry is so reliant on downstream users for approval of variety
registrations and premiums, Bailey cautions that millers and processors could
choose to purchase their wheat elsewhere. "We're producing seven different
types of wheat, and we need some protocols and integrity in the system or else
it's going to fall completely apart," he says.

Western Canada may be able to survive higher bin-run levels because there is
essentially one class of wheat. "But once you start bin-running hard red
winter, hard red spring, soft red winter and strong gluten types, the milling
industry is going to say, 'We don't want to deal with Ontario wheat anymore'."

Bailey adds that he is seeing signs of this failing already. High yielding
spring wheats are being grown as feed wheats, which does provide opportunity
to Ontario growers, he concedes. But growers are blending these wheats and passing
them off at the elevator as milling quality wheat. There will be a point when
the millers will choose to do business with US or western Canada growers. "When
red wheats were first introduced in Ontario in the early 1980s, the requirement
for certified seed was 100 percent, because we wanted to keep control,"
explains Bailey. "What did acres and yields do? They went up. It wasn't
a negative to the industry, it was a positive and we've lost that."

Martin Harry agrees the situation with certified seed is approaching a critical
phase. He knows the soybean market has been affected by certified seed sales
in 2006 in much the same way it affected the wheat market in 2005. But he notes
that if the pricing situation were not so dire, the certified seed crisis would
not be an issue. "In all fairness, we understand the pressure the farmers
are under, we're on their side," says Harry, eastern marketing manager
for SeCan. "We understand the problem is commodity prices. If soybeans
were $9.00 and we had big IP premiums, we wouldn't be talking about this."

Leading towards greater traceability
Another positive of maintaining the certified seed situation is that consumers
are demanding greater traceability. Establishing a protocol that requires certified
seed to supply a processor or miller would be one way of securing that system,
says Bill Leask, executive vice-president of the Canadian Seed Trade Association
in Ottawa.

The difficulty is a 'chicken-and-egg' type of scenario, where producers are
being asked to put some sort of protocol in place, in the hope of capturing
the added value for those procedures. There is risk there, but so too is chance
that a market may be lost. "The millers have to insist that farmers deliver
that higher quality and if they don't, then they want to have a traceability
system in place to find out what went wrong so they can correct it," says
Leask, conceding the difficulty in capturing higher values in a society that
favours lower prices. "But if those things aren't in place, the millers
could say, 'Sorry, we may have to take our business elsewhere'."

Despite the concerns for the process of maintaining certified seed, Leask is
emphatic that the benefits outweigh any short-term difficulties, even price.
"Certified seed is one of the ways by which an investment can be made in
the future of plant breeding, future varieties and future prosperity,"
he says. There are other ways of doing the same thing, like technology use agreements
or plant breeders rights. "But if a share of the seed costs is not finding
its way back to R&D, then there won't be very much R&D in the future."
-30-