Features Agronomy Genetics/Traits
Getting the drop on pod drop

As growers know, canola seed losses before and during harvest mean a double whammy of lower revenues from the crop plus volunteer canola in the following crops. One way to reduce preharvest losses is to develop varieties that are less susceptible to these losses. To help with that, canola breeders need fast, accurate, consistent methods to measure these losses when screening breeding lines. So Prairie researchers recently evaluated different measurement methods, and they are now working on a promising new method.

“Canola seed loss has been an interest of mine since I did my PhD. In that study, we determined that on-farm harvest losses of canola averaged six per cent of yield. Although people had always known or suspected that the losses were high, I’m not sure we realized how high,” says Rob Gulden, a weed scientist at the University of Manitoba who is leading the research on measurement methods.

In 2010, about 10 years after his PhD research, Gulden led a set of studies that examined various aspects of canola seed loss. The studies were funded under the Canola/Flax Agri-Science Cluster, a partnership between the Canola Council of Canada and Agriculture and Agri-Food Canada.

Highlights of harvest loss findings
One of these studies was a survey, from 2010 to 2012, of 310 canola fields in the three Prairie provinces. The results showed seed losses were still about six per cent of total yield. However, canola yields had increased since Gulden’s PhD study because of advances like high-performing hybrids. So the total amount of seed left on canola fields was higher, averaging about 2.5 bushels per acre. That works out to be about 25 times the normal seeding rate, which makes for a huge number of volunteers.

In another of these studies, Gulden’s research group examined preharvest seed losses in detail. These losses can be classified into two processes: pod drop, where the whole pod falls to the ground; and seed shatter, where the pod remains attached to the plant, but it splits open and the seeds fall to the ground.

These two processes are often lumped together, but this study found they should be treated separately by breeders and others. First of all, the results showed that two processes were not genetically related to each other. “For instance, if a variety had higher seed shatter, that didn’t necessarily mean it also had higher pod drop, and vice versa.” In addition, although both processes were affected by genetic and environmental factors, seed shatter was influenced more by genetics, and pod drop was affected more by environmental conditions.

Gulden’s group also evaluated various ways to measure preharvest losses, including three methods already in use by researchers and industry, and two new ideas. They wanted to see which methods give the most accurate, consistent results with the least effort, and how well each method works for measuring pod drop and seed shatter. They tested the methods in greenhouse experiments and in field trials on eight canola varieties at two different seeding densities.

The three existing methods included visual ratings, catch trays and the vacuum method. Visual ratings involve looking at the plant and at the ground to determine the amount of loss. “We found that visual ratings are pretty effective for seed shatter [because you can easily see the opened pods on the plant]. But for pod drop, there is really no obvious sign on the plant, and finding pods on the ground, amongst all the leaf residue and so on, is very difficult,” Gulden says.

Catch trays are often used in research studies. Trays are placed between the rows before the canola plants mature. The trays are usually removed right before harvest for analysis; it’s straightforward to separate the losses into pod drop and seed shatter. He notes, “It’s a pretty good method but relatively time consuming.”

Gulden has used the vacuum method in much of his canola seed loss research. It involves vacuuming up all the seeds, pods and other crop residues – along with a fair bit of the soil – on the surface, after the combine has gone through the field. “It is incredibly labour intensive to get the seeds out of all that,” Gulden says. He adds, “It’s a great method for getting total harvest losses (i.e. the losses before and during harvest). However, you can’t distinguish between pod drop and seed shatter, or between what fell before and what fell during harvesting.”

One of the new measurement ideas the researchers tried was the use of digital imagery analysis software to analyze images of the ground surface. They found that currently available software wasn’t able to rapidly and accurately distinguish fallen pods and seeds from all the other crop debris and the soil.

The other new possibility is called pod retention resistance measurement. It estimates pod drop by using a force gauge to measure the force required to break a pod off a plant. The results from the researchers’ preliminary tests looked promising, so Gulden’s group is now working to refine and validate this method.

Gauging pod drop
Canola breeders have been working to reduce seed shatter, and several shatter-tolerant varieties have been released recently. But pod drop is also an important contributor to preharvest losses, so pod drop-tolerance would be a valuable trait. And a fast, reliable way to measure pod drop could help breeding programs to move forward on this trait.

Gulden’s research group is carrying out a three-year project (2013 to 2015) on the pod retention resistance method. Andrea Cavalieri, a post-doctoral researcher in Gulden’s lab, is leading this project, and Steve Shirtliffe at the University of Saskatchewan is collaborating on the study. The project’s funding is from the Canola Agronomic Research Program, which is funded by the Alberta, Saskatchewan and Manitoba canola grower organizations, in partnership with the Alberta Crop Industry Development Fund.

In the first two years of the project, the researchers focused on refining the method. For that, they worked with a handful of canola varieties and conducted trials at the University of Manitoba’s research farm at Carman and the University of Saskatchewan’s research farm near Saskatoon. Now, in the project’s third year, they are testing the method with a broader range of canola genotypes at a couple of locations in each of the two provinces. They will be analyzing the data over the winter.

“I think we’ve got a very good handle on the factors that affect the pod retention resistance measurement and how to minimize the time and effort, how many samples we need and from where on the plant. But we really need the 2015 data to confirm that,” Gulden says. “Relating pod retention resistance to pod drop is turning out to be a bit of a challenge; it looks promising but it’s not ultra-simple…. So the method looks promising, but it’s going to take a little time and a lot of sorting through data this winter to see where we’re at.” 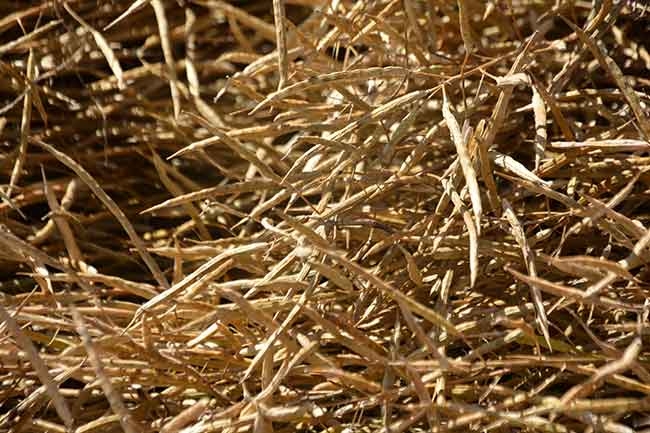