One of the greatest challenges in farming is trying to figure out what information is accurate and appropriate, and who to believe. Making fertilizer decisions is just one example.

Some agronomists encourage farmers to target crop yields of 100 bu/ac of canola, 150 bu/ac of wheat and 200 bu/ac of barley. These yields are achievable with the optimum moisture, inputs and perfect environmental conditions. But, recommendations often include high rates of fertilizers, and fertilizing for maximum yield results in lower fertilizer use efficiency vs. fertilizing for optimum yield. Sometimes recommendations include fertilizers that are normally not required. Conversely, some scientists that promote soil health claim synthetic fertilizers are “poisoning our soils” and “ruining our land” and, thus, in order to prevent soil degradation they recommend not using synthetic. What and who should you believe?

The positives and negatives
Chemical fertilizers have become critically important to replace soil nutrients that are marginal or deficient in farm fields. The direct benefit is increased crop production, which had made Prairie farms profitable. It is estimated fertilizer use contributes to increased crop production in Western Canada by at least 50 to 60 per cent annually.

We also must recognize there are downsides to using commercial fertilizers. “Salt effect” occurs when fertilizer is located with or near a germinating seed resulting in injury or death of the seedling. Injury is caused when the concentration of salts in the fertilizer is greater than the concentration of salts within the plant cells, resulting in higher osmotic pressure in the soil versus the seedling. This causes water to move out of the seedling cells and into the soil. When water moves out of plant cells, the tissue desiccates, the seedling dies and becomes blackened. The term “fertilizer burn” comes from the visual appearance of blackened seed and roots. Often the result is the eventual death of the plant tissue and seedling. Fertilizer types vary in their salt level or salt index (SI). Products such as ammonium sulphate (21-0-0-24) or potassium chloride (0-0-60) have higher SI levels (20.9 and 11.5, respectively), vs. ammonium phosphate (11-52-0) of 5.95. Products with a lower SI value are less likely to cause salt injury.

“Toxicity effect” occurs when urea [(NH2)2CO] granules are near a germinating seed and convert to ammonia (NH3). When soil moisture conditions are good, hydrogen (H+) ions from water will attach to ammonia to convert to ammonium (NH4+) to eliminate the toxicity effect. But when soil moisture conditions are not good, ammonia persists in the soil causing ammonia toxicity to germinating seedlings. Placing urea fertilizer with or near a seed can cause seedling injury depending on the rate of fertilizer used, sensitivity of the crop and soil moisture/temperature conditions.

As soils gradually become more acidic, plants can have symptoms of aluminum (Al), hydrogen (H), and/or manganese (Mn) toxicity. Deficiency of P is increased and potential deficiencies of calcium (Ca) and magnesium (Mg) may occur, particularly in sandy soils. When soil pH is less than 5.5, P forms very insoluble compounds with Al and iron (Fe); and greatly reduces P availability to crops.

Over the next 20 years, with continued fertilizer use, soil acidification may become a major soil degradation concern for Prairie farmers and research scientists.

Protecting the environment
Environmental concerns concerning water and air pollution from commercial fertilizer use has received a lot of media coverage in recent years. While N and P typically have the greatest impact on increased crop production, these two fertilizers have been linked to negative environmental impacts.

Nitrate nitrogen (NO3-N), the form of N most plants take up, is very mobile in soil and can leach under excess moisture conditions into groundwater, causing contamination. Leaching is a greater concern in sandy soils vs. medium to fine textured soils. A concentration level of 10 ppm of nitrate is considered toxic to humans and livestock.

Nutrients can be transported in runoff water into surface water bodies causing water pollution. Nutrients added to surface water will change the nutrient ratio and imbalances can have serious negative effects. P in water causes cyanobacteria bloom (incorrectly referred to as blue green algae), producing a range of toxins. Ideally, total P and total N concentration in surface water should be less than 0.01 and 0.1 ppm, respectively. Even very low P or N amounts in surface water can cause serious environmental concerns.

Wet soil conditions lead to denitrification – the process where microbes convert soil nitrate-N to nitrous oxide (N2O) – a very detrimental greenhouse gas that contributes to climate change. One molecule of nitrous oxide has the same negative effect as about 300 molecules of carbon dioxide.

To minimize environment concerns in the future, society may require farmers to very carefully match fertilizer application to crop uptake. Placing fertilizer with the seed, side- or mid-row band, or band before seeding, will be important. Use of slow release fertilizers such as ESN will help to reduce nitrous oxide release from soil. Minimizing water runoff from cultivated fields into surface water will be important. The bottom line is that in the future, society will insist that farmers be very environmentally responsible with fertilizer use to ensure environmental impacts are kept to a minimum. 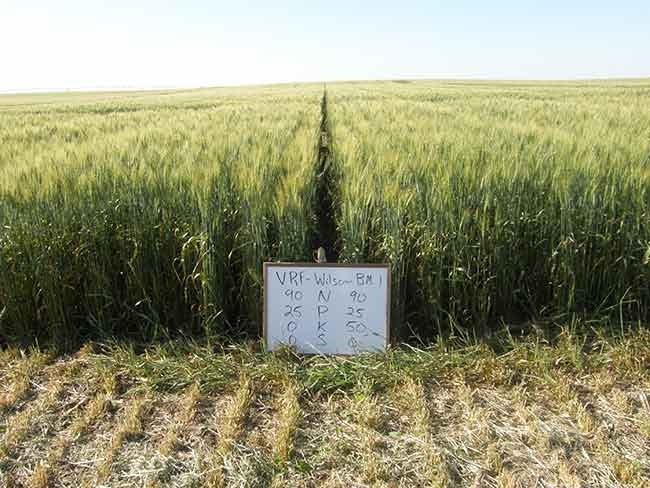