Fusarium head blight (FHB), considered the number 1 problem facing Canadian wheat producers, poses a serious risk to an estimated $5.4-billion export market. The impact of the disease is far reaching: it causes poor quality and reduced yields in the field, while mycotoxins that accumulate in the grain make it unfit for consumption by humans and animals, impacting the sale and export of quality grain.

Disease-resistant varieties are key to an integrated strategy for addressing this FHB problem. Researchers are using genomics tools such as genetic markers and plant breeding techniques to advance FHB-resistant wheat varieties. Upstream from the plant breeding efforts is research on specific genes and molecular mechanisms of disease resistance that will assist with the resistance breeding efforts.

Researchers at Agriculture and Agri-Food Canada (AAFC) are using modern genomics tools and molecular studies to try to understand the genes in wheat that are associated with FHB resistance, the FHB pathogen and mycotoxins such as deoxynivalenol (DON). “The wheat genome is very complex and FHB is a much more complicated disease than any other disease the scientific community has done molecular work with in the past 20 years,” explains Dr. Thérèse Ouellet, research scientist with AAFC in Ottawa. “We have had to collect a lot more information than in other systems just to get to this stage of our research.”

Ouellet and her collaborators are trying to identify genetic markers that are directly associated with resistance or that “express” resistance. Genetic markers are indicators pointing to specific parts of the genetic make-up of FHB-resistant varieties that enable them to fight off the disease. “We are sifting through the large number of potential genetic markers that we have identified to determine which are the most specific, and to describe among the corresponding genes which are associated with either FHB resistance or FHB susceptibility,” she says. “Until recently, we were mostly focused on finding the genes that provide resistance to FHB, but we realized that there are important genes with a lot of activity in plants that make them more susceptible. Therefore, we need to also focus on eliminating the genes that make the plant more susceptible to FHB at the same time as adding genes that make the plant more resistant.”

She adds another challenge is that the pathogen seems to be much more cunning than other ones. For example, some pathogens seem to have one strategy, while Fusarium appears to have several strategies. When researchers find a way to stop one strategy in wheat, they quickly realize that the pathogen has another way to fight back. The genomics and plant breeding efforts are working together to overcome these challenges.

“We are just on the edge of this research that is helping us understand which combination of elements in the plant provides the best resistance,” explains Ouellet. “We recently received some new funding that will help us take the advancements we have developed so far and determine which markers will really make a difference and drop off the ones that don’t have a good enough correlation with resistance for FHB. We will also be identifying existing wheat genotypes in the breeding program that already carry the subset of the important genes to help speed up the process. We continue to bring these genomic advances and information to plant breeders to help with their FHB resistance breeding programs.”

FHB and plant breeding advancements
Wheat breeders are using the genomics advances along with selected breeding strategies to try to get a high level of FHB resistance into existing good wheat breeding backgrounds. “Our goal is to combine durable FHB resistance with all of the important production traits in a package that a farmer will want to grow,” says Dr. Richard Cuthbert, wheat breeder with AAFC in Swift Current, Sask. “We are trying to combine FHB resistance with improved agronomics, quality, disease resistance and end-use quality traits to develop high yielding commercial cultivars.”

Cuthbert explains that his team also spends a lot of time in germplasm development. As part of a multiple pest resistance project, their team uses a combination of cutting edge technologies and applied traditional approaches to develop germplasm containing many resistance genes in adapted genetic backgrounds.

“FHB resistance is complex and very polygenic, meaning there are many genes involved. We are using genetic markers with phenotypic selection in disease nurseries to select the best lines for resistance,” he notes. “Markers can increase the odds of selecting the best lines and could help with selecting combinations to prevent mycotoxins such as DON. However, markers alone aren’t the answer and phenotypic selection alone is a slow process; therefore, a combination of these tools is the best strategy. Although it may not save time to market, it will improve the efficiency and predictability of the disease nursery, which ultimately improves our chances to find lines to become cultivars for farmers.”

AAFC has released some FHB-resistant varieties using more conventional approaches, including AC Cardale and AC Carberry, which are hard red spring wheat varieties with moderate resistance (MR) to FHB. More recently AAFC released a CPS Red variety, HY 1615, which is the first spring wheat registered with an R rating for FHB. However, Cuthbert notes, there still needs to be some work to improve the production value for growers, as the variety is taller and has weaker straw.

“Getting everything together is a challenge,” adds Cuthbert. “We are continuing to do a lot of research to improve FHB resistance in durum wheat for example, but so far we haven’t succeeded. Durum is a tetraploid with one less genome compared to a hexaploid of bread wheat. We still don’t know why we can’t get the resistance to express in durum like we can in bread wheat.”

Cuthbert emphasizes that for growers, the combination of FHB-resistant varieties, fungicides and best management practices is the key. “Although fungicides can play a role in managing FHB, alone they won’t work without a good level of genetic resistance in the background,” he says. “Everything has to go together. As plant breeders, we have to use both new tools like markers and old technologies for field screening to get to the stage of resistant cultivars that farmers want to grow. We expect to see more FHB-resistant varieties available in the near future.” 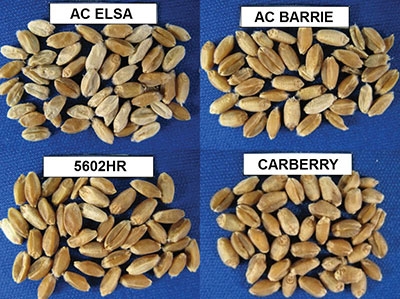